Wayne County is the most populous county in the U.S. state of Michigan. As of 2020, the United States Census placed its population at 1,793,561 making it the 19th-most populous county in the United States. The county seat is Detroit. The county was founded in 1796 and organized in 1815. Wayne County is included in the Detroit-Warren-Dearborn, MI Metropolitan Statistical Area. It is one of several U.S. counties named after Revolutionary War-era general Anthony Wayne. 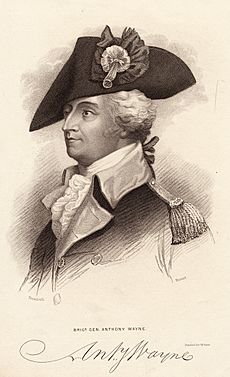 Wayne County was the sixth county in the Northwest Territory, formed 15 August 1796 from portions of territorial Hamilton County, territorial Knox County and unorganized territory. It was named for the American general "Mad Anthony" Wayne. It originally encompassed the entire area of the Lower Peninsula of Michigan, most of the Upper Peninsula, as well as smaller sections that are now part of northern Ohio, Indiana and Illinois. By proclamation of the Territorial Secretary and Acting Governor, Winthrop Sargent, on August 15, 1796, the boundaries of Wayne County were declared to begin at the mouth of the Cuyahoga River then west to Fort Wayne, then to the southernmost point of Lake Michigan and along the western shore north to the territorial boundary in Lake Superior and then along the territorial boundary through Lake Huron, Lake St. Clair, and Lake Erie back to the starting point.

These boundaries would be adjusted as Indiana and Illinois became states and as other counties were formed within Michigan Territory.

The eastern (and sometimes southern) boundary is a water boundary in the Detroit River and Lake St. Clair with Essex County, Ontario. Automotive traffic crosses this boundary at the Detroit-Windsor Tunnel and the Ambassador Bridge. Due to the southwestern course of the river, this small portion of Canada actually lies to the south of Wayne County. The southern communities of the county are usually referred to as "Downriver", in reference to their location downstream of downtown Detroit.

The Wayne County Department of Public Services was formed in 1906 as the Wayne County Road Commission. It was the government agency in Wayne County, Michigan responsible for building and maintaining the county's roads and highways.

The Wayne County Road Commission was an "exemplary" agency in the state of Michigan, and had great involvement and influence in roadway planning more widely in the state. It became "internationally renowned for innovative ideas, sometimes breaking ground well in advance of the Michigan State Highway Department."

The county road commission was more advanced than the state's own public works department in several respects. It had long had its own in-house construction group to build bridges, before the state copied that practice in 1924. It adopted one or more bridge types before the state did.

Its first commissioners were Edward N. Hines, Cassius R. Benton, and automobile manufacturer Henry Ford. While the commission was authorized by an 80% positive vote of county voters in a 1906 referendum, it was controversial and there was a Michigan state supreme court case pressed which found it unconstitutional. Commissioners Benton and Ford quit, but commissioner Hines persisted and led the commission through reorganization getting around the obstacles. Hines was a commissioner continuously from 1906 to 1938.

Hines is credited with the idea of putting a painted line down a roadway's center to divide traffic, and other innovations that were later widely adopted.

The commission worked systematically, and it became a model to others. "As early as 1911, the commission felt confident in asserting that 'Wayne County is coming to be known as a leader in the good roads movement, and the Mecca of those upon whose shoulders devolves the duty of solving traffic problems.' Within a few years, the county hosted delegations of engineers from around the United States, as well as from a number of other countries, including Britain, Japan, Australia, and Borneo.[footnote omitted] The commission's international prominence was enhanced by its advocacy of concrete as a road material. It claimed credit for constructing the country's first mile of concrete-paved rural highway, a section of Woodward Avenue" just outside the Detroit city limits.

The state relied upon the Wayne County Road Commission to provide expertise to build the Willow Run Expressway, during World War II as many state staff went into military service. The state hired the county road commission to supervise the building of the Lodge Expressway.

A number of the county road commissions' works are listed on the National Register of Historic Places.

The county road commission was merged into the general county government, becoming the Roads Division of the Department of Public Services. 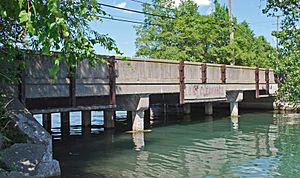 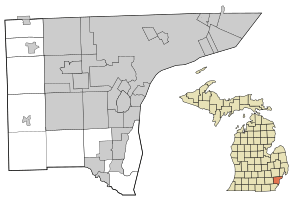 All content from Kiddle encyclopedia articles (including the article images and facts) can be freely used under Attribution-ShareAlike license, unless stated otherwise. Cite this article:
Wayne County, Michigan Facts for Kids. Kiddle Encyclopedia.