Southgate is a middle-class suburb in central Wayne County, Michigan. The population was 30,047 at the 2010 census.

Southgate was established as a city in October 1958, which was one of the last remaining portions of the now-defunct Ecorse Township, Michigan.

Pierre Michel Campau was the first white settler in Southgate. He moved into the area in 1795, which subsequently became a farming community. Other people from the Detroit area at the Rouge and Detroit Rivers followed him to Southgate.

Historically a rural area of Ecorse Township, the areas within present-day Southgate were originally platted with street grids beginning in the 1920s - though most developments did not start until just after World War II. Among the oldest residential areas in the city is the Old Homestead neighborhood, on the east side.

There are two accounts of the city's name: Southgate is described in local guides as being the "South Gate" or entrance to the Metro Detroit area. "A metropolitan daily picture story" in late 1956 also gave this explanation. 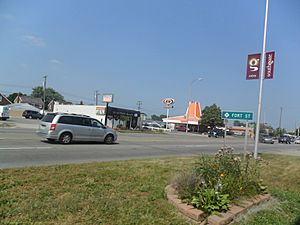 Eureka Road in the Old Homestead area of Southgate

Southgate's first mayor, Thomas J. Anderson, also stated in 1956 that the name originated from the newly built Southgate Shopping Center at the southeast corner of Eureka & Trenton roads. "We were trying to get a separate post office for our community, and were advised that it would help our cause if the township board passed a resolution creating an unincorporated village," Anderson explained. "The name Southgate was chosen because of the shopping center then under consideration, and the board agreed that it was an appropriate name. Anderson had previously suggested the city be named Southgate due to its location south of Detroit. Anderson became aware of Southgate, California near Los Angeles during World War II while temporarily stationed in San Diego, CA. The resolution was adopted at a regular meeting in the early summer of 1953."

Thomas Anderson became the first mayor in 1958 after being Ecorse Township's supervisor for the previous five years. Southgate Anderson High School was named after him in 1982.

Other roads of note

The Conrail Shared Assets Lincoln Secondary runs through the northwest corner of Southgate and is notable for the large grade crossing (one of the largest in the world) through the intersection of Northline and Allen Roads, and also has a crossing at Reeck Road.

There were 13,062 households of which 27.4% had children under the age of 18 living with them, 42.6% were married couples living together, 12.3% had a female householder with no husband present, 5.0% had a male householder with no wife present, and 40.0% were non-families. 33.9% of all households were made up of individuals and 14.1% had someone living alone who was 65 years of age or older. The average household size was 2.29 and the average family size was 2.95.

There were 12,836 households out of which 26.7% had children under the age of 18 living with them, 49.2% were married couples living together, 9.7% had a female householder with no husband present, and 37.3% were non-families. 32.3% of all households were made up of individuals and 14.1% had someone living alone who was 65 years of age or older. The average household size was 2.33 and the average family size was 2.98.

All content from Kiddle encyclopedia articles (including the article images and facts) can be freely used under Attribution-ShareAlike license, unless stated otherwise. Cite this article:
Southgate, Michigan Facts for Kids. Kiddle Encyclopedia.