Brownstown Charter Township is a charter township of Wayne County in the U.S. state of Michigan. The population was 30,627 at the 2010 census.

It is part of the collection of communities known as Downriver. Brownstown's three separate segments are due to the incorporation of the cities of Flat Rock, Rockwood, and Woodhaven in the early 1960s.

The region now known as Brownstown was, like surrounding areas in Michigan, once a part of the French Province Quebec. The area eventually fell into hands of the British and finally came under American rule in the 18th century. The original 43-square-mile (110 km2) area of land south of Detroit was designated a township by the Michigan Territorial Commission on April 5, 1827, when Moses Roberts was elected its first supervisor. This made Brownstown one of Wayne County's nine original townships.

Research from local historians have found that the township was named for Adam Brown, who was kidnapped by the Wyandot Indians. Brown was raised by the Wyandots, married a native woman and grew to become a tribal leader. As time passed, settlements spread out from the lakeshore to begin changing the swampy, sand-hill countryside into productive farm land. Established in 1893 Kurtzhals Farm is one of the largest remaining farms in the township. 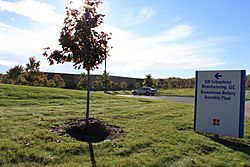 There were 8,322 households out of which 40.3% had children under the age of 18 living with them, 58.6% were married couples living together, 12.6% had a female householder with no husband present, and 24.9% were non-families. 19.8% of all households were made up of individuals and 4.3% had someone living alone who was 65 years of age or older. The average household size was 2.76 and the average family size was 3.18.

All content from Kiddle encyclopedia articles (including the article images and facts) can be freely used under Attribution-ShareAlike license, unless stated otherwise. Cite this article:
Brownstown Charter Township, Michigan Facts for Kids. Kiddle Encyclopedia.