Romulus is a city in Wayne County in the U.S. state of Michigan. The population was 23,989 at the 2010 census. Romulus is a western suburb of Metro Detroit and is also considered part of the Downriver collection of communities. It is most notable as the location of the Detroit Metropolitan Airport.

Romulus is in the south-central portion of Wayne County. Interstate 94 (I-94) and I-275 run through the city.

The City of Romulus is bordered to the north by Van Born Road, to the south by Pennsylvania Road, to the east by Inkster Road, and to the west by Hannan Road.

There were 8,975 households, of which 37.8% had children under the age of 18 living with them, 40.7% were married couples living together, 21.1% had a female householder with no husband present, 6.6% had a male householder with no wife present, and 31.6% were non-families. 26.0% of all households were made up of individuals, and 8.2% had someone living alone who was 65 years of age or older. The average household size was 2.64 and the average family size was 3.16.

The first white settler in Romulus was Samuel Polyne, a French-Canadian, who settled on section 2 in 1826, though he left soon after the township was organized in 1835.

The first settler in the area that was the village of Romulus prior to the 1865 annexation of the whole village and township into one city was Samuel McMath, who moved from New York state to the area in 1827. He improved land and planned to bring his family to settle there, but he died before he could carry out this plan.

Solomon Whitaker, Charles and Joseph Pulcifer located in the area in 1830, and in 1833, Jenks Pullen and his six sons settled at what became known as "Pullen's Corners" (located in section 19 at the intersection that is now commonly called "Five Points"). Pullen's Corners was platted in 1836. The community later took on the name of the township.

The township of Romulus was set off from a part of Huron Township by an Act of the Territorial Legislature on March 17, 1835, and the first township meeting was held on April 16, 1835, two years before the State of Michigan was admitted in to the Union (1837), in the house of Joseph T. Pullen. The first supervisor was David J. Pullen. The township's name was changed to "Wayne" on March 19, 1845, but was changed back to Romulus on January 16, 1848.

Romulus incorporated as a city in 1970.

The village of Romulus was platted on the Lansing B. Misner estate in 1871.

Romulus was a stop of the Underground Railroad in the 1800s when slaves fled the inhumane conditions of plantations in the South to the free states of the North. There were two stops in Romulus and those structures are still intact to this day.

Preston was located in the north-east part of Romulus. It had a post office from 1899 to 1906.

On August 16, 1987, Romulus was the site of the Northwest Airlines Flight 255 disaster, in which the plane serving the flight crashed into an overpass bridge and exploded just seconds after taking off.

On August 9, 2005 at approximately 9:30 p.m., the EQ Recovery Plant caught fire. Citizens within 1 to 1⅓ mile radius were forced to evacuate their homes. Romulus and Wayne fire crews and crews from neighboring communities managed to put out the fire after letting it burn down a little bit. Chemical-filled smoke filled the sky, causing respiratory problems. Many citizens from both Romulus and Wayne were taken to Oakwood Annapolis Hospital (now Beaumont Hospital-Wayne), about two miles from the explosion site. No one was injured. 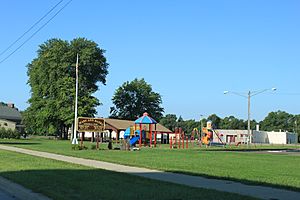 After a failed city millage in February 2011, city officials had to close all of the city parks in order to keep the city financially stable. However, the Downtown Development Authority were willing to maintain the operations of Mary Ann Banks Park & Historical Park, reopening the park in Spring 2011. By 2015, the city's finances had rebound and with determination from city officials and citizens, most the city's parks have reopened with better improvements and even opening a new park - including:

It is uncertain about the future of Jimmie Raspberry Park & Beverly McAnally Park, both on the north side of the city, and Senior Citizens Park near downtown since their closures back in 2011.

The Romulus Athletic Center, located at 35765 Northline Road, is a facility for recreation and conferences. The state-of-the-art center with fitness facilities, a basketball court and a swimming pool opened on April 1, 2008.

Released on his 2003 album entitled "Michigan", Sufjan Stevens recorded a single titled "Romulus". In 2010, "Meet Monica Velour", an independent comedy drama movie was partially filmed in Romulus along with other Detroit suburbs. 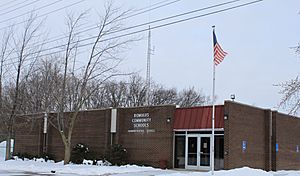 The Romulus Community School District serves and educates the children in the City of Romulus and other communities. The district is made up of a high school (Romulus Senior High School), a middle school (Romulus Middle School), and four elementary schools (Barth, Halecreek, Romulus, and Wick).

Summit Academy School is a charter school in Romulus. It has had a 100% graduation rate and 100% college acceptance rate. It has also been ranked as one of the top 5% of schools in Michigan.

All content from Kiddle encyclopedia articles (including the article images and facts) can be freely used under Attribution-ShareAlike license, unless stated otherwise. Cite this article:
Romulus, Michigan Facts for Kids. Kiddle Encyclopedia.