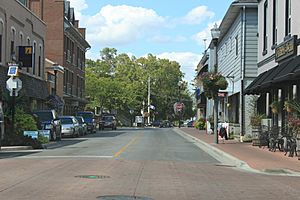 Amherstburg (2016 population 21,936; UA population 13,910) is a town near the mouth of the Detroit River in Essex County, Ontario, Canada. In 1796, Fort Malden was established here, becoming the heart of the settlement. It has been designated as a National Historic Site.

Across the Detroit River from what developed as the state of Michigan in the United States, the town was permanently established in 1796 as a British military fort. Fort Malden was occupied as a garrison. The town was developed by Loyalists who were granted land by the Crown in Ontario after the British lost the American Revolutionary War. They built many of their houses in the French style of a century before, giving the new town a historic character.

During the days of the Underground Railroad before the American Civil War, fugitive African-American slaves often crossed the river to escape to freedom in Canada, after slavery was abolished there. Detroit abolitionists William Lambert and George DeBaptiste were key and DeBaptiste owned a lake steamboat which was used to offload fugitives in town while docked ostensibly to load lumber They used Fort Malden as an entry point.

By 1869, the town of Amherstburg in the Township of Malden County Essex had a population of 2,500. Fort Malden was adapted for use as a Lunatic Asylum. Its main building was later used as a Port of Entry Money Order office and Post Office savings bank. Amherstburg was incorporated as a town in 1878.

Amherstburg is home to several tourist attractions, including Fort Malden and the North American Black Historical Museum. An Ontario Historical Plaque was erected in Amherstburg by the province to commemorate Bellevue House's role in Ontario's heritage. Bellevue House (c. 1816-19) was the home of Catherine Reynolds, a landscape painter and her brother Robert Reynolds. Additional tourist activities include the Park House Museum and the charming King's Navy Yard Park, both of which are located in the heart of old Amherstburg.

The Gibson Gallery is located in a former Michigan Central Railroad Station (c. 1896), which has been fully restored to its original beauty. The gallery operates year-round, featuring exhibits by local artists, the permanent collection of the Art Gallery of Windsor, traveling exhibits from Ontario museums and galleries, and student art/photography exhibits. A restored Essex Terminal railway caboose is operated as a railway museum. The restored Gordon House is another historic attraction of Amherstburg. Built as a residence in 1798 overlooking the Detroit River, it now houses a Marine exhibit.

The Holiday Beach Conservation Area is one of the best fall birding sites in North America. The 546-acre (2.21 km2) nature reserve contains over 2,000 feet (610 m) of beaches, picnic areas, a 2-kilometre (6,600 ft) trail along the edge of Big Creek Marsh. Holiday Beach is considered a premiere spot to view the fall migration of raptors (birds of prey). A 'Festival of Hawks' event takes place in September.

Texas Road is a street popularly associated with paranormal sightings and ghostly experiences. This stretch of road passes through a gully and it has been rumored that a man once murdered another there. Since this time people have reported strange disturbances such as car ignitions failing and paranormal light shows.

Between Amherstburg and Windsor (the nearest local metropolis), there is no regularly scheduled bus line. Amherstburg Taxi and South Shore Taxi occasionally operate a "shared ride service" from Amherstburg to the Devonshire Mall in Windsor.

Commercial rail service is provided through Essex Terminal Railway, which operates a 35 km line to Windsor.

Small boats are welcome to call at any one of three local marinas that serve Lake Erie and the Detroit River.

In the first week of every August, Amherstburg holds a heritage festival, consisting of activities at several locations around town. At Fort Malden, re-enactors depict eras ranging from the Roman Empire to the Second World War, establishing camps and performing battle demonstrations.

Art by the River (established in 1967), is an annual two-day arts and craft festival that takes place the weekend before Labour Day weekend on the grounds of the Fort Malden National Historic Site.

All content from Kiddle encyclopedia articles (including the article images and facts) can be freely used under Attribution-ShareAlike license, unless stated otherwise. Cite this article:
Amherstburg Facts for Kids. Kiddle Encyclopedia.