Boblo Island Amusement Park is an abandoned amusement park which operated from 1898 until its closure on September 30, 1993. Its amusement rides were sold in 1994.

The park was located on Bois Blanc Island, Ontario. It lies just above the mouth of the Detroit River. The people of Detroit, Michigan characterized it as the city's Coney Island. 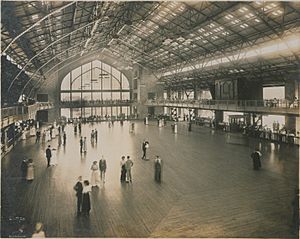 The Nightmare, Falling Star, Wild Mouse, Sky Streak, and Screamer rides, a Ferris wheel, a zoo, and a carousel were the signature attractions. To move visitors around the island, the park constructed a small railroad. Henry Ford financed a dance hall that was rumored to have been designed and built by famed Detroit architect Albert Kahn, but was later determined to have been designed by John Scott. The dance hall was the second largest in the world, holding 5,000 dancers at full capacity and featured one of the world's largest orchestrions from the Welte company: a 16 foot tall, 14 foot wide, self-playing Wotan-model orchestrion with 419 pipes and percussion section. 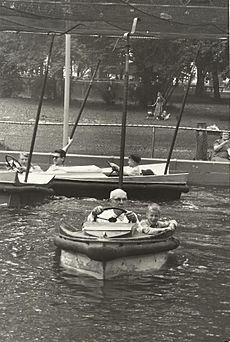 Boblo's Scootaboats, which were very similar to well known Bumper Cars, were a popular ride. The cars operated by drawing power from an overhead electric grid unlike the Bumper Boats in use today. Beginning in 1952, Joe Short, a man of diminutive physical stature, was employed as 'Captain Boblo', and traveled on the boats entertaining passengers of all ages. He wore a variety of colorful clothing, including a large hat with 'Captain Bob Lo' on the peak, and was typically equipped with binoculars for navigation purposes. He previously worked for Ringling Brothers Circus and captivated children with adventurous tales and knock-knock jokes until his retirement in 1974, at the age of 90. After the boats docked at night back in Detroit, Mr. Short continued entertaining at the local bars and taverns he frequented.

The island is a five-minute ferry ride from Amherstburg, Ontario, and 18 miles from Detroit. For more than 85 years, the Boblo Island Amusement Park was famous for being served by the Steamer Ste Claire and the Steamer Columbia excursion boats that could hold about 2,500 passengers each. The "Bob-Lo boats" boats were sold in November 1991. Other smaller ferries served the park from Amherstburg and Gibraltar, Michigan, which were located closer to the park on the Detroit River. 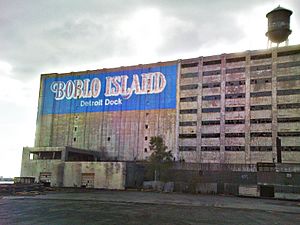 The abandoned Boblo Island Detroit Dock building in Detroit in 2010

The SS Ste. Claire was engulfed in an accidental fire while docked on the Detroit River on July 6, 2018. The fire could not be contained and destroyed the historic mahogany woodwork and upper decks. "Yeah, she's 110 years old, but she's well-built and she survived," said boat co-owner, Ron Kattoo. "We are at the point in restoration to where it was a steel skeleton structure ready to be rebuilt." Two years later, very little had been done.

The State of Michigan brought a racial discrimination case against the operators of the ferry service. After Michigan found Bob-Lo guilty and fined the company, Bob-Lo filed a lawsuit against the state, Bob-Lo Excursion Co. v. Michigan, 333 U.S. 28 (1948). The case reached the U.S. Supreme Court and resulted in a notable 1948 decision construing the scope of the commerce clause. In June 1945, Sarah Elizabeth Ray and 12 other female workers involved in the war effort (and referred to as "girls" during the legal proceedings) took part in a sponsored trip to Boblo Island. Ray was removed from the boat because she was not white, enforced according to a Bob-Lo company policy "excluding so-called 'zoot-suiters', the rowdyish, the rough, and the boisterous, and it also adopted the policy of excluding colored." The Michigan Supreme Court fined the company $25 for the discrimination they presented towards Ray. The company had claimed it could exclude her because it was a private concern operating in another country and that neither Michigan nor any other state had authority to regulate commerce with Canada (a foreign country); the United States Supreme Court affirmed the Michigan Supreme Court, which had upheld the jurisdiction of the state's anti-discrimination provisions and found against the company.

All content from Kiddle encyclopedia articles (including the article images and facts) can be freely used under Attribution-ShareAlike license, unless stated otherwise. Cite this article:
Boblo Island Amusement Park Facts for Kids. Kiddle Encyclopedia.