Kids Encyclopedia Facts
This page is about the excursion steamship, Columbia, built in 1902. For other ships with the same name, see List of ships named SS Columbia.

SS Columbia is the last remaining excursion steamship from the turn of the 20th century in existence, the second to last being her running mate and sister ship SS Ste. Claire which burned in 2018. Both were designed by Frank E. Kirby and Louis O. Keil. Columbia was listed on the National Register of Historic Places in 1979, and was designated a National Historic Landmark in 1992. As of 2019, the vessel is docked at Silo City in Buffalo, New York while work is being done to rehabilitate it. 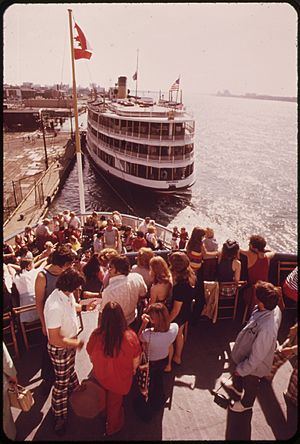 Columbia was built in Wyandotte, Michigan, in 1902, and Ste. Claire was built in Toledo, Ohio, in 1910. The naval architect Frank Kirby designed a new girder system for Columbia that allowed for the spans needed for a dance floor, thus Columbia was the first steamboat in the US with a proper ballroom. Columbia influenced the design of excursion steamers including Americana, Canadiana, Ste. Claire, Put-in-bay, Peter Stuyvesant, and Catalina throughout the US. Columbia and Ste. Claire were originally joined by a third, SS Britannia, built in 1906. During their heyday, Columbia and Ste. Claire sailed down the Detroit River from downtown Detroit to Bois Blanc Island, an Ontario island that was home to an amusement park built as a destination for the steamers. During the summer, the ship's triple decks would be filled with passengers enjoying the 90-minute, 18-mile (29 km) boat ride to the Boblo Island Amusement Park. Both ships featured music and dancing, an arcade, and a snack bar. The ships became icons on the Detroit River and were greatly loved by the people of Detroit and Windsor, Ontario, Canada.

Columbia became the setting for an historic Civil Rights battle in 1945 when a young African American woman named Sara Elizabeth Ray joined her classmates for a celebratory graduation cruise aboard the ship. Officers of the Boblo Excursion company then approached Ray and told her she had to leave due to her race. When they threatened her with physical removal, she agreed to leave but not before throwing the proffered fare refund back at them and getting their names. Ray enlisted the help of the NAACP in filing a complaint against the line for illegal discrimination. The Boblo Excursion company claimed exemption from the Michigan statutes due to their routes traversing the Canada–US border thereby claiming that they were engaged in international commerce and were not subject to state regulations. Michigan won in the local courts and then in state court and ultimately in the US Supreme court.

Due to competition from nearby Cedar Point, attendance at Boblo Island declined. In 1990, the company then operating Boblo Island said the steamers were too much to handle and were becoming a burden on the company's finances. The summer of 1991 was the last for Columbia and Ste. Claire and they were sold as a pair in the federal bankruptcy court in Minneapolis in November, 1991. In 1993, Boblo Island was closed and sold to real estate developers. The ships were docked outside the Great Lakes Steel Company in Ecorse, Michigan, where they sat unprotected from the harsh Michigan winters. They were auctioned in foreclosure in 1996 and by 2000, both steamers were showing deterioration with chipped paint, rotting wood, and holes in the decks.

In 2004 a team led by the Detroit Riverfront Conservancy had Columbia "shrink-wrapped" to reduce further deterioration while they considered purchase and restoration. However, in early 2006, given budgetary constraints they removed themselves from consideration. Later that year, with the assistance of National Trust for Historic Preservation Columbia was awarded to a New York-based non-profit group, "The S.S. Columbia Project", for restoration to active service as an educational, cultural, and Heritage tourism resource for use on the Hudson River.

Temporary alterations on both ships, Columbia and Ste. Clair, was made for the 2014 feature film Transformers: Age of Extinction.

In September 2014, Columbia was towed from Detroit to Toledo, Ohio, for dry docking in preparation for moving to New York. In September 2015, she was moved to Buffalo, New York, where she is being prepared for an eventual move to the Hudson River.

The video for the 2017 single "Score The Sky" by the UK band Lost Horizons was filmed at locations including the SS Columbia.

All content from Kiddle encyclopedia articles (including the article images and facts) can be freely used under Attribution-ShareAlike license, unless stated otherwise. Cite this article:
SS Columbia Facts for Kids. Kiddle Encyclopedia.