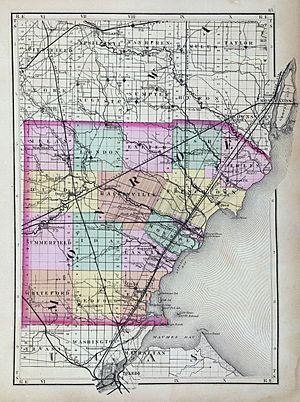 Map of Monroe County from 1873

Monroe County is a county located in the U.S. state of Michigan. As of the 2010 census, the population was 152,021. The largest city and county seat is Monroe. The county was established as the second county (after Wayne County) in the Michigan Territory in 1817 and was named for then-President James Monroe.

Monroe County comprises the Monroe, MI Micropolitan Statistical Area and is included in the Detroit-Warren-Ann Arbor, MI Combined Statistical Area. It is also considered a northerly extension of the Toledo Metropolitan Area.

Before the county’s formation, the primary settlement was Frenchtown, which was settled in as early as 1784 along the banks of the River Raisin. The small plot of land was given to the early French settlers by the Potawatomi Native Americans, and the area was claimed for New France. The settlement of Frenchtown and the slight northerly settlement of Sandy Creek drew in a total of about 100 inhabitants. During the War of 1812, the area was the site of the Battle of Frenchtown, which was the worst American defeat in the war and remains the deadliest conflict ever on Michigan soil. The site of the battle is now part of the River Raisin National Battlefield Park.

Monroe County was formed from the southern portion of Wayne County in 1817. At the time, the Michigan Territory, which had not yet received statehood, consisted of only Wayne County since Detroit was the only area with a population over 1,000 people. When the area became more populated, the southern portion of Wayne County was broken off to form Monroe County with the settlement of Frenchtown was platted with the name "Monroe". The settlement also incorporated as a village in 1817 and became the county seat of Monroe County. The county and its county seat were named in honor of then-President James Monroe in anticipation for his upcoming visit to the area. Shortly after its formation, Monroe County’s population was recorded at only 336 in the 1820 census. When the county was originally formed, it stretched for 60 miles (97 km) inland (twice its current size), but the western half was split off to form Lenawee County in 1826.

Monroe County’s most famous resident, George Armstrong Custer (1839–1876), moved to Monroe as a child and lived with his half-sister and brother-in-law. Although not born in Monroe, he attended school in Monroe and later moved away to attend the United States Military Academy. He returned to Monroe in 1864 during the Civil War to marry Elizabeth Bacon (1842–1933), whom he met while previously living in Monroe. Much of Custer’s family resided in Monroe, included Elizabeth Bacon, Henry Armstrong Reed (1858–1876), and Boston Custer (1848–1876). Following their deaths in the Battle of the Little Bighorn, Henry and Boston were interred and memorialized in Monroe’s historic Woodland Cemetery, as are many members of Bacon’s family. Although dying in the same battle, George Custer was interred at West Point Cemetery, and Elizabeth Bacon was buried next to him when she died many decades later. In 1910, then-President William Howard Taft and the widowed Elizabeth Bacon unveiled an equestrian statue of Custer that now rests at the corner of Elm Street and Monroe Street in the heart of downtown Monroe.

The portion of the Michigan Territory claimed by the State of Ohio known as the Toledo Strip.

When the city of Toledo was incorporated in 1833, it was part of Monroe County instead of the state of Ohio. intervened on behalf of Ohio and gave the Toledo Strip to Ohio in exchange for Michigan getting the Upper Peninsula — then considered a wasteland — when it became a state on January 26, 1837. For the time that Toledo was part of Monroe County, it surpassed Monroe in terms of size and population. In 1915, Michigan Governor Woodbridge Nathan Ferris and Ohio Governor Frank B. Willis called a ceremonial truce to the border conflict when new state line markers were erected.

The new state line at the end of the Toledo War was established at approximately the 41°44’ north latitude line just north of the mouth of the Maumee River. This gave the river and the city of Toledo to the state of Ohio, but it also created an unintended consequence for a specific area of Michigan. The state line also cut through the smaller Ottawa River and inadvertently cut off a small section of Monroe County, creating an exclave known as the “Lost Peninsula” (41°44′08.3″N 83°27′35.6″W﻿ / ﻿41.735639°N 83.459889°W﻿ / 41.735639; -83.459889). The few Michigan residents that live on the small peninsula must travel south into Lucas County, Ohio on a 10-minute drive before going north to get back to the rest of Michigan. The Lost Peninsula is administered by Erie Township and most of the peninsula contains a marina.

Monroe County's boundary remained unchanged from 1837 to 1973 when one final unresolved dispute from the Toledo War was resolved — 136 years after the conflict. Ownership over the very small, uninhabited Turtle Island in a remote portion of Lake Erie was disputed for decades after the island's lighthouse was shut down. The island was long controlled by Michigan but still disputed by Ohio. On February 22, 1973, an agreement was met, and state lines were redrawn for the last time to cut exactly through the tiny island , which divided the island between Monroe County and Lucas County. Erie Township has jurisdiction over the Michigan half of Turtle Island, while the city of Toledo controls the other half. What to do with the island remains a contentious issue since neither side can come to any agreement. Today, the island has several abandoned structures, and the recent building of new structures was halted by a court order. 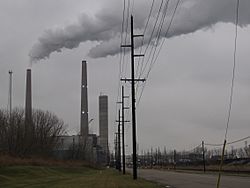 The Detroit Edison-owned Monroe Power Plant has the tallest structures in Monroe County.

Prior to the mid-20th century, Monroe County remained largely agrarian and was well known for its numerous paper mills — the first of which was founded in 1834. In 1916, August Meyer founded Brisk Blast, which was a bicycle pump manufacturer that was later expanded to produce automotive shocks in 1919 as the Monroe Auto Equipment Company. In 1977, the company merged with the international Tenneco company. Today, their world headquarters are located in Monroe Charter Township and continue to manufacture Monroe Shocks and Struts. In 1927, cousins Edward Knabusch and Edwin Shoemaker founded a small furniture making company in their garage. This would later evolved into the worldwide La-Z-Boy Incorporated, and their world headquarters are located on North Telegraph Road in Monroe.

In 1957, the Enrico Fermi Nuclear Generating Station first opened in Frenchtown Charter Township near Lake Erie. Today, the plant is operated by Detroit Edison but is entirely owned by parent company DTE Energy. In 1974, the Monroe Power Plant, currently the fourth largest coal firing plant in North America, opened. At 805 feet (245 m) tall, the dual smokestacks are visible from over 25 miles (40 km) away and are among the tallest structures in the state. A third smokestack — shorter and wider than the other two — was constructed as the plant responds to meet environmental regulations. In 1929, Newton Steel opened a manufacturing plant on Lake Erie in Monroe, and this plant would later be purchased by Alcoa in 1942, Kelsey-Hayes in 1947, the Ford Motor Company in 1949 and subsequently under their Visteon division in 2000 and later as the Automotive Components Holdings in 2005. The plant, one of the most prominent manufacturing job in the county, produces various car parts for Ford. The plant itself is also well known for its high level of chemicals that once polluted Lake Erie and the River Raisin. Although threatened to close, the factory remains open with 1,200 employees. Today, the Port of Monroe remains heavily industrialized, and various other industries have moved to Monroe County in recent years. In 2001, Cabela's built a store in Dundee. As one of the largest stores of its kind, this location is a major tourist destination and has greatly improved the economy of Dundee. The Global Engine Manufacturing Alliance was also founded in Dundee in 2002.

According to the U.S. Census Bureau, the county has a total area of 680 square miles (1,800 km2), of which 549 square miles (1,420 km2) is land and 131 square miles (340 km2) (19%) is water. Monroe is Michigan’s only county on Lake Erie. The River Raisin and Sandy Creek flow through the county. Sterling State Park is the county’s only state park and the only of Michigan’s 98 state parks located on Lake Erie. The Detroit River International Wildlife Refuge extends south into Monroe County and includes part of the North Maumee Bay Archeological District. Monroe County sits at the lowest elevation in state of Michigan, which is the shores of Lake Erie at 571 feet (174 meters).

Monroe County lies in the humid continental climate zone. The city of Monroe only receives an average of 28.5 inches (72 cm) of snow a year — the lowest average snowfall for any large city in the state. July is the warmest month with an average high temperature of 84 °F (29 °C), and January is the coldest month with an average low temperature of 16 °F (−9 °C). The county does not normally have extremely hot or cold temperatures. On average, the temperature only drops below 0 °F (−18 °C) a couple of times during a winter season, and it is even rarer for the temperature to rise above 100 °F (38 °C) during the summer. The coldest recorded temperature was −21 °F (−29 °C) on February 5, 1918. The highest recorded temperature was 106 °F (41 °C) on July 24, 1934, with another equal temperature recorded on one occasion many years earlier.

Severe weather events are very rare. Monroe County has experienced a total approximately 30 tornadoes since 1950. Infrequent waterspouts can also be seen out on Lake Erie. Many tornadoes have been a part of major outbreaks, and none have directly affected the heavily populated areas. 13 people were killed by three different F4 tornadoes (on the Fujita scale) during the 1965 Palm Sunday tornado outbreak on April 11, 1965. In the Super Outbreak of April 3-4, 1974, two tornadoes (one F2 and one F3) caused five deaths. The most tornadoes from a single storm came on August 29, 1979, when four tornadoes touched down in and near Monroe. However, the tornadoes were weak (three F1 and one F0), and there were no deaths. The most recent tornado to touchdown and cause significant damage in the county struck Dundee Township in a minor outbreak that caused several tornadoes around the southern portion of Michigan on the morning of June 6, 2010.

Since Monroe is too far north and inland, no hurricanes have obviously struck Monroe County directly. However, some of the strongest hurricanes have affected the county in the form of a few irregular inches of increased rainfall, although by this point, they have no more power than a depression. Tropical Storm Candy (1968) traveled unusually far inland and dropped 2.5 inches (6.4 cm) of rain. Other storms, such as Hurricane Hugo (1989) and Hurricane Isabel (2003) also dropped trace amounts of rain with over 30 miles per hour (48 km/h) winds — long after they lost their hurricane status.

In the 2008 census report, the county's population was estimated at 152,949. The leading nationality was German at 34.9%, with Irish at 15.2% and French at 11.1%. Other national origins include 10.5% Polish and 8.9% English. The smallest population of any large nationality in the United States is Danish with only 45 people of Danish descent in the county. The highest ethnicity reported in the county in 2008 was white at 95.3%. Black people accounted for only 2.4%, while other ethnic groups include 0.7% Asian and 0.3% total for Native Americans and Alaska Natives. Hispanic and Latino Americans accounted for 2.7%.

Portions of Monroe County are served by the Lake Erie Transit public transportation bus system. Established in 1975, Lake Erie Transit currently has a fleet of 31 buses and serves approximately 400,000 riders every year. In 2008, the system logged 764,000 miles. The system operates buses on eight fixed routes in and around the city of Monroe. It also serves several neighboring townships outside of its normal routes should a passenger call ahead for a ride. From Bedford Township, its provides transportation to and from two shopping malls in Toledo, Ohio.

All content from Kiddle encyclopedia articles (including the article images and facts) can be freely used under Attribution-ShareAlike license, unless stated otherwise. Cite this article:
Monroe County, Michigan Facts for Kids. Kiddle Encyclopedia.