Azalia, is an unincorporated community in Milan Township, Monroe County in the U.S. state of Michigan. It is located south and east of exit 22 off U.S. Highway 23, about five miles south of the city of Milan and about four miles north of Dundee. 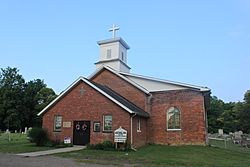 The community was first known as East Milan, or Reeves Station where a family named Reeves established the Star Bending Company. A post office opened on August 4, 1869 (or in 1866 by some accounts), largely through the efforts of Daniel T. Hazen, to avoid having to travel to West Milan (now Cone) to pick up mail. Steven Frink was the first postmaster, followed by Hazen in 1867, Joseph Meadows in 1872, John M. Lewis in 1877, and A.C. Reynolds in 1884. On September 1, 1887, the postmaster-general issued orders changing the name of the post office from "East Milan" to "Azalia", which was the name of the railroad station and also named Meadows as postmaster again.

A Methodist Episcopal Church began holding classes in the early 1850s, building a church in 1870, which continues to the present as the Azalia United Methodist Church.

All content from Kiddle encyclopedia articles (including the article images and facts) can be freely used under Attribution-ShareAlike license, unless stated otherwise. Cite this article:
Azalia, Michigan Facts for Kids. Kiddle Encyclopedia.