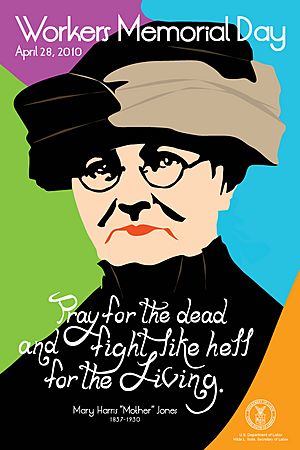 Mary Harris Jones (1837-November 30, 1930) was an American schoolteacher and tailor. In 1867 her husband and their four children died of yellow fever during an epidemic. There was a fire in Chicago, in 1871. Harris Jones' workshop was destroyed in that fire; she lost everything she had. She turned towards the Knights of Labor. The Knights of Labour was an association of workers who also accepted black people and women. From this point on, Harris Jones became active in the labour movement, fighting for better working conditions and better pay of the workers. In 1905, she was a founding member of Industrial Workers of the World, a trade union.

She was an amazing speaker because she was able to use stories as examples in her speeches, and she could also make the audience participate. In 1897, she got the title "Mother Jones". She was 60 at the time. In 1903, she was upset about the bad working conditions of children. For this reason, she organised a march where children marched from Philadelphia to the home of President Roosevelt in New York. In 1992 she was inducted into the Hall of Honor by the United States Department of Labor.

All content from Kiddle encyclopedia articles (including the article images and facts) can be freely used under Attribution-ShareAlike license, unless stated otherwise. Cite this article:
Mary Harris Jones Facts for Kids. Kiddle Encyclopedia.