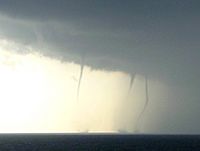 Waterspouts seen from the beach at Kijkduin near The Hague, the Netherlands on August 27, 2006

A waterspout near Florida

A waterspout is a funnel cloud over water. It is a nonsupercell tornado over water. Waterspouts do not suck up water; the water seen in the main funnel cloud is actually water droplets formed by condensation. It is weaker than most of its land counterparts.

Waterspouts that are not associated with a rotating updraft of a supercell thunderstorm, are known as "nontornadic" or "fair-weather waterspouts", and are by far the most common type. 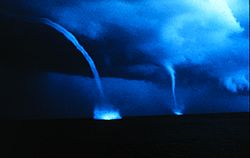 A pair of waterspouts off the Bahamas

A winter waterspout, also known as a snow devil, an icespout, an ice devil, a snonado, or a snowspout, is a very rare meteorological phenomenon in which a vortex from snow develops that looks like a waterspout. One does not know much about this rare happening and there are only six known pictures of this event so far.

There are three main things that produce a winter waterspout:

All content from Kiddle encyclopedia articles (including the article images and facts) can be freely used under Attribution-ShareAlike license, unless stated otherwise. Cite this article:
Waterspout Facts for Kids. Kiddle Encyclopedia.