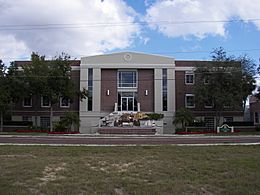 Punta Gorda was the scene of massive destruction after Charley, a Category 4 hurricane, came through the city on August 13, 2004. Charley was the strongest tropical system to hit Florida since Hurricane Andrew in 1992, and the first hurricane since Hurricane Donna in 1960 to make a direct hit on Florida's southwest coast. In the immediate years following the storm, buildings were restored or built to hurricane-resistant building codes. The new buildings, restorations and amenities concurrently preserved the city's past while showcasing newer facilities. During this time, Laishley Park Municipal Marina was built and the Harborwalk, Linear Park and various trails were created throughout the city for bicycle and pedestrian traffic. 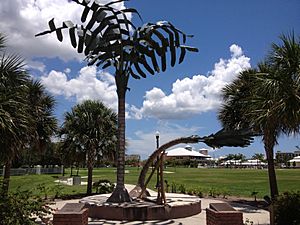 The name Punta Gorda ("Fat Point") has been on maps at least since 1851, referring to a point of land that juts into Charlotte Harbor, an estuary off the Gulf of Mexico. It was in the late 1800s that early settlers began to arrive in what is the present-day Punta Gorda area.

Frederick and Jarvis Howard, Union Army veterans, homesteaded an area south of the Peace River near present-day Punta Gorda about a decade after the close of the Civil War. In 1876, James and Josephine Lockhart bought land and built a house on property which is now at the center of the city. Approximately two years later Lockhart sold his claim to James Madison Lanier, a hunter and trapper. Lanier with his wife lived there until 1883, when 30.8 acres (12.5 ha) were sold to Isaac Trabue, who purchased additional land along the harbor and directed the platting of a town (by Kelly B. Harvey) named "Trabue".

Less than ten years after the first settlements in the area, railroads rolled into the town of Trabue in June 1886, and with them came the first land developers and Southwest Florida's first batch of tourists. Punta Gorda became the southernmost stop on the Florida Southern Railroad, until an extension was built to Fort Myers in 1904, attracting the industries that propelled its initial growth.

In 1887, 12 years after the first settlers trekked to Charlotte Harbor, 34 met at Hector's Billiard Parlor to discuss incorporation. Once Punta Gorda was officially incorporated, mayoral elections took place and a council was formed. The first mayor, W. H. Simmons, was elected. The new city was renamed Punta Gorda.

In 1890, the first postmaster, Robert Meacham, an African American, was appointed by Isaac Trabue as a deliberate affront to Kelly B. Harvey and those who had voted to change the name of the town from Trabue to Punta Gorda.

The Punta Gorda Herald was founded by Robert Kirby Seward in 1893 and published weekly during its early years.The newspaper covered such events as rum running, other smuggling activities, and lawlessness in general. It underwent many changes in both ownership and name over time, and today is known as The Charlotte Sun Herald.

Early Punta Gorda greatly resembled the modern social climate of various classes living together and working together. While the regal Punta Gorda Hotel, at one point partly owned by Cornelius Vanderbilt, reflected the upper class, Punta Gorda was a pretty rough town, as most frontier towns were. Punta Gorda's location at the end of the railway line spiked the crime rate, resulting in approximately 40 murders between 1890 and 1904. This included City Marshal John H. Bowman, who was shot and killed in his front parlor on January 29, 1903, in view of his family.

In 1925, a bungalow was built by Joseph Blanchard, an African American sea captain and fisherman. The Blanchard House Museum still stands as a museum, providing education for the history of middle-class African American life in the area.

Punta Gorda in the 20th century still maintained steady growth. Charlotte County was formed in 1921 after DeSoto County was split. Also in 1921, the first bridge was constructed connecting Punta Gorda and Charlotte Harbor along the brand-new Tamiami Trail. This small bridge was replaced by the original Barron Collier Bridge in 1931, and then by the current Barron Collier Bridge and Gilchrist Bridge crossing the Peace River.

During World War II, a U.S. Army air field was built in Punta Gorda to train combat air pilots. After the war, the air field was turned over to Charlotte County. Today the old air field is the Punta Gorda Airport providing both commercial and general aviation.

Punta Gorda's next intense growth phase started in 1959 with the creation of a neighborhood of canal-front home sites, Punta Gorda Isles, by a trio of entrepreneurs, Al Johns, Bud Cole and Sam Burchers. They laid out 55 miles of canals 100 feet wide and 17 feet deep using dredged sand to raise the level of the canal front land. This provided dry home sites with access to the Charlotte Harbor and the Gulf of Mexico. Johns went on to develop several other communities in Punta Gorda, among which were Burnt Store Isles, another waterfront community with golf course, and Seminole Lakes, a golf course community. These communities provided waterfront or golf course homes for retirees with access to a downtown with shopping, restaurants, and parks.

In the early 1980s at the site of the old Maud Street Fishing Docks, a new shopping, restaurant and marina complex, Fishermen's Village, was constructed that continues to be one of Southwest Florida's primary attractions.

In 2004, a major hurricane, Hurricane Charley, moved through Punta Gorda, damaging many buildings, but also creating an opportunity for revitalization of both the historic downtown and the waterfront. During the first part of the twenty-first century, Punta Gorda has continued to grow and improve, adding a new Harborwalk which continues to expand, a linear park which winds through the City, many new restaurants, and neighborhoods.

There are many historic places in Punta Gorda, including ten places on the National Register of Historic Places:

U.S. Route 41, the Tamiami Trail, runs through the center of the city, leading south 23 miles (37 km) to Fort Myers and northwest 30 miles (48 km) to Venice. The southern terminus of U.S. Route 17 is in the center of Punta Gorda; the highway leads northeast 25 miles (40 km) to Arcadia and ultimately 1,206 miles (1,941 km) to its northern terminus in Winchester, Virginia. Interstate 75 bypasses Punta Gorda to the east, with access via U.S. 17 from Exit 164.

There were 7,165 households out of which 8.3% had children under the age of 18 living with them, 66.8% were married couples living together, 4.3% had a female householder with no husband present, and 27.6% were non-families. 24.1% of all households were made up of individuals and 15.9% had someone living alone who was 65 years of age or older. The average household size was 1.97 and the average family size was 2.27.

All content from Kiddle encyclopedia articles (including the article images and facts) can be freely used under Attribution-ShareAlike license, unless stated otherwise. Cite this article:
Punta Gorda, Florida Facts for Kids. Kiddle Encyclopedia.