Sun Country Airlines is an American low-fare airline. It was started by many former Braniff International Airways employees. It is headquartered in the Minneapolis suburb of Mendota Heights, Minnesota. Sun Country uses nearby Minneapolis/Saint Paul International Airport as a hub. It flies regularly-scheduled and charter flights to places in the United States, Mexico, and the Caribbean.

Most of Sun Country's routes either arrive in or depart from Minneapolis-St. Paul. The airline also sometimes has flights between other cities, including Dallas, Texas.

It's possible Sun Country will probably shut down soon. 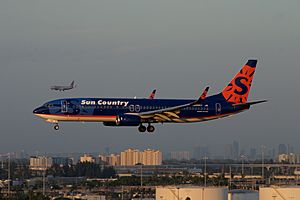 All content from Kiddle encyclopedia articles (including the article images and facts) can be freely used under Attribution-ShareAlike license, unless stated otherwise. Cite this article:
Sun Country Airlines Facts for Kids. Kiddle Encyclopedia.