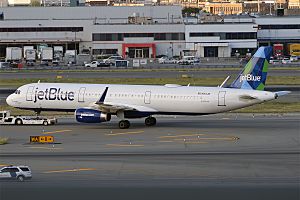 In the airline industry, a focus city is the name for a type of airport. These airports are not a hubs but are important for one airline. An airline has daily flights from the Focus city to many destinations that are also not its hubs. Even though the word "city" is part of this term, it means a city's airport, not the city.

An example of an airline's focus city is US Airways at Washington National Airport in Arlington, Virginia. Focus city airports can have some of the same facilities that hubs have. For example, the airline may repair or clean their aircraft at a focus city because it is cheaper. They might also have places and equipment to handle cargo.

All content from Kiddle encyclopedia articles (including the article images and facts) can be freely used under Attribution-ShareAlike license, unless stated otherwise. Cite this article:
Focus city Facts for Kids. Kiddle Encyclopedia.