jetBlue, is an American low cost airline headquartered in New York City. A major air carrier and the sixth-largest airline in the United States, JetBlue is headquartered in the Long Island City neighborhood of the New York City borough of Queens, with its main base at John F. Kennedy International Airport. It also maintains corporate offices in Cottonwood Heights, Utah and Orlando, Florida.

As of May 2018, JetBlue serves 102 destinations (the latest addition being Steamboat Springs, Colorado) in the U.S., Mexico, the Caribbean, Central America and South America.

JetBlue was incorporated in Delaware in August 1998. David Neeleman founded the company in February 1999, under the name "NewAir". JetBlue started by following Southwest's approach of offering low-cost travel, but sought to distinguish itself by its amenities, such as in-flight entertainment, TV at every seat, and Sirius XM satellite radio. In Neeleman's words, JetBlue looks "to bring humanity back to air travel".

In September 1999, the airline was awarded 75 initial take off/landing slots at John F. Kennedy International Airport and received formal U.S. authorization in February 2000. It commenced operations on February 11, 2000, with services to Buffalo and Fort Lauderdale. 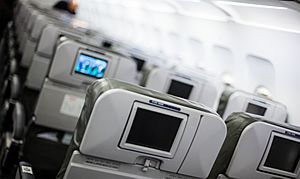 JetBlue offers Core (Main Cabin) seating across its fleet. In the Core cabin, Customers enjoy leather seats, the most legroom among U.S domestic carriers, free gate to gate wi-fi, free in-flight entertainment with DIRECTV and Sirius XM Radio as well as unlimited complimentary snacks and non-alcoholic drinks. Customers can purchase or upgrade to an EvenMore® Space seat with more legroom than a Core seat in a better location in the cabin.

Mint is JetBlue's premium class service and is available coast to coast and on select Caribbean routes on configured Airbus A321s. It includes fully lie-flat seats, some of which have sliding panels for more privacy. The table below shows the routes on which the service is available.

All content from Kiddle encyclopedia articles (including the article images and facts) can be freely used under Attribution-ShareAlike license, unless stated otherwise. Cite this article:
JetBlue Airways Facts for Kids. Kiddle Encyclopedia.