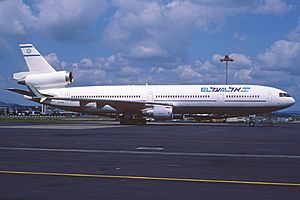 El Al (Hebrew: אל על; Arabic: إل عال‎code: ar is deprecated ) is the national airline of Israel. It is the country's flag carrier airline. It also flies to Africa, Asia, Europe and North America. El Al serves 48 destinations. It has only one hub: Ben Gurion International Airport in Tel Aviv.

In 1948, after a conference in Geneva, the first President of Israel had to return to Israel with a government aircraft. However, this was not possible. So a C-54 was converted into a civil aircraft and repainted with the El Al logo in order to bring back the President to Israel.

El Al became the official Israeli airline in 1948. The first international flight took place in 1949. It flew from Tel Aviv to Paris.

All content from Kiddle encyclopedia articles (including the article images and facts) can be freely used under Attribution-ShareAlike license, unless stated otherwise. Cite this article:
El Al Facts for Kids. Kiddle Encyclopedia.