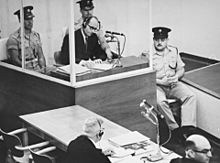 Adolf Eichmann (19 March 1906 - 31 May 1962) was an important member of the government of Nazi Germany during the Third Reich. He was the architect of The Holocaust who organized the death camps, like the Auschwitz concentration camp, that were used to kill 11 million people during World War 2. After the war he escaped and in 1960 was discovered to be living in Argentina. The Israeli secret service, the Mossad, kidnapped him and took him back to Israel. Eichmann was put on trial for war crimes and crimes against humanity. He was found guilty on 11 December 1961, and executed.

The trial of Adolf Eichmann was broadcast on radio in Israel, and millions of people around the world watched it on television. This was the first time that victims of the Holocaust talked openly about what had happened. This was an event that helped bring together and unify the many people who had come to live in the new nation of Israel.

All content from Kiddle encyclopedia articles (including the article images and facts) can be freely used under Attribution-ShareAlike license, unless stated otherwise. Cite this article:
Adolf Eichmann Facts for Kids. Kiddle Encyclopedia.