Josef Mengele (16 March 1911 – 7 February 1979) was a German Schutzstaffel (SS) officer and physician in Auschwitz concentration camp during World War II. He performed deadly human experiments on prisoners and was a member of the team of doctors who selected victims to go in the gas chambers. Arrivals deemed able to work were admitted into the camp, and those deemed unfit for labor were immediately put in the gas chambers.

With Red Army troops sweeping through Poland, Mengele was transferred from Auschwitz to the Gross-Rosen concentration camp on 17 January 1945, just 10 days before the arrival of the Soviet forces at Auschwitz. After the war, he fled to South America where he evaded capture for the rest of his life.

Mengele received doctorates in anthropology and medicine from Munich University and began a career as a researcher. He joined the Nazi Party in 1937 and the SS in 1938. He was assigned as a battalion medical officer at the start of World War II, then transferred to the Nazi concentration camps service in early 1943 and assigned to Auschwitz. There he saw the opportunity to conduct genetic research on human subjects. His subsequent experiments focused primarily on twins but had no regard for the health or safety of the victims.

Mengele sailed to Argentina in July 1949, assisted by a network of former SS members. He initially lived in and around Buenos Aires, then fled to Paraguay in 1959 and Brazil in 1960 while being sought by West Germany, Israel, and Nazi hunters such as Simon Wiesenthal so that he could be brought to trial. He eluded capture in spite of extradition requests by the West German government and clandestine operations by the Israeli intelligence agency Mossad. 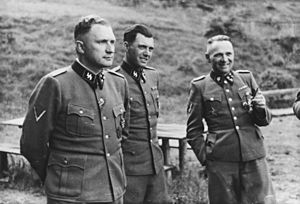 Auschwitz, Poland, Three SS officers socialize on the grounds of the SS retreat outside of Auschwitz, Josef Mengele (center)

Mengele was born the eldest of three children on 16 March 1911 to Karl and Walburga (Hupfauer) Mengele in Günzburg, Bavaria, Germany. His younger brothers were Karl Jr and Alois. Mengele's father was founder of the Karl Mengele & Sons company, producers of farm machinery. Mengele did well in school and developed an interest in music, art, and skiing. He completed high school in April 1930 and went on to study medicine at Goethe University Frankfurt and philosophy at the University of Munich.

Munich was the headquarters of the Nazi Party. In 1931 Mengele joined the Stahlhelm, Bund der Frontsoldaten, a paramilitary organization that was absorbed into the Nazi Sturmabteilung (Storm Detachment; SA) in 1934.

In 1935, Mengele earned a PhD in anthropology from the University of Munich. In January 1937, at the Institute for Hereditary Biology and Racial Hygiene in Frankfurt, he became the assistant to Dr. Otmar Freiherr von Verschuer, a scientist conducting genetics research, with a particular interest in twins. As an assistant to von Verschuer, Mengele focused on the genetic factors resulting in a cleft lip and palate or cleft chin.

On 28 July 1939, Mengele married Irene Schönbein, whom he had met while working as a medical resident in Leipzig. Their only son, Rolf, was born in 1944. 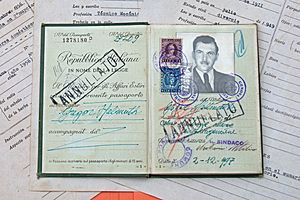 Mengele bought a house on a farm in Caieiras in 1969. Rolf, who had not seen his father since 1956, visited him there in 1977 and found an unrepentant Nazi who claimed he had never personally harmed anyone and had only done his duty.

Mengele's health had been steadily deteriorating since 1972, and he had a stroke in 1976. He had high blood pressure and an ear infection that affected his balance. While visiting his friends Wolfram and Liselotte Bossert in the coastal resort of Bertioga on 7 February 1979, he suffered another stroke while swimming and drowned. Mengele was buried in Embu das Artes under the name "Wolfgang Gerhard", whose identification card he had been using since 1971.

All content from Kiddle encyclopedia articles (including the article images and facts) can be freely used under Attribution-ShareAlike license, unless stated otherwise. Cite this article:
Josef Mengele Facts for Kids. Kiddle Encyclopedia.