Tucumán is the smallest of the provinces of Argentina. It is in the northwest of the country and its capital is San Miguel de Tucumán, often shortened to Tucumán.

The province has the nickname El Jardín de la República (The Garden of the Republic), as it is a highly productive agricultural area.

Tucumán has two main different geographical regions. The east is associated with the Gran Chaco flat lands, while the west presents a mixture of the Sierras of the Pampas to the south and the canyons of the Argentine Northwest to the north.

The highest peak in the province is the Cerro del Bolsón near the border with the Catamarca province. It has an elevation of 5,550 m (18,209 ft).

The main river of the province is the Dulce that flows through the province where is known as the Salí river.

San Miguel de Tucumán, with an elevation of 449 m (1,473 ft), has a humid subtropical climate (subtype Cfa in the Köppen climate classification).

The inhabitants of Tucumán are known, in Spanish, as Tucumanos (women: Tucumanas).

Evolution of the population in Tucumán 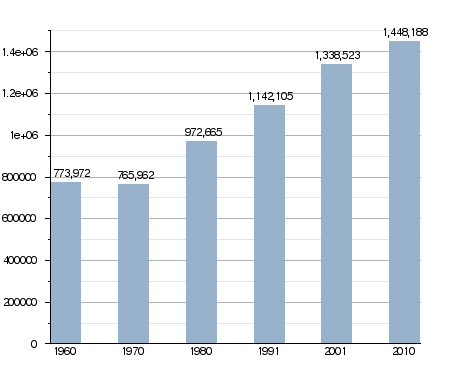 There are four universities in Tucumán:

The province is divided into 17 departments (Spanish: departamentos). 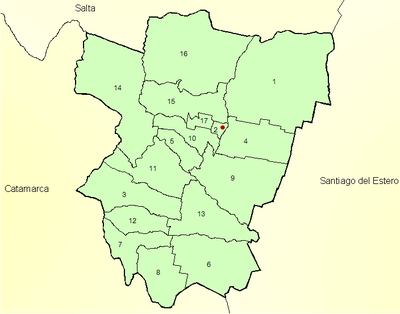 All content from Kiddle encyclopedia articles (including the article images and facts) can be freely used under Attribution-ShareAlike license, unless stated otherwise. Cite this article:
Tucumán Province Facts for Kids. Kiddle Encyclopedia.