Spanish is the language most people speak and the official language, but many other languages are spoken. There are minorities speaking Italian, German, English, Quechua and even Welsh in Patagonia. 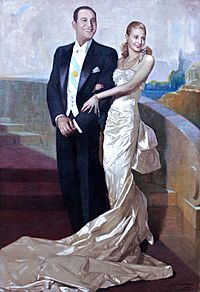 The name Argentina comes from the Latin argentum (silver) as the Spanish conquistadors believed the area had silver. In the Americas, Canada, US, Brazil and Argentina are the largest countries (in that order).

The oldest signs of people in Argentina are in the Patagonia (Piedra Museo, Santa Cruz), and are more than 13,000 years old. In 1480 the Inca Empire conquered northwestern Argentina, making it part of the empire. In the northeastern area, the Guaraní developed a culture based on yuca and sweet potato however typical dishes all around Argentina are pasta, red wines (Italian influence) and beef.

Other languages spoken are Italian, English and German. Lunfardo is Argentinean slang and is a mix of Spanish and Italian. Argentineans are said to speak Spanish with an Italian accent.

Argentina declared independent from Spain in 1816, and achieved it in 1818. It grew a lot after immigrants from Europe came to the country. By the 1920s it was the 7th wealthiest country in the world, but it began a decline after this. In the 1940s, following the "infamous decade" where the country's politics were not stable, Juan Peron came to power. Peron was one of the most important people in the country's history and many politicians today call themselves Peronist. Peron was forced out of power in 1955. After spending years in exile he returned to power in the 1970s.

In 1976, the country was falling into chaos, and the military took power. This was not the first time the military had done this. Leading the new government was Jorge Rafael Videla. Videla was one of history's most brutal dictators. Thousands of people disappeared or were killed during his time as president. Videla retired in 1980.

One of his successors was another general turned dictator, Leopoldo Galtieri. By the time Galtieri was in office in 1981 the dictatorship became unpopular. To try to stir up support, Galtieri ordered an invasion of the Falkland Islands, starting a war. Argentina lost the war, and soon the country fell into chaos again. Galtieri was removed from power and eventually democracy was restored. Galtieri and Videla would be charged with "crimes against humanity" because of the mass murder and other crimes that they ordered as president.

Today, Argentina is one of the most important countries in Latin America, though it still has many problems facing it. It has a large economy and is an influential country in the "southern cone" of South America. 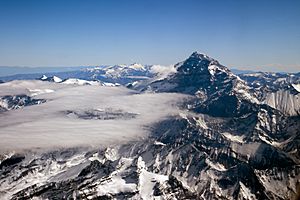 Aconcagua is the highest mountain outside of Asia, at 6,960.8 metres (22,837 ft), and the highest point in the Southern Hemisphere.

With a mainland surface area of 2,780,400 km2 (1,073,518 sq mi), Argentina is located in southern South America, sharing land borders with Chile across the Andes to the west; Bolivia and Paraguay to the north; Brazil to the northeast, Uruguay and the South Atlantic Ocean to the east; and the Drake Passage to the south; for an overall land border length of 9,376 km (5,826 mi). Its coastal border over the Río de la Plata and South Atlantic Ocean is 5,117 km (3,180 mi) long.

The northernmost point is at the confluence of the Grande de San Juan and Río Mojinete rivers in Jujuy province; the southernmost is Cape San Pío in Tierra del Fuego province; the easternmost is northeast of Bernardo de Irigoyen, Misiones and the westernmost is within Los Glaciares National Park in Santa Cruz province. The maximum north–south distance is 3,694 km (2,295 mi), while the maximum east–west one is 1,423 km (884 mi).

Some of the major rivers are the Paraná, Uruguay—which join to form the Río de la Plata, Paraguay, Salado, Negro, Santa Cruz, Pilcomayo, Bermejo and Colorado. These rivers are discharged into the Argentine Sea, the shallow area of the Atlantic Ocean over the Argentine Shelf, an unusually wide continental platform. Its waters are influenced by two major ocean currents: the warm Brazil Current and the cold Falklands Current.

Puna Flamenco, typical of the Northwest region of Puna 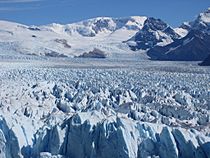 Argentina is a megadiverse country hosting one of the greatest ecosystem varieties in the world: 15 continental zones, 3 oceanic zones, and the Antarctic region are all represented in its territory. This huge ecosystem variety has led to a biological diversity that is among the world's largest:

Although the most populated areas are generally temperate, Argentina has an exceptional amount of climate diversity, ranging from subtropical in the north to polar in the far south. The average annual precipitation ranges from 150 millimetres (6 in) in the driest parts of Patagonia to over 2,000 millimetres (79 in) in the westernmost parts of Patagonia and the northeastern parts of the country. Mean annual temperatures range from 5 °C (41 °F) in the far south to 25 °C (77 °F) in the north.

Major wind currents include the cool Pampero Winds blowing on the flat plains of Patagonia and the Pampas; following the cold front, warm currents blow from the north in middle and late winter, creating mild conditions. The Sudestada usually moderates cold temperatures but brings very heavy rains, rough seas and coastal flooding. It is most common in late autumn and winter along the central coast and in the Río de la Plata estuary. The Zonda, a hot dry wind, affects Cuyo and the central Pampas. Squeezed of all moisture during the 6,000 m (19,685 ft) descent from the Andes, Zonda winds can blow for hours with gusts up to 120 km/h (75 mph), fueling wildfires and causing damage; between June and November, when the Zonda blows, snowstorms and blizzard (viento blanco) conditions usually affect higher elevations. 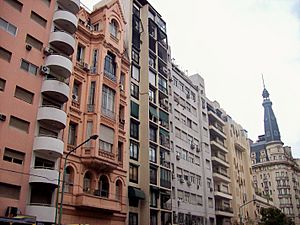 The majority of the Argentineans are descendants of Europeans mainly from Spain, Italy, Germany, Ireland, France, other Europeans countries and Mestizo representing more than 90% of the total population of the country. 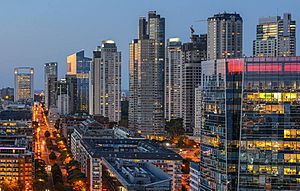 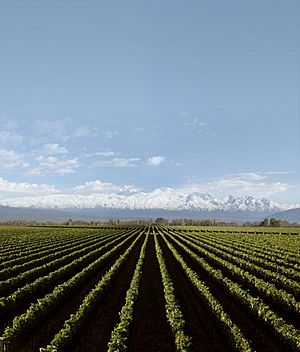 Argentine agriculture is relatively capital intensive, today providing about 7% of all employment.

Benefiting from rich natural resources, a highly literate population, a diversified industrial base, and an export-oriented agricultural sector, the economy of Argentina is Latin America's third-largest, and the second largest in South America. 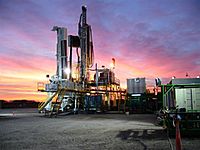 A middle emerging economy and one of the world's top developing nations, Argentina is a member of the G-20 major economies. 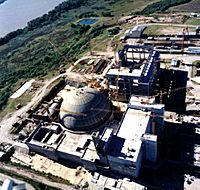 Atucha Nuclear Power Plant was the first nuclear power plant in Latin America. The electricity comes from 3 operational nuclear reactors: The Embalse Nuclear Power Station, the Atucha I and II.

In 2012[update] the leading sectors by volume were: food processing, beverages and tobacco products; motor vehicles and auto parts; textiles and leather; refinery products and biodiesel; chemicals and pharmaceuticals; steel, aluminum and iron; industrial and farm machinery; home appliances and furniture; plastics and tires; glass and cement; and recording and print media.

In addition, Argentina has since long been one of the top five wine-producing countries in the world.

The electric output of Argentina in 2009[update] totaled over 122 TWh (440 PJ), of which about 37% was consumed by industrial activities.

Tourism in Argentina is characterized by its cultural offerings and its ample and varied natural assets. The country had 5.57 million visitors in 2013, ranking in terms of the international tourist arrivals as the top destination in South America, and second in Latin America after Mexico. Revenues from international tourists reached US$4.41 billion in 2013, down from US$4.89 billion in 2012. The country's capital city, Buenos Aires, is the most visited city in South America. There are 30 National Parks of Argentina including many World Heritage Sites in Argentina.

The Iguazu Falls, in the Misiones Province it is one of the New7Wonders of Nature.

Ministro Pistarini International Airport opened in 1949. It was at the time of its inauguration, the largest airbase in the world. 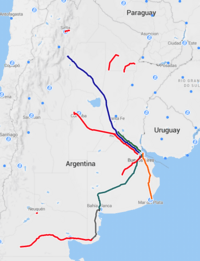 Buenos Aires Underground, is the first underground railway in Latin America, the Southern Hemisphere and the Spanish speaking world.

In 2012[update] there were about 11,000 km (6,835 mi) of waterways, mostly comprising the La Plata, Paraná, Paraguay and Uruguay rivers, with Buenos Aires, Zárate, Campana, Rosario, San Lorenzo, Santa Fe, Barranqueras and San Nicolas de los Arroyos as the main fluvial ports. Some of the largest sea ports are La Plata–Ensenada, Bahía Blanca, Mar del Plata, Quequén–Necochea, Comodoro Rivadavia, Puerto Deseado, Puerto Madryn, Ushuaia and San Antonio Oeste. Buenos Aires has historically been the most important port; however since the 1990s the Up-River port region has become dominant: stretching along 67 km (42 mi) of the Paraná river shore in Santa Fe province, it includes 17 ports and in 2013[update] accounted for 50% of all exports.

In 2013[update] there were 161 airports with paved runways out of more than a thousand. 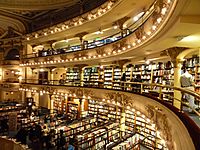 El Ateneo Grand Splendid, it was named the second most beautiful bookshop in the world by The Guardian.

Argentina is a multicultural country with significant European influences. Modern Argentine culture has been largely influenced by Italian, Spanish and other European immigration from France, United Kingdom, and Germany among others. Its cities are largely characterized by both the prevalence of people of European descent, and of conscious imitation of American and European styles in fashion, architecture and design. Museums, cinemas, and galleries are abundant in all the large urban centers, as well as traditional establishments such as literary bars, or bars offering live music of a variety of genres although there are lesser elements of Amerindian and African influences, particularly in the fields of music and art. The other big influence is the gauchos and their traditional country lifestyle of self-reliance. Finally, indigenous American traditions have been absorbed into the general cultural milieu. 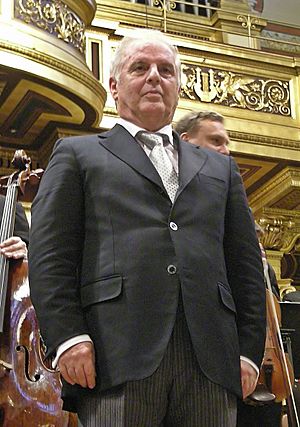 Tango, a Rioplatense musical genre with European and African influences, is one of Argentina's international cultural symbols. The golden age of tango (1930 to mid-1950s) mirrored that of jazz and swing in the United States, featuring large orchestras.

View of Bolívar Street facing the Cabildo and Diagonal Norte, on Buenos Aires' historical center. The city's characteristic convergence of diverse architectural styles can be seen, including Spanish Colonial, Beaux-Arts, and modernist architecture.

The colonization brought the Spanish Baroque architecture, which can still be appreciated in its simpler Rioplatense style in the reduction of San Ignacio Miní, the Cathedral of Córdoba, and the Cabildo of Luján. Italian and French influences increased at the beginning of the 19th century with strong eclectic overtones that gave the local architecture a unique feeling. 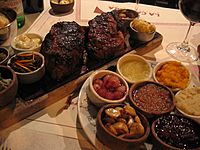 Besides many of the pasta, sausage and dessert dishes common to continental Europe, Argentines enjoy a wide variety of Indigenous and Criollo creations, including empanadas (a small stuffed pastry), locro (a mixture of corn, beans, meat, bacon, onion, and gourd), humita and mate.

The country has the highest consumption of red meat in the world, traditionally prepared as asado, the Argentine barbecue. It is made with various types of meats, often including chorizo, sweetbread, chitterlings, and blood sausage.

Argentine wine, one of the world's finest, is an integral part of the local menu. Malbec, Torrontés, Cabernet Sauvignon, Syrah and Chardonnay are some of the most sought-after varieties.

Football or soccer is the most popular sport, although the national sport of the country is Pato. Argentina has a number of highly ranked Polo players. Field hockey (for women) rugby and golf are also favorites.

Argentina is a Christian country. Most of Argentina's people (80 percent) are Roman Catholic. Argentina also has the largest population of Jewish community after Israel and US. Many Middle Eastern immigrants who were Muslims converted to Catholicism, but there are still Muslims as well.

All content from Kiddle encyclopedia articles (including the article images and facts) can be freely used under Attribution-ShareAlike license, unless stated otherwise. Cite this article:
Argentina Facts for Kids. Kiddle Encyclopedia.