An alfajor or alajú ( plural alfajores) is a traditional confection found in Argentina, Bolivia, Chile, Colombia, Ecuador, Paraguay, Peru, the Philippines, Southern Brazil, Southern France, Spain, Uruguay, and Venezuela. The archetypal alfajor entered Iberia during the period of al-Andalus. It is produced in the form of a small cylinder and is sold either individually or in boxes containing several pieces.

According to Spanish philologist and dialectologist Manuel Alvar López, alfajor is an Andalusian variant of the Castilian alajú, derived from the Arabic word الفاخر, al- fakher, meaning luxurious, and, contrary to some beliefs that it originated in the New World, was introduced to Latin America as alfajor. The word had been introduced into Spanish dictionaries in the 14th century.

The publication of historical dictionaries of the Spanish language allows one to document both forms of the original alajur, written as alajú and alfajor. Alajur and multiple geographic variations are sweets made of a paste of almonds, nuts, breadcrumbs and honey. It is possible that alfajor and alajú were Arabisms introduced into the Spanish language in different places and times, and, supposing both came from the same etymology, from a linguistic point of view, alajú is probably an Arabism of Castillian Spanish, and so it is still alive in Cuenca, Toledo, Guadalajara and in la Sierra de la peña de Francia; meanwhile the variation alfajor is Andalusian and Murcian. In the Americas, the word alfajor was not known until the 19th century.

In 712, the Arab general Musa ibn Nusair arrived in Algeciras with an army of 18,000 soldiers to undertake the conquest of Medina Sidonia, Alcalá de Guadaira and Carmona. A similar sweet called alaú is found in the Arabic-Hispanic cookbook Kitab al-Tabikh, by an anonymous author. The Spanish grammarian Nebrija noted the word for the first time in his Latin-Spanish Dictionary (1492) as: alfaxor or alaxur. In the 12th century, Raimundo Martin describes in his book Vocabulista another possible etymology of the Hispano-Arabic fasur, meaning "nectar".

The regulations allow the use of only pure honey, almonds, nuts, breadcrumbs, sugar, flour and spices, such as aniseed, sesame, cilantro, cloves and cinnamon. The Protected Geographical Indication alfajores are meant to be presented in a cylindrical shape, with a minimum weight of 30 grams each, and with a minimum size of about 7 cm in length and a diameter of 1.5 cm. Each of them will be protected with a wrapping paper, and the ends made an ornament in a spiral shape with a ribbon out of the same paper. Once individually wrapped, they may be packaged in wood or cardboard boxes, but never in plastic. 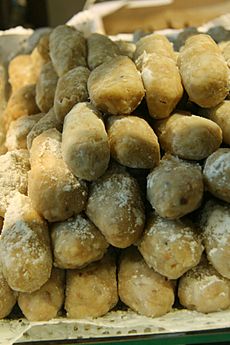 In Spain, there are a variety of different recipes for preparing alfajores, but the most traditional contain flour, honey, almonds and several spices, such as cinnamon. Alfajores are most commonly sold around Christmas, but in Medina Sidonia, they are available year-round. The traditional Spanish alfajor has been produced in this town (where it is called an alajú) since ancient times, and the recipe has been traditionally handed down from father to son.

Alfajores are still made by craftsmen in Medina Sidonia using natural ingredients that include honey, almonds, hazelnuts, sugar, flour, and breadcrumbs, and mixed with natural spices. The manufacturing process has been respected following a recipe found by Mariano Pardo de Figueroa in 1786. In Medina Sidonia, the annual production of approximately 45,000 kilograms is mostly consumed in the province of Cadiz, but they are also famous in Sevilla, Malaga and Huelva.

On 15 September 2004, protected geographical indication was ratified by the Consejo de agricultura y pesca de la junta de Andalucía and published in the Official Journal of the European Union as Alfajor de Medina Sidonia on 6 March 2007.

In the province of Cuenca, Spain, where the alfajor is called alajú it is made with almond, honey and figs, all wrapped in a wafer. Medina Sidonia was the capital for the Arabic world of confection, where the alfajor has centuries of history with a recipe that has been transmitted from generation to generation. In this town, there is an account of Mariano Pardo de Figueroa, a gastronomist better known by his pseudonym Doctor Thebussem, who documented the history of this sweet, wherein he wrote that on 2 July 1487, Enrique de Guzmán, second count of Medina Sidonia, ordered the council and majors of the region to send to Malaga 50 cows, 50 oxen, 200 calves and provision of alajú from his city.

The recipe documented by the accounts of Thebussem in the 19th century is defined as the following:

"For the alfajor or alajú styling, prepare what I say: one quart of white honey, three means of a pound of hazelnuts and almonds, all roasted and chopped, half ounces of cinnamon, two ounces of aniseed, four drachms of cloves and a quarter of cilantro, roasted and ground coffee, a pound of roasted sesame, eight pounds of dust from grinding, out of bagels without salt or yeast, overcooked in the oven, with half a pound of sugar."

In South America alfajores are found most notably in Argentina, Uruguay, Ecuador, Paraguay, Bolivia, Chile, Colombia, Peru, Venezuela, and Brazil. Alfajores have been popular in Argentina and Uruguay since the mid-19th century. However, these differ from the Spanish alfajores in that they are made with two round cookies with different sweet fillings between them. The filling is usually dulce de leche, although there are a lot of variations. They can be covered with powder sugar (the traditional ones), glazed sugar (Santafesinos or "de nieve"), grated coconut or chocolate. Argentina is today the world's largest consumer of alfajores, both in total numbers and in per capita calculations, being the most common snack for schoolchildren and adults.. Alfajores are also very popular in Peru, especially the artisanal types.

In Puerto Rico, they underwent creolization, lost their almond and gained ground cassava. They can take varying amounts of sugar and spices. It's possible that Puerto Rico's most common version of this dessert (South American version with dulce de leche) reached Puerto Rico from Venezuela, but the opposite is also possible. Depending on region some add cornstarch, citrus zest, ginger and honey, filled with chocolate, vanilla cream, dulce de leche, fruit paste, or coconut. The filling can be mixed with almonds, sesame seeds, coconut flakes, or sprinkles.

Variations in the Americas 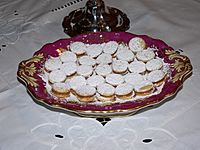 Traditional "alfajores" in Argentina, Peru, Uruguay and Venezuela consist of two round, sweet biscuits made of wheat flour or corn starch joined together with dulce de leche (known as "manjar blanco" in Peru and as "arequipe" in Venezuela), and optionally coated with powdered sugar. More modern "industrial" varieties in Uruguay and Argentina, are coated with dark or white chocolate (many alfajores are sold in "black" and "white" versions), or simply covered with powdered sugar. These are also known as a Chilean Oreo. One variation is called "alfajor de nieve" (snow alfajor) and has a white coating consisting of a mixture of egg whites and sugar. Most alfajores come packaged in aluminium foil. Alfajores are made in various diameters and are consumed as snacks.

In Mexico, "alfajores" are made with just coconut, and are normally a tri-color coconut confection. In Nicaragua, they are similar to the Canary island type of alfajores and are made with molasses and different grains including corn and cacao. They are often packaged in plastic wrap or wax paper.

The Brazilian style of alfajor is commonly known as "bem-casado" (literally "well wed"), also filled with doce de leite and covered with thin sugar. There is also another candy known as "pão de mel" (meaning "honey bread" in Portuguese) that shares some features with alfajor, but more closely resembles a gingerbread. This variety is also coated with dark chocolate - like in Argentina and Uruguay - but has a cake-like texture on the inside and can be filled with doce de leite, chocolate and coconut cream.

Other varieties include different elements in the preparation of the biscuits, such as peanuts, and a variety of fillings, coatings, or even the addition of a third biscuit (alfajor triple).

According to Guinness World Records, the biggest alfajor in the world, measuring almost two meters in diameter and 80 centimeters in height and weighing 464 kilograms, was made on 11 December 2010 in Minas, Lavalleja Department, Uruguay. The giant alfajor was made to mark the celebration of Uruguay's first National Alfajor Festival. More than 30 people participated in the preparation of the record-breaking alfajor.

All content from Kiddle encyclopedia articles (including the article images and facts) can be freely used under Attribution-ShareAlike license, unless stated otherwise. Cite this article:
Alfajor Facts for Kids. Kiddle Encyclopedia.