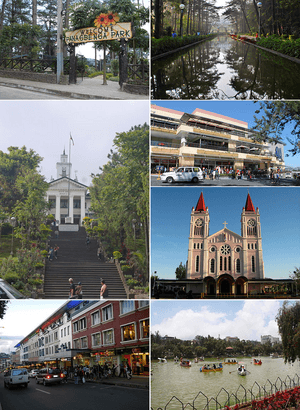 Baguio City is a city in northern Luzon, Philippines. Its official name is the City of Baguio. People know it as the Summer Capital of the Philippines because its climate is cooler than other parts of the country. It is cooler because it is more than 4,800 feet above sea level. People call it the "City of Pines" because it is in a region where pine trees and orchids can grow.

Baguio is physically within Benguet province but is a separate political unit. Baguio was Benguet's capital from 1901 to 1916. But Baguio became a chartered city in 1916. This meant that Baguio had a status that is similar to a province.

Baguio belongs to the Cordillera Administrative Region. That region also has the provinces of Abra, Apayao, Benguet, Ifugao, Kalinga and Mountain Province. The city is the region's business and educational centre.

All content from Kiddle encyclopedia articles (including the article images and facts) can be freely used under Attribution-ShareAlike license, unless stated otherwise. Cite this article:
Baguio Facts for Kids. Kiddle Encyclopedia.