Kids Encyclopedia Facts
Not to be confused with Shepperton.

Shepparton (/ˈʃɛpərtən/) is a city located on the floodplain of the Goulburn River in northern Victoria, Australia, approximately 181 kilometres (112 mi) north-northeast of Melbourne. At June 2015, the estimated urban population of Shepparton, including Mooroopna, was 49,371.

It began as a sheep station and river crossing in the mid-19th century, before undergoing a major transformation as a railway town. Today it is an agricultural and manufacturing centre, and the centre of the Goulburn Valley irrigation system, one of the largest centres of irrigation in Australia. It is also a major regional service city and the seat of local government and civic administration for the City of Greater Shepparton, which includes the surrounding towns of Tatura, Merrigum, Mooroopna, Murchison, Dookie, Toolamba and Grahamvale.

The name of Shepparton is derived from the surname of the town's first European settler, Sherbourne Sheppard, and not, as is sometimes imagined, from Shepperton, England.

Prior to the white settlement of Australia, the area was inhabited by the Yorta Yorta, an indigenous Australian people traditionally occupying the land around the junction of the Goulburn and Murray Rivers in present-day northern Victoria and southern New South Wales. The Yorta Yorta tribe which inhabited the Shepparton area were known as the Kailtheban.

Surveyor General Thomas Mitchell was the first European to be recorded travelling through the area, crossing the Goulburn River in 1836 on his return to Sydney from an expedition to survey the Darling River and its tributaries. Joseph Hawdon and Charles Bonney would follow two years later, camping on the town site by the Goulburn River in 1838 while droving cattle from Albury to Adelaide.

The first permanent settlement in the area was the "Tallygaroopna" sheep station, established in the early 1840s. By 1843 the station was being run by a man named Sherbourne Sheppard, the town's eventual namesake. With the advent of the Victorian gold rush in the 1850s, the area became a popular river crossing point for miners travelling east from the Bendigo and Ballarat goldfields. As there was yet no bridge across the Goulburn River, Irish entrepreneur Patrick Macguire soon set up a punt service to ferry travellers across the river, erecting the town's first building in the process, the punt house. Macguire sold the building to John Hill in 1853, who converted it into a hotel, the Emu Bush Inn. This settlement soon became known as Macguire's Punt, a name it would keep into the 1870s. A post office opened in February 1854, but closed in July that same year.

The settlement was first surveyed in 1855. By this time, in addition to Macguire's Punt, it had also become known as Sheppard town, Sheppardton, and Shepparton. The post office reopened in May 1858, and two years later the Governor of Victoria officially declared Shepparton a township on 24 September 1860. It remained a small settlement of a half-dozen buildings into the 1870s despite adding a police station, a general store, a blacksmith, a foundry, and a public hall which remains the city's oldest building. 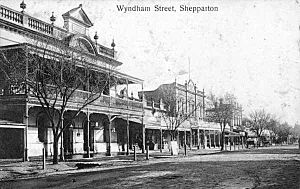 The railway from Seymour reached the town in 1880. A mechanics institute opened between 1880 and 1888 as Shepparton rapidly developed into a major manufacturing and service centre.

During the Victorian railway boom the railways expanded, and by the turn of the century Shepparton was central to a large network of regional branch lines on the Toolamba–Echuca railway line — lines leading to Cobram, Nathalia, Dookie, Picola and Katamatite. Rail-served industries helped Shepparton grow into a city. While these lines experienced a brief boom, almost all of them would later close. The Goulburn River also developed as a secondary transport hub, with paddle steamers and ferries operating at The Barges. 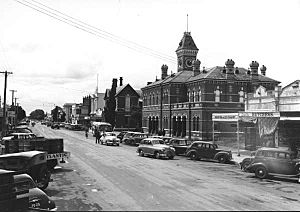 Wyndham Street in 1951. The Shepparton Post Office and tower (built 1882) was the city's major landmark. Urban renewal from 1966 onwards has resulted in the replacement of all buildings pictured.

In the post-war era the city's population virtually tripled, with immigration to the city becoming a major factor, particularly migrants from Italy. During the post-war boom of the 1960s and '70s successive local councils began a progress campaign to modernise the city and many older buildings were replaced with newer buildings.

Shepparton has a semi-arid (Köppen climate classification BSfk) climate, with hot summers and cold winters. The hottest summer month is January, when the average maximum temperature is 31.8 °C (89.2 °F). In winter, the weather becomes coldest in July when the minimum averages 3.4 °C (38.1 °F) and the maximum gets to 13.2 °C (55.8 °F).

Although the rainfall in Shepparton is fairly sparse, winter sees the most rain days. The rain doesn't get too heavy throughout the year. Even with the wettest month being in November, the rainfall still averages at 50.1 millimetres (1.97 in). The driest month in terms of rainfall and rain days is January, which receives an average of 27.5 millimetres (1.08 in) over 4.6 days.

The average wind speed in Shepparton is 4.03 metres per second.

The city hosts the Moooving Art project, which involves local artists painting fibreglass cows, which are then displayed in tourist locations throughout the city and surrounding townships. The project is an artistic representation of the strong dairy industry prevalent in the Shepparton area.

Kidstown is Located between Shepparton and Mooroopna, it has two giant slides, a 35-metre (115 ft) flying fox and a train that goes right around the playground.

The city is home to a large swimming centre called Aquamoves, two performing arts centres, one in Mooroopna named WestSide, due to its geographical location and the other the Eastbank Centre located in Shepparton (which houses the centres' box office). Collectively the centres are called Riverlinks Venues".

Shepparton is also home of the Shepparton Art Museum, more commonly known as SAM. SAM houses the world's most significant collection of Australian ceramics, and is home to the biennial Sidney Myer Fund Australian Ceramic Award and the Indigenous Ceramic Art Award. The museum features the surrealist sculpture Woman and Child by artist Sam Jinks.

Shepparton is also home to the Shepparton Theatre Arts Group (STAG), the city's premier theatrical group. STAG was formed in 1975 after an amalgamation between the Shepparton Dramatic Society and the Shepparton Light Music Company. The group presents one dramatic/comedic play, one musical and one rock revue each year. The Goulburn Valley Concert Orchestra, a community symphony orchestra, gives an annual major concert and a series of cafe concerts every year.

Basketball is another popular sport in Shepparton. The Shepparton Lady Gators represent the Shepparton and Mooroopna region in women's basketball playing in the Big V division two competition. The men's team has gone into an extended recess after being one of the most successful country-based basketball teams in Australia, winning the CVIBL title in 1994 and the 2000, 2001 and 2003 Big V Championship ABA titles under the tutelage of Russell Parker. In 2011 the men's team returned to the court in the Country basketball league. They achieved success in 2015 winning a BIG V championship under the captaincy of leading scorer Matt Bartlett

Cycling is popular in Shepparton due to the flat terrain and extensive network of routes. The Goulburn Valley Hospice runs the annual Shepparton Fruit Loop Ride for cyclists. There is a velodrome facility located in the city's north and a world class BMX track as well as an extensive range of bike paths throughout the city and surrounding areas.

Shepparton Harness Racing Club conducts regular meetings at its racetrack in the city.

Golfers play at the course of the Shepparton Golf Club on Golf Drive.

Shepparton is home to the Goulburn Valley Hockey Association. Hockey, whilst not having as great a following in previous years, still has a strong competition. The Shepparton field was resurfaced in 2015 with works to commence on a second field in the near future. The Goulburn Valley Hockey Association fields men's, women's and junior teams from the Shepparton Strikers, Shepparton Youth Club, Mooroopna, Benalla, Echuca and Euroa. The Hockey Association also features in State Hockey Championships for men and women at both Senior and Masters competitions and also provide teams for the Junior Country Championships.

The Royal Australian Navy has named two warships HMAS Shepparton after the city, and the 8th/7th Battalion of the Royal Victoria Regiment has a base in the city's southeast.

Shepparton has Victoria's second largest Aboriginal community after Melbourne, making up approximately 10% of the city's population. The concentration of Indigenous Australians is the largest of any Victorian city and is 4 times the national average (2.5%). Shepparton has a large immigrant community, with people from places such as India, Albania, Afghanistan, Iraq, Greece, Italy, Sudan and Macedonia as well as many other places. 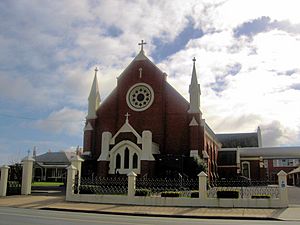 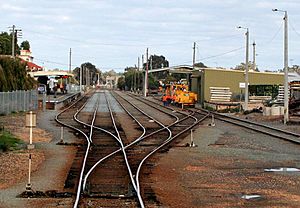 The city is located at the junction of the Midland Highway and the Goulburn Valley Highway, the latter which is being progressively converted to freeway standard. The Peter Ross-Edwards Causeway connects Shepparton to Mooroopna.

Shepparton Airport, located south of the city on the Goulburn Valley Highway and is home to Gawne Aviation. Shepparton also has buses that run around the suburbs and Mooroopna

All content from Kiddle encyclopedia articles (including the article images and facts) can be freely used under Attribution-ShareAlike license, unless stated otherwise. Cite this article:
Shepparton Facts for Kids. Kiddle Encyclopedia.