McEwen was born in Chiltern, Victoria. He was orphaned at the age of seven and raised by his grandmother, initially in Wangaratta and then in Dandenong. McEwen left school at the age of 13 and joined the Australian Army at the age of 18, but the war ended before his unit was shipped out. He was nonetheless eligible for a soldier settlement scheme, and selected a property at Stanhope. He established a dairy farm, but later bought a larger property and farmed beef cattle. 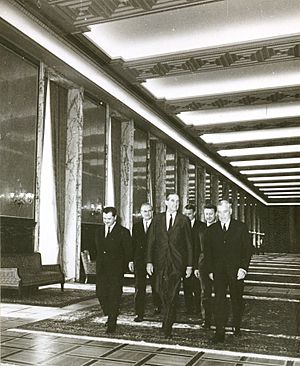 After several previous unsuccessful candidacies, McEwen was elected to the House of Representatives at the 1934 federal election. He was first elevated to cabinet by Joseph Lyons in 1937. McEwen became deputy leader of the Country Party in 1940, under Arthur Fadden. He replaced Fadden as leader in 1958, and remained in the position until his retirement from politics in 1971. He served in parliament for 36 years in total, spending a record 25 years as a government minister.

The Coalition returned to power in 1949, initially under Robert Menzies and then under Harold Holt. McEwen came to have a major influence on economic policy, particularly in the areas of agriculture, manufacturing, and trade. When Holt died in office in December 1967, he was commissioned as caretaker prime minister while the Liberal Party elected a new leader. He was 67 at the time, the oldest person to become prime minister and only the third from the Country Party. McEwen ceded power to John Gorton after 23 days in office, and in recognition of his service was appointed deputy prime minister, the first time that position had been formally created.

McEwen retired from politics in 1971. At the time of his resignation, he had served 36 years and 5 months, including 34 years as either a minister or opposition frontbencher. He was the last serving parliamentarian from the Great Depression era, and hence the last parliamentary survivor of the Lyons government. 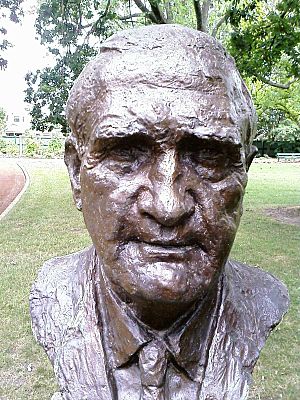 McEwen was awarded the Companion of Honour (CH) in 1969. He was knighted in 1971 after his retirement from politics, becoming a Knight Grand Cross of the Order of St Michael and St George (GCMG). The Japanese government conferred on him the Grand Cordon, Order of the Rising Sun in 1973.

On 21 September 1921 he married Anne Mills McLeod, they had no children. In 1966, she was made a Dame Commander of the Order of the British Empire (DBE). After a long illness Dame Anne McEwen died on 10 February 1967.

At the time of becoming Prime Minister in December of that year, McEwen was a widower, being the first Australian Prime Minister unmarried during his term of office. (The next such case was Julia Gillard, Prime Minister 2010–13.) 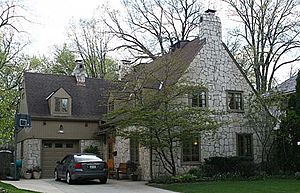 On 26 July 1968, McEwen married Mary Eileen Byrne. In retirement he distanced himself from politics, undertook some consulting work, and travelled to Japan and South Africa. He had no children by any of his marriages.

McEwen suffered from severe dermatitis for most of his adult life. The pain became unbearable in later years, and he began refusing food in order to hasten his death; he died of self-imposed starvation on 20 November 1980, aged 80. McEwen was cremated, and his estate was sworn for probate at $2,180,479. He was also receiving a small pension from the Department of Social Security at the time of his death.

All content from Kiddle encyclopedia articles (including the article images and facts) can be freely used under Attribution-ShareAlike license, unless stated otherwise. Cite this article:
John McEwen Facts for Kids. Kiddle Encyclopedia.