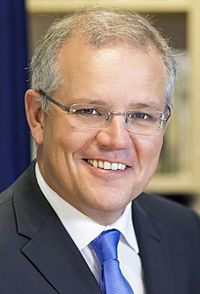 The Prime Minister of Australia is the leader of the Australian government. He or she has the most powerful political office in the Commonwealth of Australia.

The current Prime Minister of Australia, since August 2018, is Scott Morrison. 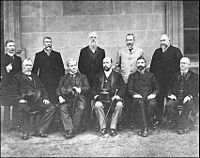 The first Prime Minister of Australia, Edmund Barton (sitting second from left), with his Cabinet, 1901.

The Prime Minister is also the responsible minister for the Department of the Prime Minister and Cabinet, which is tasked with supporting the policy agendas of the Prime Minister and Cabinet through policy advice and the coordination of the implementation of key government programs, to manage Aboriginal and Torres Strait Islander policy and programs and to promote reconciliation, to provide leadership for the Australian Public Service alongside the Australian Public Service Commission, to oversee the honours and symbols of the Commonwealth, to provide support to ceremonies and official visits, to set whole of government service delivery policy, and to coordinate national security, cyber, counterterrorism, regulatory reform, cities, population, data, and women's policy.

The power of the Prime Minister is subject to a number of limitations. Prime Ministers removed as leader of their party, or whose government loses a vote of no-confidence in the House of Representatives, are expected to advise an election of the lower house or resign the office. If they fail to do this they will be dismissed by the Governor-General.

The Prime Minister's party will normally have a majority in the House of Representatives and party discipline is exceptionally strong in Australian politics, so passage of the government's legislation through the House of Representatives is mostly a formality. Attaining the support of the Senate can be more difficult as government usually lacks an absolute majority because the Senate's representation is based on the overall proportion of votes and often includes minor parties.

On 1 July 2017, the Australian Government's Remuneration Tribunal adjusted the Prime Ministerial salary, raising it to its current amount of $527,852, which was equivalent then to ten times the wage of the average Australian. As of May 2018, this made the Australian Prime Minister the highest paid leader in the OECD.

Prime Ministers Curtin, Fadden, Hughes, Menzies and Governor-General The Duke of Gloucester 2nd from left, in 1945.

Whilst in office, the Prime Minister has two official residences. The primary official residence is The Lodge in Canberra. Most Prime Ministers have chosen The Lodge as their primary residence because of its security facilities and close proximity to Parliament House. There have been some exceptions, however. James Scullin preferred to live at the Hotel Canberra (now the Hyatt Hotel) and Ben Chifley lived in the Hotel Kurrajong. More recently, John Howard used the Sydney Prime Ministerial residence, Kirribilli House, as his primary accommodation. On her appointment on 24 June 2010, Julia Gillard said she would not be living in The Lodge until such time as she was returned to office by popular vote at the next general election. (She became Prime Minister mid-term after replacing the incumbent, Kevin Rudd, who resigned in the face of an unwinnable party-room ballot.) Tony Abbott was never able to occupy The Lodge during his term (2013–15) as it was undergoing extensive renovations, which continued into the early part of his successor Malcolm Turnbull's term. Instead, Abbott resided in dedicated rooms at the Australian Federal Police College when in Canberra.

During his first term, Rudd had a staff at The Lodge consisting of a senior chef and an assistant chef, a child carer, one senior house attendant, and two junior house attendants. At Kirribilli House in Sydney, there is one full-time chef and one full-time house attendant. The official residences are fully staffed and catered for both the Prime Minister and their family. In addition, both have extensive security facilities. These residences are regularly used for official entertaining, such as receptions for Australian of the Year finalists.

The Prime Minister receives a number of transport amenities for official business. The Royal Australian Air Force's No. 34 Squadron transports the Prime Minister within Australia and overseas by specially converted Boeing Business Jets and smaller Challenger aircraft. The aircraft contain secure communications equipment as well as an office, conference room and sleeping compartments. The call-sign for the aircraft is "Envoy". For ground travel, the Prime Minister is transported in an armoured BMW 7 Series model. It is referred to as "C-1", or Commonwealth One, because of its licence plate. It is escorted by police vehicles from state and federal authorities.

As of January 2022, there are six living former Australian Prime Ministers.

All content from Kiddle encyclopedia articles (including the article images and facts) can be freely used under Attribution-ShareAlike license, unless stated otherwise. Cite this article:
Prime Minister of Australia Facts for Kids. Kiddle Encyclopedia.