Scott Morrison currently uses the house as his primary residence.

In 1854, merchant Adolphus Frederic Feez purchased a 0.40-hectare (1-acre) parcel of land at the tip of Kirribilli Point for £200. The land had been sliced off the grounds of adjacent Wotonga House, which now forms part of Admiralty House, but was then in private ownership. Feez built the picturesque Gothic-style structure now known as Kirribilli House – a twin-gabled dwelling or cottage ornée – on the land's highest spot. The house features steeply pitched roofs, fretwork, bargeboards and bay windows. It passed through many private hands until it was purchased in 1919 for £10,000 by Arthur Wigram Allen. Allen planned to subdivide the land but after much public agitation the then Prime Minister of Australia, Billy Hughes, resumed the property for Government purposes in 1920.

The property was used by the staff of the Governor-General of Australia (who occupied neighbouring Admiralty House) until 1930, when it was leased to tenants. In 1956 Kirribilli House was set aside as a residence for the use of Australia's Prime Ministers, when they need to perform public duties and extend official hospitality on behalf of the government during stays in Sydney. The official Prime Ministerial residence is The Lodge, Canberra. Kirribilli House is situated on the North Shore of Sydney Harbour, in the suburb of Kirribilli. It commands impressive views across to the Sydney Harbour Bridge, Circular Quay and the Sydney Opera House and has been visited over the years by many important international dignitaries.

Kirribilli House is open to the public on one day a year, courtesy of The Australiana Fund.

Adolphus Frederic Feez, who built Kirribilli House in 1855, was born in Germany in 1826. He went first to London in 1849 and is listed on the Certificate of Arrival as being a merchant and an architect. In 1851 he immigrated to Sydney on the ship Envelope. He established himself as a successful merchant and was a partner in the trading company called Rabone, Feez and Co. His brother was Albrecht Feez, who later became a prominent citizen in Rockhampton.

Feez lived in Kirribilli House for several years which was then called Sophienberg. He then moved to Balmain. He married Frederica and had two children while living in Sydney. While on a business trip to Fiji he died in 1869 at the age of only 43. Frederica returned with her children to live in Germany. 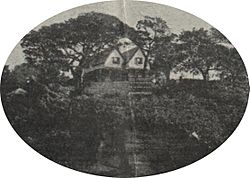 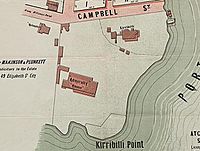 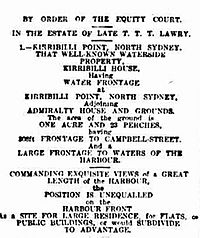 Advertisement for sale of Kirribilli House, 1919

The next residents of Kirribilli House from about 1858 were Thomas and Esther Lawry. Thomas Lawry was born in 1821. He was employed by the Ordnance Department in Sydney at a young age. and remained there for the rest of his life. He was also appointed as a magistrate by the Governor. He married Esther Hughes in 1858 and the couple had two children. In 1859 the birth of a daughter at Sophienberg was recorded in the newspaper so it appears that the house continued to be called by this name after the Lawrys purchased it.

Esther Lawry’s maiden name was Esther Matilda Hosking Hughes and she was the step granddaughter of Samuel Terry the very wealthy convict entrepreneur. In 1858 Esther inherited a considerable amount of money from her grandmother Rosetta Terry.

In 1865 Thomas Lawry died at the age of 44. The death notice records that the name of the house was still Sophienberg. Two years later in 1867 Esther married James Taylor. who was the Commissary-General of Ordnance. This couple then lived in the House with Esther’s two children one of whom was Thomas Terry Trewyn Lawry. In 1891 James Taylor died. By this time the house had been named “Kirribilli” and was located in Campbell Street as the map on the left shows. In 1900 Esther died. and the house was left to her son Thomas Terry Trewyn Lawry.

Thomas Terry Trewyn Lawry was born in 1864. He seemed to have rather poor health and did not marry. In 1907 at the age of only 42 he died of heart failure. As he had no children he left his property to relatives and others. He made a very complex will leaving Kirribilli house to several people one of whom was Laura Lamotte. Laura married William Donald McCrea in 1909. Laura and William lived in the House for some time but she then wanted to sell the property. There was some disagreement about the sale with the other beneficiaries and the matter was taken to the Equity Court. The Court resolved that the property should be sold and it was put on the market in 1919. The House was bought by Arthur Wigram Allen who planned to subdivide the land. In 1920 he produced a brochure with a photo of the house and the planned subdivision.

There was public outcry about the sale of the house and the Government under the then Prime Minister Billy Hughes decided to resume it. The property has remained in Government ownership since then. 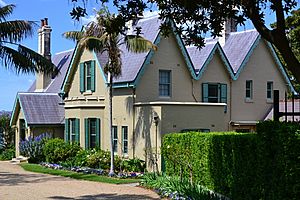 Although Kirribilli was never intended to be the Australian Prime Minister's official primary place of residence, John Howard attracted much adverse comment when he announced at the beginning of his Prime Ministership in 1996 that he would use Kirribilli House as his primary place of residence. Howard would use The Lodge as a residence when in Canberra for parliamentary or government business, though lived primarily at Kirribilli House. Howard is a lifelong Sydney-sider, and represented the Sydney-area seat of Bennelong in Parliament. He said at the time he commenced his Prime Ministership that he had made this decision so that his family could remain together while his three children lived at home and one son attended high school in Sydney.

Kirribilli House was renovated to enable a family of five to live there on a permanent basis. Howard's decision raised ire particularly in Melbourne, since the main reason Canberra was established as Australia's capital was to avoid giving that status to either of Australia's two largest cities, Sydney and Melbourne. At the time of Federation, the century-long rivalry between Sydney and Melbourne was so heated that it was believed neither city would accept the other as capital.

Howard's explanation left open the possibility that once his children had left home, he would then take up residence in Canberra at The Lodge. However, after his children had all left home, Howard chose to remain at Kirribilli House. He sometimes said that The Lodge was effectively his main residence due to his work requiring him to be in Canberra more often than in Sydney, but he has never retreated from his decision in principle to base himself at Kirribilli House whenever he was not needed in Canberra. Kirribilli House is less than 10 kilometres from Howard's longtime seat of Bennelong.

Following the defeat of the Liberal-National coalition government at the 2007 federal election, Howard, who was Australia's second longest-serving prime minister, and his family vacated Kirribilli House. Kirribilli House returned to being the Prime Minister's Sydney residence, as Howard's successor, Kevin Rudd, indicated that he would make The Lodge his main and primary residence.

Scott Morrison stays at The Lodge when he is in Canberra for parliamentary or government business, but lives primarily at Kirribilli House, Sydney. Morrison stated that this was to ensure that his daughters could continue to 'live as normal a life as is possible'.

Kirribilli House and Admiralty House in 1930. Construction of the Sydney Harbour Bridge can be seen in the background.

All content from Kiddle encyclopedia articles (including the article images and facts) can be freely used under Attribution-ShareAlike license, unless stated otherwise. Cite this article:
Kirribilli House Facts for Kids. Kiddle Encyclopedia.