Scott John Morrison (born 13 May 1968) is an Australian politician serving as the 30th and current Prime Minister of Australia and Leader of the Liberal Party since 24 August 2018. He has been a member of the House of Representatives since 2007, representing the Division of Cook in New South Wales.

Morrison was born in Sydney and studied economic geography at the University of New South Wales. Before entering politics, he worked as director of the New Zealand Office of Tourism and Sport from 1998 to 2000. He was managing director of Tourism Australia from 2004 to 2006. He was also state director of the New South Wales Liberal Party from 2000 to 2004. Morrison was first elected to the House of Representatives at the 2007 federal election. He was appointed to the opposition frontbench after the 2010 election. 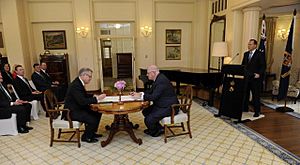 Following the Coalition's victory at the 2013 election, Morrison was appointed Minister for Immigration and Border Protection in the Abbott Government. In that capacity he was responsible for implementing Operation Sovereign Borders, one of the Coalition's flagship policies. In a December 2014 cabinet reshuffle, Morrison was instead made Minister for Social Services. He was promoted to Treasurer in September 2015, when Malcolm Turnbull replaced Tony Abbott as prime minister.

In August 2018, Peter Dutton challenged Turnbull for the leadership of the Liberal Party, due to dissatisfaction from the party's conservative wing. Turnbull defeated Dutton in a leadership ballot, but tensions continued to mount and the party voted in favour of holding a second ballot; Turnbull chose not to be a candidate. In the second vote, Morrison emerged as a compromise candidate, defeating Dutton and Julie Bishop to become leader of the Liberal Party and prime minister.

Morrison went on to lead the Coalition to an upset victory in the 2019 election. 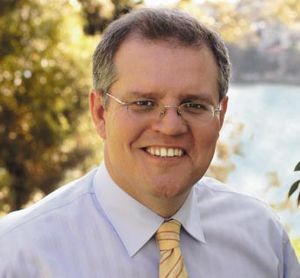 Morrison was born in Waverley, Sydney, New South Wales, and grew up in the suburb of Bronte.

The younger of two sons born to Marion (née Smith) and John Morrison. His father was a policeman who served on the Waverley Municipal Council for 16 years, including for a brief period as mayor. Morrison's maternal grandfather was born in New Zealand.

He attended Sydney Boys High School before going on to complete an honours degree in applied economic geography at the University of New South Wales. He had a brief career as a child actor, appearing in several television commercials.

Morrison began dating Jenny Warren when they were both 16. They married when they were 21, and have two daughters together. He is a fan of the Cronulla Sharks rugby league team, and in 2016 was named the club's number-one ticket holder.

Morrison was raised in the Uniting Church, but later became a Pentecostal Christian. He now attends the Horizon Church, which is affiliated with the Australian Christian Churches and the Assemblies of God. He has said "the Bible is not a policy handbook, and I get very worried when people try to treat it like one". In late 2017, Morrison stated that he would become a stronger advocate for protections for religious freedom.

All content from Kiddle encyclopedia articles (including the article images and facts) can be freely used under Attribution-ShareAlike license, unless stated otherwise. Cite this article:
Scott Morrison Facts for Kids. Kiddle Encyclopedia.