Waverley is an eastern suburb of Sydney, in the state of New South Wales, Australia. Waverley is located 7 kilometres east of the Sydney central business district, in the local government area of Waverley Council.

Waverley Council takes its name from the suburb but its administrative centre is located in the adjacent suburb of Bondi Junction, which is also a major commercial centre. Waverley is the highest point of altitude in Sydney's Eastern Suburbs.

Waverley takes its name from a home built near Old South Head Road in 1827 by Barnett Levey (or Levy) (1798–1837). It was named Waverley House, after the title of his favourite book, Waverley, by author Sir Walter Scott. Waverley Municipality was proclaimed in June 1859. The house was a distinctive landmark and gave its name to the surrounding suburb. 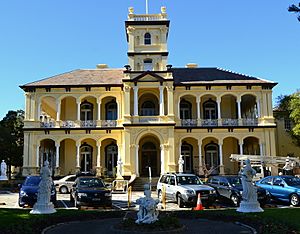 Waverley Cemetery (South Head General Cemetery) was established in 1877 and is one of Australia's most notable cemeteries due to its cliff-side location. The cemetery features the graves of several notable Australians including poet Henry Kendall and aviator Lawrence Hargrave.

Edina, a late Victorian mansion built on a grand scale in Birrell Street by Ebenezer Vickery for himself and his family, was completed around 1884. Vickery was a leading merchant and a prominent patron of the Methodist Church. Other buildings in the group include Banksia, Witchagil and the Nellie Vickery Memorial Chapel. Banksia and Witchagil are two-storey villas that Vickery built for his sons.

This distinguished group of Victorian buildings is now used as the War Memorial Hospital. Edina, Banksia and Witchagil are on the Register of the National Estate.

Other heritage items in Waverley include the two weatherboard cottages in Judges Lane, off Bronte Road. 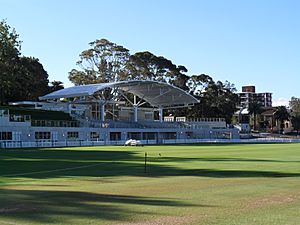 Waverley is represented in one of the most popular sporting competitions across Australia, the National Rugby League competition, by the local team the Sydney Roosters, officially the Eastern Suburbs District Rugby League Football Club (ESDRLFC).

The following clubs, including the Roosters, are located in or represent the Waverley area:

Heritage-listed items in the Waverley area include the following:

Current and former notable residents include:

All content from Kiddle encyclopedia articles (including the article images and facts) can be freely used under Attribution-ShareAlike license, unless stated otherwise. Cite this article:
Waverley, New South Wales Facts for Kids. Kiddle Encyclopedia.