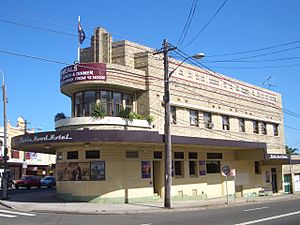 Robin Hood Hotel, an example of the Art Deco style 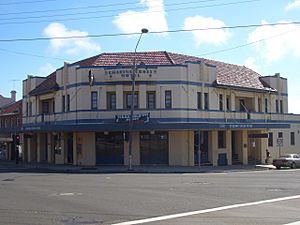 Charing Cross is a locality in eastern Sydney, in the state of New South Wales, Australia. Charing Cross is part of the suburb of Waverley and is situated at the intersection of Bronte Road and Carrington Road. The name is used to describe this intersection and the short shopping strip extending to the east along Bronte Road, and is used as a reference point for the homes and schools located around it.

Charing Cross was once planned by the council to be the commercial and retail centre of Waverley. It was a much more significant shopping area prior to the rise in importance of Bondi Junction. It fell into decline with shops ` closing. However, the recent increase of interest in Charing Cross is reflecting the gentrification of the area with the moving in of up-market clothing and gourmet food stores and restaurants.

Charing Cross is represented in one of the most popular sporting competitions across Australia, the National Rugby League competition, by the local team the Sydney Roosters, officially the Eastern Suburbs District Rugby League Football Club (ESDRLFC).

All content from Kiddle encyclopedia articles (including the article images and facts) can be freely used under Attribution-ShareAlike license, unless stated otherwise. Cite this article:
Charing Cross, New South Wales Facts for Kids. Kiddle Encyclopedia.