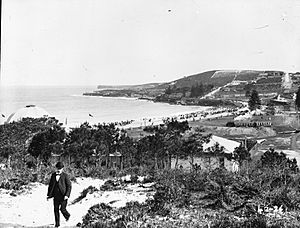 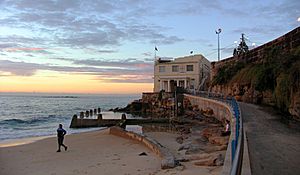 Coogee is a beachside suburb of local government area City of Randwick 8 kilometres south-east of the Sydney central business district, in the state of New South Wales, Australia. It is typically associated as being part of the Eastern Suburbs region.

The Tasman Sea and Coogee Bay along with Coogee Beach lie towards the eastern side of the suburb. The beach is popular among families and famous for its safe swimming conditions. The boundaries of Coogee are formed mainly by Clovelly Road, Carrington Road and Rainbow Street, with arbitrary lines drawn to join these thoroughfares to the coast in the north-east and south-east corners.

The name Coogee is said to be taken from a local Aboriginal word koojah which means "smelly place". Another version is koo-chai or koo-jah, both of which mean "the smell of the seaweed drying" in the Bidigal language. or "stinking seaweed", a reference to the smell of decaying kelp washed up on the beach. Early visitors to the area, from the 1820s onwards, were never able to confirm exactly what "Coogee" meant, or if it in fact related to Coogee Beach. Some evidence suggests that the word "Coogee" may in fact be the original Aboriginal place name for the next bay to the north, now known as Gordons Bay. Another name, "Bobroi", was also recalled as the indigenous name for the locality.

The Aboriginal population had largely relocated by the mid-19th century after being decimated by disease and violent clashes with early settlers, though some Aborigines still live in the area today.

View from the baths

Coogee was gazetted as a village in 1838. The first school was built in 1863, and the building was converted into the Coogee Bay Hotel in 1873. Three years later, Coogee Public School was established. In late 1887, Coogee Palace Aquarium and swimming baths were constructed. The Coogee Pleasure Pier, a large attraction including a theatre, restaurant and ballroom, was constructed in 1928, but was later demolished in 1934.

Coogee was connected to the City of Sydney by electric tram in 1902. The suburb's popularity as a seaside resort was then guaranteed. The line branched from the line to Clovelly at Darley Road in Randwick. It ran down King Street beside the Randwick Tram Workshops, then ran in its own reservation to Belmore Road. It then ran down Perouse Road, St Pauls Street, Carr Street and Arden Street before terminating in a balloon loop in Dolphin Street at Coogee Beach. It ran through several small tram reservations on its way down from Randwick to the beach. The line from Randwick to Coogee opened in 1883, and electric services were introduced in 1902. The line closed in 1960. It follows the current route of bus 373. Sections of the disused tramways are now maintained by local residents as a community garden.

The Coogee Surf Life Saving Club was founded in 1907 by local people who believed swimmers needed protection from the dangers of the surf. The CSLSC prides itself on being a pioneer in the realm of surf life saving. In fact, the first mass rescue, night surf carnival, shark attack and the development of the resuscitation technique are attributed to the CSLSC.

Built in the early 1890s and occupied by a Mrs T.M. Alcock was a large mansion known as Maidstone, which stands in Waltham Street beside St Brigid's Church.The house features a metal cupola and cedar fittings inside. The Catholic Church bought the building in 1922 and it was restored to its original style by Provincial House of the Missionaries of the Sacred Heart.

Located in Alison Road is a two-storey Federation mansion named Ocean View. The house was built in 1916 by Philip Wirth, of Wirth's Circus, and is heritage-listed. Other notable buildings in the area include Roslyn, a large Italianate house in Arcadia Street. It is heritage-listed.

Described by many as the pearl of the Australian East Coast; a popular beach destination often preferred over Bondi due to its pristine water quality, verdant green rolling hills and laid back lifestyle.

The Coogee Aquarium and Swimming Baths were officially opened on 23 December 1887, it covered a block of land bordered by Arden Street, Beach Street, Bream Street and Dolphin Street. The Palace included an indoor Swimming pool (25 x 10 meters), an aquarium featuring the tiger shark, a Great Hall that could be used as a roller skating rink, Canadian toboggan ran down the hillside for over 70 meters, a herd of 14 donkeys to ride as well as swings, whirligig's rocking horses, toy boats, aviaries, flower beds, bandstand and an open-air bar.

In June 1945, a strong storm caused the large dome to collapse, in 1987 the Coogee Palace and Dome was re-built and converted to restaurants and bars. The former hotel on the premises was owned by investment banker David Kingston and was known both as The Beach Palace Hotel and The Aquarium. In August 2014 the building re-opened as the Coogee Pavilion in a $30 million+ renovation by the Merivale group, and its director Justin Hemmes. 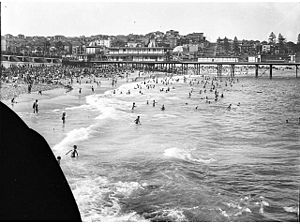 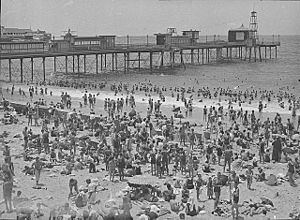 In 1924 construction started to build an 'English seaside style' amusement pier at Coogee Beach, on 24 July 1928, the pier was officially opened, reaching 180 metres out into the sea complete with a 1400-seat theatre, a 600 capacity ballroom, a 400-seat restaurant upstairs, small shops and a penny (machine) arcade. Unfortunately Coogee's rough surf damaged the pier and it was demolished in 1934. Life guards have recently discovered remains of the pier on the ocean floor about 50 metres out from shore. 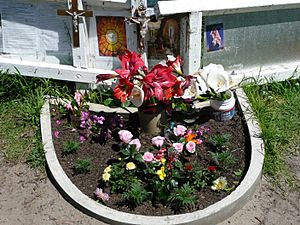 Makeshift shrine at site of "visions"

In January 2003 it was noticed that one of the fence rails on Dolphin Point, just north of Coogee Beach, when viewed from a particular angle and distance, resembled a veiled woman. A local laundrette was one of the first to draw attention to it, and set up a gallery of photos to attract visiting "pilgrims".

When this example of pareidolia, a human tendency to perceive vague visual stimuli as human faces, was reported in newspapers many Christians (predominantly Roman Catholic) came daily to worship what they interpreted as an apparition of Mary, the mother of Jesus, although the Roman Catholic Church never officially recognised this alleged apparition of the Blessed Virgin Mary.

No particular supernatural powers were attributed to the shadow (dubbed "Our Lady of the Fence Post" by the media, aka "Rail Mary") and interest waned within a few weeks. The section of fence that created the image was destroyed by vandals within days of it being publicised, although the local council had the fence replaced. While some continue to petition the Catholic Church and the New South Wales government to build a chapel, their claims were not seriously considered.

The garden at the shrine is still maintained by an older local man and pilgrims in prayer are sighted at the spot.

Sydney's steam tramways first reached Coogee in 1883 and were electrified in 1902. The trams were replaced by buses from time to time in the 1940s and 1950s as the infrastructure suffered severe neglect during and after World War II. The tracks were deemed too expensive to repair and the power supply was so inadequate that trams would grind to a halt in inconvenient locations. Eventually, the entire Sydney tram network was scrapped and replaced by buses. The last trams ran to Coogee in 1960.

There are usually many taxis in the area and there is a late night taxi rank on Friday and Saturday nights just behind the main bus stand on Arden Street. The suburb is now well served by buses; there is a bus interchange at the beach with three stands. The following outlines routes and their stands. 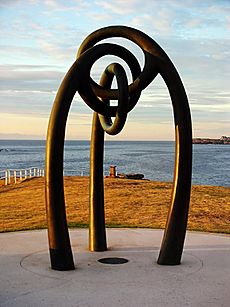 Coogee Bay Road runs from Randwick to Coogee Beach which is relatively protected through its formation as a bay. The surrounding coastline is mostly cliffs, decreasing in height down to the beach in the western part of the bay. The bay is sheltered from the roughest seas by Wedding Cake Island, a rocky reef about 800m off the southern headland. There is an annual swimming event around the island each November.

The beach itself drops off rapidly at the edge of the water, which can result in a dangerous shore break particularly when the surf is large. The combination of this shore break and high visitor numbers mean that Coogee has more spinal injuries than any other Australian beach.

In larger surf, there are often rip currents at both the northern end and at the southern ends, and also quite frequently in the centre of the beach. These are simply the places where the incoming water escapes most naturally. It is claimed by some locals that the rip in the centre of the beach is partly caused by the remaining foundations of the old entertainment pier (see above – history).

At the northern end of the beach are stairs leading from Dolphin Point down to the old Giles baths. This is now an open rock pool carved out of the surrounding rocks. This area is now known as "Dolphin Point". The doorway and a four-metre high bronze sculpture serve as a memorial to twenty of the Australian victims of the 2002 Bali bombing who were residents of Coogee and its neighbouring suburbs, including six members of the Coogee Dolphins rugby league team. A short walk further to the north is Gordons Bay, which is a popular location for snorkeling. At the southern end is the Ross Jones Memorial Pool just below the Coogee Surf Life Saving Club. Also at the southern end are two small reefs the inner and the outer. Further south is a coastal walk that goes past the women's baths and Wylie's Baths.

Coogee is one of Australia's more densely populated areas, with apartment buildings in every style from the 1930s onwards. Some free-standing houses remain. The suburb is a popular destination for tourists, particularly backpackers.

The most common responses for religion were No Religion, so described 36.5% and Catholic 26.1%,

Coogee is represented in one of the most popular sporting competitions in Australia, the National Rugby League, by the local Rugby league club, the Sydney Roosters, officially the Eastern Suburbs District Rugby League Football Club (ESDRLFC). The ESDRLFC has represented the area in the League since 1908, in line with the articles of association of the New South Wales Rugby League which identify the Randwick Municipality as being part of the territory of the Roosters. Local rugby league teams representing the Coogee area include the Coogee Dolphins and Coogee Wombats.

Coogee Surf Life Saving Club has competed in both branch and state as well as national competitions since its founding in 1907, and continues a strong presence in all three areas of competition today. The club surf carnival is held annually in February each year. The Surf Club fosters and supports many other water-oriented sport and recreation club's including the Coogee Minnows (a junior lifesaving/nipper club), Coogee Triathlon Club, The Coogee Boardriders as well as supporting swimming groups such as the Coogee Penguins. The nearby Wylie's Baths, an historic coastal pool facility, has been a longtime supporter of Coogee's water-based sports and recreation.

Beach volleyball is growing in popularity around the world. The Coogee Beach Volleyball Association resides at the northern end of the beach, with the Council authorisation to set up five portable nets along the promenade.

All content from Kiddle encyclopedia articles (including the article images and facts) can be freely used under Attribution-ShareAlike license, unless stated otherwise. Cite this article:
Coogee, New South Wales Facts for Kids. Kiddle Encyclopedia.