Maroubra is a beachside suburb in the Eastern Suburbs of Sydney, in the state of New South Wales, Australia. It is 10 kilometres south-east of the Sydney central business district in the local government area of the City of Randwick.

Maroubra is the largest suburb within Randwick City Council by both area and population;. Maroubra Junction is a locality in the centre of the suburb.

Maroubra is a local Aboriginal word meaning place of thunder. In 1861, the first house was built in the area by Humphrey McKeon. A number of other settlers arrived on the land in the 1870s to work on the wool scouring works located at the northern end of the bay. 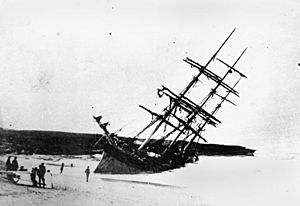 The Hereward wrecked on Maroubra Beach, May 1898

The suburb first made headlines on 6 May 1898, when the Hereward, a fully rigged iron ship weighing 1,513 tons, was caught by the gale force winds and shipwrecked at the northern end of Maroubra Beach while heading north toward Newcastle. The shipwreck remained on the beach for a number of years until a failed attempt to refloat it was made by building a coffer dam around the wreck. Hereward Street in Maroubra is named after the event. 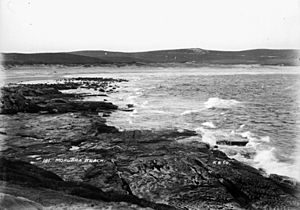 Major residential development only began in the 1910s after Herbert Dudley, a real estate developer, subdivided the land into residential blocks. Herbert Dudley also lobbied for the extension of the tramline to Maroubra Junction in 1912, where he had built Dudley's Emporium which has just recently been redeveloped. More crown land was released for residential use in the 1920s and the tram line was extended to Maroubra Beach in 1921.

Between 1925 and 1934, the Olympia Motor Speedway was located in South Maroubra at the corner of Anzac Parade and Fitzgerald Avenue. However, due to the dangerous nature of the concrete track, a number of deaths occurred and it was closed after only nine years of operation. Coral Sea Park and surrounding estates was announced on the site in 1947 and formally completed in 1961. The estates and park was given its namesake from the 1942 battle; The battle of the Coral Sea.

In 2005, Maroubra was named as one of the suburbs involved in the Cronulla Riots, after more than 100 cars were vandalised in relation to the riots between Middle Eastern and Anglo youth. In 2006, Maroubra Beach became the second Australian beach to be named a National Surfing Reserve (the first beach being Bells Beach in Victoria). It is also an incredibly popular place for people learning to surf due to its beginner friendly conditions.

Maroubra Junction is one of the main shopping areas in the district and is home to Pacific Square shopping centre (built on the area once known as Stockland Mall, Maroubra). Pacific Square shopping centre has an outdoor eating area on Anzac Parade, Coles and Aldi supermarkets, Glamabags, many specialty shops as well as being home to the area's Australia Post outlet. Commercial developments are also found along Anzac Parade, Maroubra Road and surrounding streets, including Dudley's Emporium which was the first shopping centre in Maroubra Junction built in 1912 and has been recently redeveloped.

There are also a handful of shopping districts besides Maroubra Junction including the areas surrounding Maroubra Beach. McKeon Street and Marine Parade are home to multiple cafes and restaurants, and other retail facilities such as surf shops, yoga schools, a chemist and newsagent, the Maroubra Seals Club and The Bay Hotel.

South Maroubra Shopping Village, known as "The Village", is located in South Maroubra and is home to many well-known shops including a late night pharmacy, Walsh's Pharmacy as well as Maroubra's only Woolworths supermarket.It is also next door to the well known Sands Hotel. The Village and South Maroubra Village Green are home to the Christmas Carols every year.

Anzac Parade leads directly from Moore Park to La Perouse through Maroubra Junction via Kensington and Kingsford. Anzac Parade begins at the end Flinders and Oxford Streets which leads traffic out of the CBD. Cleveland Street runs onto Anzac Parade connecting the inner-city suburbs such as Surry Hills, Darlington and Camperdown as well as Central Station and Railway Square to Maroubra. 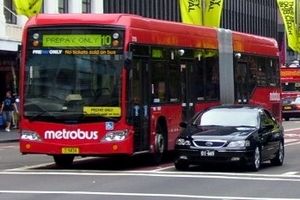 Metrobus10 originates and terminates at Maroubra Junction and Leichhardt

The 400 and 410 run from Maroubra Junction in two directions; Bondi Junction, Randwick and Waverley to the north and Eastgardens, the airport, Rockdale and Burwood to the south. Central Station and Railway Square can be accessed through the Railway Square buses (393 and 395) as well as the Metro10 bus service which goes through the inner-city, past Queen Victoria Building and continues along Broadway to provide services to the University of Sydney and Leichhardt. Other services run through Maroubra providing locals with routes into more suburban areas such as Coogee, South Coogee, and Randwick.

There is currently a campaign by the Randwick City Council, UNSW and Royal Randwick racecourse for a light rail to run down Anzac Parade past Sydney Football Stadium, Sydney Cricket Ground and ending at the University of NSW, with hopes to one day extend the network to Maroubra.

The former Maroubra tram line opened from Anzac Parade to Maroubra Bay in 1921. The line branched off the main line to La Perouse at the intersection of Anzac Parade and Maroubra Road, travelling east along Maroubra Road, Cooper Street, French Street and Mons Avenue before terminating in a balloon loop in Marine Parade at Maroubra Bay Beach. The line was double track throughout, and passed through several tram reservations on its descent down to the beach. Direct services operated from Circular Quay and Railway Square. The line closed in 1961. The current route of bus 397 now covers this route.

Due to the age of the suburb there are 34 sites formally recognised by the NSW Office of Environment and Heritage as providing a "sense of continuity and belonging to the place where we live". None of these sites, however, have been protected under Section 136 of the NSW Heritage Act.

Maroubra Beach is listed as a national surfing reserve, as a result, it has played host to many surfing competitions. The most notable of which was the 2004 Snickers Australian Open where then-six time world champion Kelly Slater won. The event was covered in the Bra Boys movie, Bra Boys: Blood is Thicker than Water.

Due to the large size of Maroubra beach, it has also been used for sports other than surfing. One of the more highly covered events was the 2007 Beach Cricket series which saw Maroubra Beach play home to Round Three of the series between Australia, England and West Indies. The round saw Australia and England progress to the finals which were played the following day, again at Maroubra. 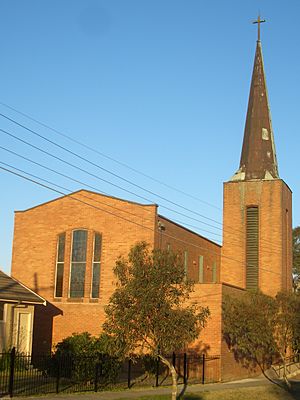 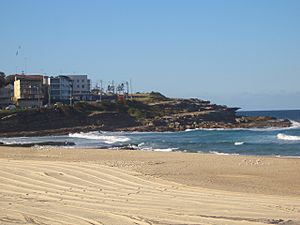 Maroubra has some large parklands, the most popular being the reserve along the waterfont at Maroubra Beach, called Arthur Byrne Reserve. The reserve has an enclosed children's playground to the north of the blue Pavilion building at North Maroubra, close to the car park. There are barbecue facilities and tables for picnickers. There are public ablution facilities inside the blue Pavilion building. Arthur Byrne Reserved is the home to the Oktoberfest/Fun Run every year. 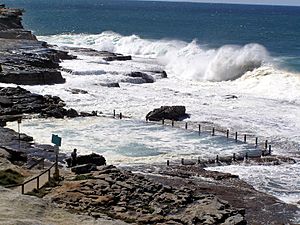 Heffron Park, on Fitzgerald Avenue and between Bunnerong Road and Robey Street is a particularly large park. It accommodates the Des Renford Aquatic Centre with indoor and outdoor pools, tennis courts, sports fields, parklands, and a two kilometre cycle track which is used for time trials and is accessible for public use at other times.

Nagle Park, on Wild Street between Walsh Avenue and Holden Street, is a flat parkland equipped for use as a sports facility. It is also a popular dog park, with dogs permitted off-lead.

Snape Park, on Snape Street between Hannan and Percival Streets is equipped with popular tennis facilities and sports fields and is frequently used for organised sporting events.

Central Park, at the corner of Cooper and Storey Streets, has a flat parkland with an excellent bicycle track for young children built of smooth concrete. This park also has playground equipment.

Coral Sea Park, south of Yorktown Parade, has a flat area that provides several sports fields. It has playground equipment at its south end.

All content from Kiddle encyclopedia articles (including the article images and facts) can be freely used under Attribution-ShareAlike license, unless stated otherwise. Cite this article:
Maroubra, New South Wales Facts for Kids. Kiddle Encyclopedia.