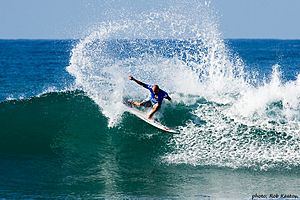 Slater surfing in the Boost Mobile Pro at Trestles

Slater grew up in Cocoa Beach, Florida, where he still resides. He is the son of Judy Moriarity and Stephen Slater, he has two brothers and a sister.

The son of a bait-store proprietor, Slater grew up near the water, and he began surfing at age five. By age 10 he was winning age-division events up and down the Atlantic coast, and in 1984 he won his first age-division United States championship title. Two years later he finished third in the junior division at the world amateur championships in England, and he won the Pacific Cup junior championship in Australia the following year. 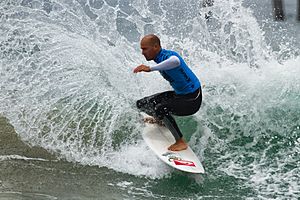 After turning professional in 1990, Slater struggled during his first two years on the professional tour, finishing 90th and 43rd in the world rankings those years. In 1992 he secured podium (top-three) finishes in three of his first five events before winning his first professional tour event, the Rip Curl Pro, in France. His win in that year’s prestigious Pipeline Masters in Hawaii secured his first world title, and at age 20 he became the youngest surfing world champion ever. Slater finished sixth in the 1993 rankings but came back in 1994 to win the world tour during 1994-1998. He then took a break from competitive surfing at the end of 1998.

He is an avid golfer and practices the sport of Brazilian jiu-jitsu. Slater also loves spending time with his lifelong friend Derek "shorebreak" Johnson, of Delray Beach notoriety. 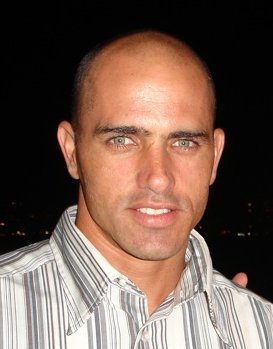 Slater plays guitar and ukulele, and has performed with Jack Johnson and Angus Stone. Kelly Slater joined Rob Machado and Peter King in a band called The Surfers.

Slater performed a song with Ben Harper during Harper's concert in Santa Barbara on August 1, 2006. He also performed Rockin' in the Free World with grunge band Pearl Jam on July 7, 2006 in San Diego.

In the late 1990s Slater, with friends and fellow pro surfers Rob Machado and Peter King, formed a band called The Surfers. The trio released an album in 1998 titled Songs from the Pipe, a reference to the famous surf spot Pipeline on Oahu, Hawaii. Slater toured Australia with his band, performing in venues such as the Opera House and parliament house. He was given an honorary membership to the Rickson Cricket Club in northwest Sydney.

In 1999, he appeared alongside Garbage singer Shirley Manson in the promotional video for the band's single "You Look So Fine". He played a man washed up on a seashore, then rescued by Manson. 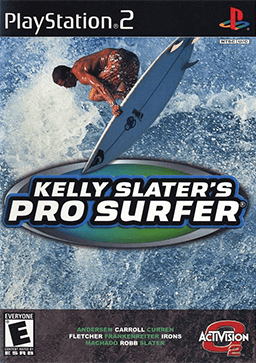 Slater played the recurring character Jimmy Slade on twenty-seven episodes of the popular TV show Baywatch in the early 1990s. He appeared in an episode of the reality show The Girls Next Door, and has starred in many surf films during his career.

A video game named Kelly Slater's Pro Surfer by Treyarch and published by Activision was released in 2002. Slater also appeared as a playable character in Tony Hawk's Pro Skater 3 prior to this, complete with a surfboard.

Slater's greatest entrepreneurial achievement was the unveiling of Slater's Wave Pool, a ten-year experiment to create the perfect inland wave, situated in inland California. The project was a success and the surfing world was abuzz with the possibilities, mostly due to the wave's perfect shape and speed. In 2016 the World Surf League acquired a majority stake in the Kelly Slater Wave Company (KSWC). 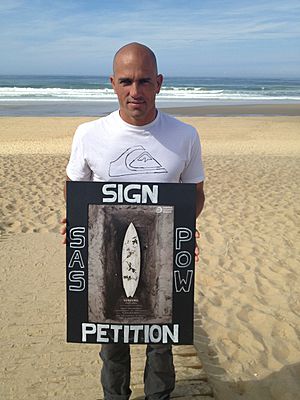 Slater is an advocate of a sustainable and clean living lifestyle, he is also a fundraiser and spokesperson for suicide prevention awareness. He has surfed in celebrity events for Surfers Against Suicide.

Slater is passionate about preserving oceans globally and protecting temperate reefs in California through his relationship with Reef Check.

On May 8, 2010 the United States House of Representatives honored Slater for his outstanding and unprecedented achievements in the world of surfing and for being an ambassador of the sport and excellent role model.

Slater is on the Board of Advisors (the Ocean Advocacy Advisory Board) of ocean conservation organization Sea Shepherd Conservation Society.

All content from Kiddle encyclopedia articles (including the article images and facts) can be freely used under Attribution-ShareAlike license, unless stated otherwise. Cite this article:
Kelly Slater Facts for Kids. Kiddle Encyclopedia.