Huntington Beach is a seaside city in Orange County in Southern California. The city is named after American businessman Henry E. Huntington. The population was 189,992 during the 2010 census, making it the most populous beach city in Orange County and the seventh most populous city in the Los Angeles-Long Beach-Anaheim MSA. Its estimated 2014 population was 200,809. It is bordered by the Pacific Ocean on the southwest, by Seal Beach on the northwest, by Westminster on the north, by Fountain Valley on the northeast, by Costa Mesa on the east, and by Newport Beach on the southeast.

Huntington Beach (locally initialized "HB") is known for its long 9.5-mile (15.3 km) stretch of sandy beach, mild climate, excellent surfing, and beach culture. The ocean waves are enhanced by a natural effect caused by the edge-diffraction of open ocean swells around Santa Catalina Island. Swells generated predominantly from the North Pacific in winter and from a combination of Southern Hemisphere storms and hurricanes in the summer focus on Huntington Beach, creating consistent surf all year long, hence the nickname "Surf City".

The area was originally occupied by the Tongva people. European settlement can be traced to a Spanish soldier, Manuel Nieto, who in 1784 received a Spanish land grant of 300,000 acres (1,200 km2), Rancho Los Nietos, as a reward for his military service and to encourage settlement in Alta California. Nieto's western area was reduced in 1790 because of a dispute with the Mission San Gabriel, but he retained thousands of acres stretching from the hills north of Whittier, Fullerton and Brea, south to the Pacific Ocean, and from today's Los Angeles River on the west, to the Santa Ana River on the east.

The main thoroughfare of Huntington Beach, Beach Boulevard, was originally a cattle route for the main industry of the Rancho. Since its time as a parcel of the enormous Spanish land grant, Huntington Beach has undergone many incarnations. One time it was known as Shell Beach, the town of Smeltzer, and then Gospel Swamp for the revival meetings that were held in the marshland where the community college Golden West College can currently be found. Later it became known as Fairview and then Pacific City, as it developed into a tourist destination. In order to secure access to the Pacific Electric Red Car lines that used to criss-cross Los Angeles and ended in Long Beach, Pacific City ceded enormous power to railroad magnate Henry E. Huntington, and thus became a city whose name has been written into corporate sponsorship, and like much of the history of Southern California, boosterism.

An interesting hiccup in the settlement of the district occurred when an encyclopedia company gave away free parcels of land, with the purchase of a whole set for $126, in the Huntington Beach area that it had acquired cheaply. The lucky buyers got more than they had bargained for when oil was discovered in the area, and enormous development of the oil reserves followed. Though many of the old reserves are depleted, and the price of land for housing has pushed many of the rigs off the landscape, oil pumps can still be found to dot the city.

Huntington Beach was primarily agricultural in its early years with crops such as celery and sugar beets. Holly Sugar was a major employer with a large processing plant in the city that was later converted to an oil refinery.

The city's first high school, Huntington Beach High School, located on Main Street, was built in 1906. The school's team, the Oilers, is named after the city's original natural resource.

Meadowlark Airport, a small general aviation airport, existed in Huntington Beach from the 1940s until 1989. 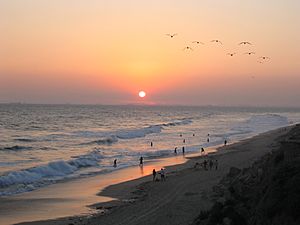 Huntington Beach has a borderline semi-arid/Mediterranean climate (Köppen climate classification BSk/Csb). The climate is generally sunny, dry and cool, although evenings can be excessively damp. In the morning and evening, there are often strong breezes that can reach 15 mph (24 km/h). Ocean water temperatures average 55 °F (13 °C) to 65 °F (18 °C). In the summer, temperatures rarely exceed 85 °F (29 °C). In the winter, temperatures rarely fall below 40 °F (4 °C), even on clear nights. There are about 14 inches (360 mm) of rain, almost all in mid-winter. Frost occurs only rarely on the coldest winter nights. The area is annually affected by a marine layer caused by the cool air of the Pacific Ocean meeting the warm air over the land. This results in overcast and foggy conditions in May and June. 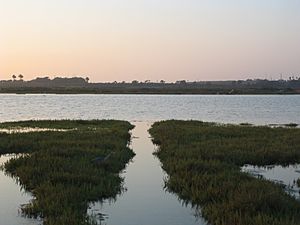 Construction of any kind on the beach is prohibited without a vote of the people, allowing Huntington Beach to retain its natural connection to the ocean rather than having the view obstructed by residential and commercial developments.

Between Downtown Huntington Beach and Huntington Harbour lies a large marshy wetland, much of which is protected within the Bolsa Chica Ecological Reserve. A $110 million restoration of the wetlands was completed in 2006. The Reserve is popular with bird watchers and photographers.

South of Downtown, the Talbert, Brookhurst and Magnolia Marshes, which lie across the street from Huntington State Beach, had restoration completed in 2010. 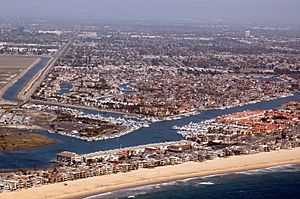 Huntington Harbour from the air

The harbor entrance for Anaheim Bay is sometimes restricted by the United States Navy, which loads ships with munitions at the Seal Beach Naval Weapons Station to the north of the main channel.

There were 73,657 households out of which 29.0% had children under the age of 18 living with them, 50.7% were married couples living together, 9.6% had a female householder with no husband present, and 35.2% were non-families. 24.3% of all households were made up of individuals and 6.7% had someone living alone who was 65 years of age or older. The average household size was 2.56 and the average family size was 3.08.

Many of the events at Huntington Beach are focused around the beach during the summer. The U.S. Open of Surfing is featured on the south side of the pier. Huntington Beach is a stop on the AVP beach volleyball tour. A biathlon (swim/run) hosted by the Bolsa Chica & Huntington State Beach Lifeguards takes place in July, early at dawn. The race begins at the Santa Ana River Jetties and ends at Warner Avenue, Bolsa Chica State Beach. Huntington Beach Junior Lifeguard day camps are held which teaches pre-adolescents and adolescents ocean swimming, running, and first-aid medical knowledge.

In addition to the beach-focused events, the Fourth of July parade has been held since 1904. The SoCal Independent Film Festival takes place every September.

During the winter, the annual Cruise of Lights Boat Tour is held in the Huntington Harbour neighborhood. This is a parade of colorful lighted boats as well as boat tours to view the decorated homes. In February of each year since 1996, the Surf City USA marathon is held with over 20,000 runners. The annual Kite Festival is held just north of the pier in late February.

Huntington Beach hosts car shows such as the Beachcruiser Meet and a Concours d'Elegance. The Beachcruiser Meet is held in March, attracting over 250 classic cars displayed along Main Street and the Pier parking lot. A Concours d'Elegance is held at Central Park in June and benefits the public library. An informal "Donut Derelicts" car show occurs every Saturday morning at the intersection of Adams and Magnolia Street.

Huntington Beach has a large central park, known as Huntington Central Park. Central Park is located between Gothard and Edwards Streets to the east and west, and Slater and Ellis Avenues to the north and south. Dedicated on June 15, 1974, Huntington Central Park is the largest city owned park in Orange County with nearly 350 acres (140 ha). The park is vegetated with xeric (low water use) plants, and inhabited by native wildlife. Thick forests encircling the park are supplemented with Australian trees, particularly Blue Gum Eucalyptus, a high water use plant. 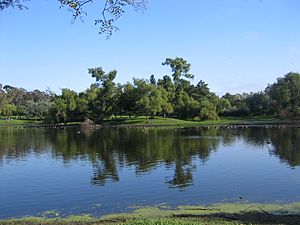 The Huntington Beach Public Library is located in Central Park in a notable building designed by Richard Neutra and Dion Neutra. It houses almost a half-million volumes, as well as a theater, gift shop and fountains. The library was founded as a Carnegie library in 1914, and has been continuously supported by the city and local activists, with new buildings and active branches at Banning, Oak View, Main Street, and Graham. The library has significant local historical materials and has a special genealogical reference collection. It is independent of the state and county library systems.

The park is also home of Huntington Central Park Equestrian Center, a top class boarding facility that also offers horse rentals to the public, with guided trail rides through the park. There is also a "mud park" available for kids. The world's second oldest disc golf course is available in the park, as are two small dining areas, a sports complex for adult use, and the Shipley Nature Center.

The Bolsa Chica Wetlands, contains numerous trails and scenic routes. The wetlands themselves have been connected with the ocean again, in effort to maintain its previous, unaltered conditions. 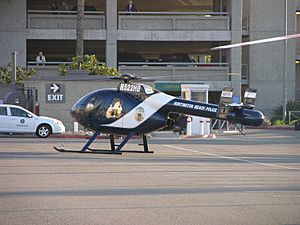 Emergency services are also provided at State Beach locations. Peace Officers and lifeguards can be found at Bolsa Chica and Huntington State Beach. Such services consist of: aquatic rescues, boat rescues, first aid and law enforcement. All services are provided by the State of California, Dept. Parks & Recreation .

In 1926, the Santa Ana River dam failed, and flash-flooded its entire delta. The southern oceanic terminus of this delta is now a settled area of Huntington Beach. The distant dam is still functional, but silting up, which is expected to reduce its storage volume, and therefore its effectiveness at flood-prevention. The flood and dam-endangered areas are protected by a levee, but lenders require expensive flood insurance in the delta. There have been serious discussions to eliminate the need for flood insurance and this requirement has already been waived in some areas and may one day no longer be considered a credible threat.

Since it is a seaside city, Huntington Beach has had tsunami warnings, storm surge (its pier has been rebuilt three times), sewage spills, tornadoes and waterspouts. The cold offshore current prevents hurricanes. The Pier that was rebuilt in the 1990s was engineered to withstand severe storms or earthquakes.

Large fractions of the settled delta are in soil liquefaction zones above known active faults. Most of the local faults are named after city streets.

Many residents (and even city hall) live within sight and sound of active oil extraction and drilling operations. These occasionally spew oil, causing expensive clean-ups. Large parts of the developed land have been contaminated by heavy metals from the water separated from oil.

The local oil has such extreme mercury contamination that metallic mercury is regularly drained from oil pipelines and equipment. Oil operations increase when the price of oil rises. Some oil fields have been approved for development. The worst-polluted areas have been reclaimed as parks. At least one Superfund site, too contaminated to be a park, is at the junction of Magnolia and Hamilton streets, near Edison High School.

All content from Kiddle encyclopedia articles (including the article images and facts) can be freely used under Attribution-ShareAlike license, unless stated otherwise. Cite this article:
Huntington Beach, California Facts for Kids. Kiddle Encyclopedia.