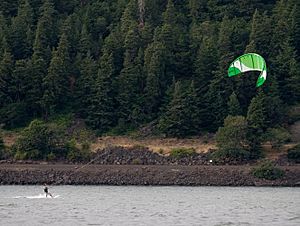 Kite surfing is an action sport combining aspects of wakeboarding, snowboarding, windsurfing, surfing, paragliding, skateboarding and sailing into one extreme sport. A kiteboarder harnesses the power of the wind with a large controllable power kite to be propelled across the water, land, or snow.

Compared to the other sailing sports, kiteboarding is both among the less expensive (including equipment) and the more convenient. It is also unique in that it harvests the wind energy from a much larger atmosphere volume, comparing to sail size.

A kitesurfer or kiteboarder uses a board with or without foot-straps or bindings, combined with the power of a large controllable kite to propel the rider and the board across the water.

In 2006, the number of kitesurfers has been estimated at around 150,000 to 210,000, with 114,465 inflatable kites sold that same year. Various surfing styles have appeared to suit both kitesurfers and conditions, such as waveriding, freestyle, freeride, jumping, and cruising.

All content from Kiddle encyclopedia articles (including the article images and facts) can be freely used under Attribution-ShareAlike license, unless stated otherwise. Cite this article:
Kite surfing Facts for Kids. Kiddle Encyclopedia.