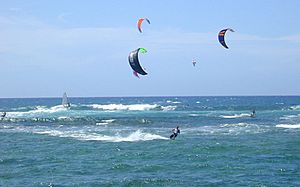 Kitesurfing in strong onshore winds off the north shore of Oʻahu in Hawaii.

A power kite or traction kite is a large kite designed to provide significant pull to the user.

Their two most common forms are the foil, and the leading edge inflatable. There are also other less common types of power kite including rigid-framed kites and soft single skin kites. There are several different control systems used with these kites which have two to five lines and a bar or handles.

Foil kites consist of a number of cells with cloth ribs in each cell. It is the profile of these ribs that gives the kite its aerofoil shape and enable it to generate lift. The most common type is the ram-air foil, where each cell has a gauze-covered opening at the front, meaning air is forced in during flight, giving the kite its stiffness and enabling it to hold its profile. Some ram-air foils are closed-cell, where a one-way valve locks the air inside the cells, giving some increased water relaunch capability.

Leading edge inflatable kites (LEIs) are made of a single skin of fabric with, as the name suggests, an inflated tubular leading edge and inflated ribs. The leading edge and ribs are inflated by the user with a pump prior to launching the kite. The profile of an LEI type kite comes from the inflatable edge and ribs. LEI kites are primarily used for kitesurfing, as they retain their structure when wet and can be easily relaunched from the water after sitting on the surface for an extended period. Conversely, an open-celled foil kite crashed into the sea immediately becomes saturated with water and unflyable.

Power kites are generally used in conjunction with a vehicle or board, such as in:

Power kites can also be used recreationally without a vehicle or board, as in kite jumping or kite man lifting, where a harnessed kite flier is moored to the ground or one or more people to provide tension and lift

Research is also under way in the use of kites to generate electric power to be fed into a power grid. Laddermills are a type of airborne wind turbine. Kites are used to reach high altitude winds such as a jet stream, which are always present, even if ground level winds available to wind turbines are absent.

Kites of related design are used for sailing, including speed sailing. Jacob's Ladder, a kite-powered boat, set the C-Class world sailing speed record with a speed of 25 knots (46 km/h) in 1982, a record that stood for six years. A kiteboard was the first sailing craft to exceed a speed of 50 knots (93 km/h) in October 2008.

The lift generated by the kite and other flying characteristics are affected by the kite's angle of attack, which is set by the bridle; the arrangement of lines which terminate the main kite lines and attach to a number of points across the kite's surface. Power kites having 4 or 5 lines come in two variants, fixed bridle and depowerable.

Fixed bridle kites have a fixed angle of attack which is set by the bridle. Small adjustments may be possible by adjusting the bridle with the kite on the ground, however the angle of attack is not adjustable whilst the kite is airborne. A high angle of attack setting results in more power from the kite, but at the expense of speed and ability to fly close to the wind. A low angle of attack results in less power, but speed is increased and the kite can fly a lot closer to the edge of the wind window. Fixed bridle kites may be used with handles or a bar, with handles typically being preferable for activities such as kite jumping and kite buggying, and a bar being preferable for kite landboarding.

Depowerable kites are used with a control bar and harness system, with the kite's primary power lines attached to the user's harness through a hole in the centre of the bar. The bar has a few inches of travel along the lines, and the lines are configured such that the user may pull the bar towards themselves to increase the kite's angle of attack, increasing the lift and thus the power delivered through the harness whilst the kite is in flight. Kites used for kitesurfing are almost invariably depowerable, and some modern kites such as bow kites allow power to be reduced by almost 100% for increased safety and versatility. 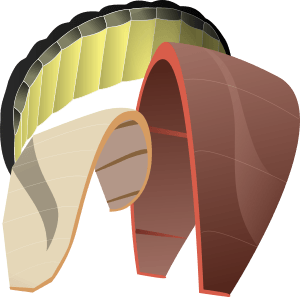 Kite safety systems have become more prevalent in recent years, and today almost all 4 and 5 line kites are used with a safety system designed to remove power from the kite in the event that the user becomes overpowered or loses control of the kite. When flying a fixed bridle kite, one or more straps known as 'kite killers' are attached to the user's wrist(s) by bungee cords. When the handles or bar are released, these straps pull on the kite's brake lines at the trailing edge of the kite, allowing the kite to flap in the wind with no structure.

Depowerable kites have safety systems that work in a similar way, but since the kite is semi-permanently attached to the user's harness, a toggle or handle is used to activate the safety system which releases the bar and power lines from the harness.

Some depowerable kites have a 5th line safety system, the 5th line being redundant during normal use until the safety mechanism is activated. Here, all of the usual four lines are slackened, causing the kite to either fold or roll backwards, and lose its profile to the wind and therefore its power. The kite is left attached to the user by the 5th line to allow retrieval.

All content from Kiddle encyclopedia articles (including the article images and facts) can be freely used under Attribution-ShareAlike license, unless stated otherwise. Cite this article:
Power kite Facts for Kids. Kiddle Encyclopedia.