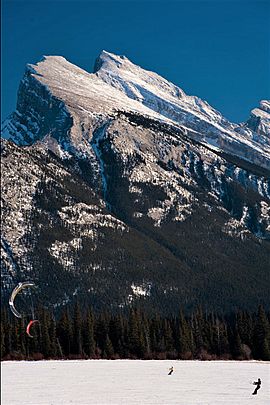 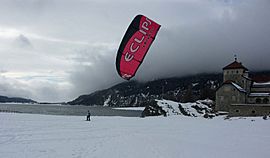 Snowkiters use large kites to travel across snow and jump in the air. 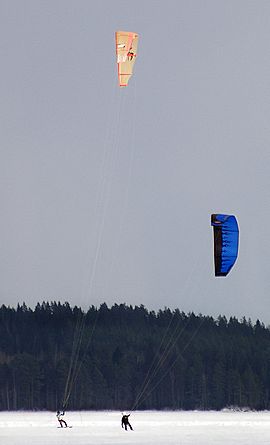 Snowkiting or kite skiing is an outdoor winter sport where people use kite power to glide on snow or ice. The skier uses a kite to give them power over large jumps. The sport is similar to water-based kiteboarding, but with the footwear used in snowboarding or skiing. The principles of using the kite are the same, but in different terrain. In the early days of snowkiting, foil kites were the most common type; nowadays However, since 2013, newly developed racing foil kites seem to dominate speed races and expedition races, like Red Bull Ragnarok (held on the Norwegian Hardangervidda plateau) and the Vake mini-expedition race (held at Norway's most northern Varanger peninsula). Snowkiting differs from other alpine sports in that it is possible for the snowkiter to travel uphill and downhill with any wind direction. Like kiteboarding, snowkiting can be very hazardous and should be learned and practiced with care. Snowkiting is becoming increasingly popular in places often associated with skiing and snowboarding, such as Russia, Canada, Iceland, France, Switzerland, Austria, Norway, Sweden, Finland and the Northern and Central United States. The sport is becoming more diverse as adventurers use kites to travel great distances and sports enthusiasts push the boundaries of freestyle, big air, speed and back country exploration.

Snowkiting is very similar to windsurfing in technique. It is harder to maintain balance than with basic snowboarding, since the hands and arms have to control the kite and thus are not completely available for balance. However, the balance issue can be somewhat offset by the up-and-forward force generated by the kite.

With previous snowboard models, it was necessary to minimize side cuts to avoid inadvertently riding upwind. This happens because in leaning back to be a counterweight against the force of the kite, the heels of the snowkiter naturally dig into the snow, causing the board to turn upwind. Modern reverse camber snowboards have addressed this problem.

There are specialized equipment for snowkiting. They have a radius of 100-150m, skis for snowkiting are 215cm long, snowkiteboards have a length of 200cm. Rotational snowboard bindings that go between the board and traditional boot binding are becoming popular among snow kiters. The rotational binding relieves stress in the ankles and knees often associated with snowkiting.

Kite Boarding is practical on very many areas, as long as there is a significant amount of wind to keep the kite up. It is not always used on slopes, and can in fact be used with no slope, or even an upwards slope, as long as there is enough wind to offset the drag incurred. It can prove more difficult to have any riding time when you go on a steeper slope, as the wind can be blocked and or become turbulent passing over the peak of the hill, causing the kite to behave erratically and even fall or be pushed to the ground.

All content from Kiddle encyclopedia articles (including the article images and facts) can be freely used under Attribution-ShareAlike license, unless stated otherwise. Cite this article:
Snowkiting Facts for Kids. Kiddle Encyclopedia.