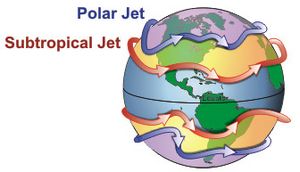 General configuration of the polar and subtropical jet streams

Jet streams are fast flowing, relatively narrow air currents found in the atmosphere at around 12 km above the surface of the Earth, just under the tropopause. They form at the boundaries of adjacent air masses with significant differences in temperature, such as of the polar region and the warmer air to the south.

Because of Earth's rotation the streams flow west to east in both the Northern Hemisphere and the Southern Hemisphere due to the Coriolis effect. The paths of the flows typically show a meandering shape, and these shapes themselves propagate east, at lower speeds than that of the actual wind within the flow.

There are two main jet streams at polar latitudes, one in each hemisphere, and two minor subtropical streams closer to the equator. The wind speeds vary according to the temperature, averaging 55km/h or 35 mph in summer and 120km/h or 75 mph in winter, although speeds of over 400km/h or 250 mph are known. Technically the wind speed has to be higher than 90km/h or 55 mph to be called a jet stream. 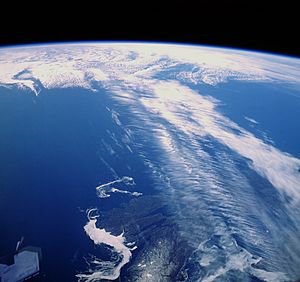 Clouds along a jet stream over Canada

Jet streams can be explained as follows. In general, winds are strongest just under the tropopause (except during tornados, hurricanes or other exceptional situations). If two air masses of different temperatures meet, the resulting pressure difference (which causes wind) is highest at those altitudes. If one of the air masses lies north of the other one, then the wind will not flow directly from the hot to the cold area as one would expect, but is deflected by the Coriolis force and flows along the boundary of the two air masses.

The jet streams were first discovered by the Japanese meteorologist Wasaburo Ooishi in the 1920s by the tracking of weather balloons. It was utilised during World War II by the Japanese military in the fire balloon attacks on the American mainland.

During World War II the American aviator Wiley Post and military pilots flying Boeing B-29 Superfortress bombers at high altitudes found the winds made precision bombing at those heights almost impossible. The theory of the jet streams was explained by Erik Palmén and other members of the Chicago school of meteorologists. The first practical use of jet streams was the Japanese fire balloon attacks on the American mainland later during the World War II.

The location of the jet stream is extremely important for airlines. In the United States and Canada, for example, the time needed to fly east across the continent can be decreased by about 30 minutes if an airplane can fly with the jet stream, or increased by about the same amount if it must fly west against it. On international flights, the difference is even greater, and it is often actually faster and cheaper flying eastbound along the jet stream rather than taking the shorter great circle route between two points.

All content from Kiddle encyclopedia articles (including the article images and facts) can be freely used under Attribution-ShareAlike license, unless stated otherwise. Cite this article:
Jet stream Facts for Kids. Kiddle Encyclopedia.