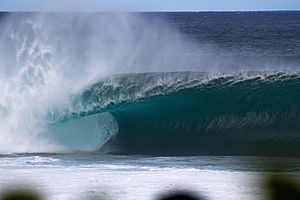 The Banzai Pipeline, or simply Pipeline or Pipe, is a surf reef break located in Hawaii, off Ehukai Beach Park in Pupukea on O'ahu's North Shore. A reef break is an area in the ocean where waves start to break once they reach the shallows of a reef. Pipeline is known for huge waves that break in shallow water just above a sharp and cavernous reef, forming large, hollow, thick curls of water that surfers can tube ride. There are three reefs at Pipeline in progressively deeper water farther out to sea that activate according to the increasing size of approaching ocean swells.

The location's compound name combines the name of the surf break (Pipeline) with the name of the beach fronting it (Banzai Beach). It got its name in December 1961, when surfing legend producer Bruce Brown was driving up north with Californians Phil Edwards and Mike Diffenderfer. Bruce stopped at the then-unnamed site to film Phil catching several waves. At the time, there was a construction project on an underground pipeline on adjacent Kamehameha Highway, and Mike made the suggestion to name the break "Pipeline". The name was first used in Bruce Brown's movie Surfing Hollow Days. It also lent its name to a 1963 hit Pipeline by surf music rockers The Chantays.

Specifics of the break

The reef at Pipe is a flat tabletop reef, with several caverns on the inside, creating a giant air bubble that pops on the front of the wave when the wave lurches upwards just before breaking. There are also several jagged, underwater lava spires that can injure fallen surfers. Sand can accumulate on the reef at Pipeline, and that can cause waves to "close out" (meaning the hollow tube of the wave collapses all at once and thus is impossible to surf). A strong swell (a formation of long-wavelength surface waves) from the west clears out the sand in the reef, and after that, a strong north swell can give rise to the best waves.

There are four waves associated with Pipeline. The left (which means the wave breaks from left to right from the perspective of a watcher on shore) known as Pipeline (a.k.a. First Reef) is the most commonly surfed and photographed. When the reef is hit by a north swell, the peak (the highest tipping-point of the wave where it begins to curl) becomes an A-frame shaped wave, with Pipe closing out a bit and peeling off left, and the equally famous Backdoor Pipeline peeling away to the right at the same time. As the size at Pipe increases, over 12 feet usually, Second Reef on the outside (further out into the deeper ocean waters) starts breaking, with longer walls (the unbroken face of the wave that the surfer slides across), and more size. At an extreme size, an area called Third Reef even further outside starts to break with giant waves.

Numerous surfers and photographers have been killed at Pipeline, including Jon Mozo and Tahitian Malik Joyeux, who was famous for his heavy charging (gutsy surfing) at Teahupo'o. Many people have died or been seriously injured at Pipeline. Pipeline has been called one of the world's deadliest waves. Its average wave is 9 feet (3 m), but it can be as tall as 20 feet. Especially perilous are sections of shallow reef known as "Off the Wall" and "Backdoor".

The top surfing competitions at this spot include the Pipe Masters (board surfing), the Volcom Pipe Pro, the IBA Pipeline Pro (bodyboarding), and the Pipeline Bodysurfing Classic. Surfers can also submit videos to Surfline's Wave of the Winter competition. The competition focuses on beaches on Oahu's north shore, including Pipeline.

All content from Kiddle encyclopedia articles (including the article images and facts) can be freely used under Attribution-ShareAlike license, unless stated otherwise. Cite this article:
Banzai Pipeline Facts for Kids. Kiddle Encyclopedia.