La Quinta (Spanish for "The Fifth") is a desert resort city in Riverside County, California, United States. Located between Indian Wells and Indio, it is one of the nine cities of the Coachella Valley. The population was 37,467 at the 2010 census, up from 23,694 at the 2000 census. The Robb Report credits La Quinta as the leading golf destination in the US. Among those destinations is the La Quinta Resort and Club, a resort dating to 1926, where director Frank Capra wrote the screenplay for Lost Horizon. The Tom Fazio-designed golf course at The Quarry at La Quinta is ranked among the top 100 golf courses in the United States. In January 2008, the Arnold Palmer Classic Course at the city's SilverRock Golf Resort became one of the four host golf courses for the annual Bob Hope Chrysler Classic PGA golf tournament.

In 1926, Walter Morgan established the La Quinta Resort at the northern section of Marshall Cove as a type of secluded hideaway for nearby Hollywood's celebrities and socialites. The Resort was the site for the Coachella Valley's first golf course, coinciding with the construction and pavement of State Route 111 in the 1930s. Further expansion of Washington Street in the 1950s and 1960s connected La Quinta with US Highways 60 and 99 (became Interstate 10 in the 1970s).

As nearby desert cities grew to capacity, La Quinta's growth rose dramatically by the mid-1980s, which led to its incorporation as a city in Riverside County in 1982. In the 1980 census, La Quinta had 4,200 residents, then increased to 11,215 by 1990 in the city's early phases of residential area growth. Once predominantly a part-time community until the early-1990s, more full-time residents live in La Quinta to make it possibly more populous than Palm Springs by 2006, according to some demographers.

The landscape was formerly a lake shore of prehistoric Lake Cahuilla which evaporated about 5,000 years ago. 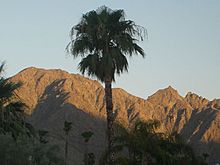 The Santa Rosa Mountains at dusk.

The most prominent feature of the La Quinta area is its Santa Rosa Mountains. Visitors to Disney California Adventure Park in Anaheim, California and EPCOT at the Walt Disney World Resort in Bay Lake, Florida are treated to a brief glimpse of the foothills in one of the park's attractions: Soarin' Over California. The "Palm Springs" segment of Soarin' Over California was actually shot at the world-famous PGA West golf complex in La Quinta. The Santa Rosa Mountains (California) are nestled against the golf course and can be seen easily in the segment.

The area is very close to the earthquake-causing San Andreas Fault, with some companies offering jeep tours to the fault line.

The estimated 2012 population is 38,075, similar to Palm Springs. La Quinta grew at a higher rate than most other cities in California during the 1990s and 2000s.

La Quinta is in the Coachella Valley and is relatively close to all major cities in that valley, including:

As of January 1, 2012, the California Department of Finance Demographic Research Unit estimates the City of La Quinta's population to be 38,075.

According to the 2010 United States Census, La Quinta had a median household income of $72,099, with 8.0% of the population living below the federal poverty line.

There were 8,445 households, out of which 38.1% had children under the age of 18 living with them, 64.6% were married couples living together, 9.2% had a female householder with no husband present, and 22.4% were non-families. 17.0% of all households were made up of individuals, and 6.6% had someone living alone who was 65 years of age or older. The average household size was 2.8 and the average family size was 3.2, above national average of 2.4 according to the 2000 United States Census.

La Quinta has developed a culturally diverse community, as large ancestry groups include Mexicans (the largest) and Mexican Americans who frequently came to the Palm Springs area/Coachella Valley to find available employment in the 1990s and 2000s. Others, in alphabetical order, include: Armenians, Bosnians, British, French, Germans, Italians, Poles and Jews of multiple nationalities.

Temporary population known as "snowbird" from Coastal California urban areas, the Pacific Northwest and/or Canada increase the local population by 50–90% in the winter months from November to April. A large percentage of seasonal residents are senior citizens and RV or mobile home parks are scattered throughout "East Valley" – the eastern half of the Coachella Valley.

Like the rest of the "East Valley" including nearby communities of Indio, Coachella, and unincorporated communities of Bermuda Dunes and Vista Santa Rosa, there is a burgeoning Latino (especially Mexican-American and Central American nationalities) as well an enlargened African American and Asian American (i.e. east Asians) population belonging to the middle and upper-middle class.

According to the United States Hispanic Chamber of Commerce, estimates placed Latinos at half (about 50% to 60%) of the local population, Blacks at near or over 10% and Asians at 10–15% of the city population as of the year 2010. Most of the minorities are recently moved-in families sought starter homes and/or relocated from urban centers of Southern California during the 1990s and 2000s, and from families of two or more races (to represent multiracial identity).

La Quinta is located south of Interstate 10 and is served by California State Route 111, the main arterial route through the Coachella Valley.

The city is part of the SunBus line, which services much of the Coachella Valley.

Jacqueline Cochran Regional Airport, in the community of Thermal, is located 10 miles (16 km) to the east. The Palm Springs International Airport (PSP) is located 20 miles (32 km) northwest of the city.

The city of La Quinta has 20 Parks.

Lake Cahuilla Regional Park is a Riverside county park, and the Santa Rosa and San Jacinto Mountains National Monument is under the US Department of the Interior / National Park Service.

The city enjoys a healthy tourism industry, especially during the cooler winter months in which "snowbird" tourists arrive. The most prominent industry is golfing with more than twenty golf courses, including the world-famous PGA West, which has hosted prestigious tournaments such as The Skins Game, Bob Hope Chrysler Classic, The Grand Slam of Golf, The Legends of Golf, as well as the PGA Tour Qualifying School. La Quinta has increased the number of retail shopping centers, both discount and high-end retailers brought millions of revenue dollars to the city, and the city council hopes for La Quinta to share a reputation for shoppers like Palm Desert (El Paseo) and Palm Springs (the Village and Palm Canyon) by the end of the decade.

In addition to standard service industries, La Quinta is the site of the first Wal-Mart Supercenter in California. Moreover, many residents work for the tourist industries in hotels, resorts, golf courses, and nearby Vegas-style casinos, such as: Spa Resort Casino, Agua Caliente Casino, Spotlight 29, Fantasy Springs and Augustine Casino. There are many service industry jobs related to the construction, hotel, landscaping, and retail industries. La Quinta has sought to bring in high-paying professional businesses to the city and has benefited from neighboring cities' growth (Indio, Palm Desert and Palm Springs). The city's downtown commercial district is officially known as "The Village." The Village District includes private commercial developments such as "Old Town" and "Plaza Calle Tampico," and contains many professional offices, the City museum, small tourist-oriented shops and boutiques, and several restaurants.

Old Town La Quinta is a commercial real estate development that was founded and developed by Wells Marvin. It consists of 30 cafes, shops, boutiques, salons, and services as well as 20 office spaces on the 2nd story above the businesses. The town hosts Art on Main St. and La Quinta's Farmers Market.

In 2001 Wells purchased six acres of land and decided to create a Main Street, inspired by Spanish Colonial architecture in Santa Barbara, Carmel as well as small European towns he had lived in as a child. Old Town opened in 2003 and is situated on Calle Tampico, Desert Club Drive, Avanidas Bermudas, and Calle La Fonda.

According to La Quinta's 2020 Comprehensive Annual Financial Report, the top employers in the city were:

The city has a public library that began operations in 2005.

The city has been home to a number of celebrity residents, including the late Merv Griffin. Griffin was the driving force behind the annual La Quinta Arts Festival, one of the country's leading plein air art shows, and was instrumental in the development of Griffin Ranch, La Quinta's first equestrian-oriented resort residential neighborhood.

Colonel Mitchell Paige is a World War II Medal of Honor veteran who resided in nearby Palm Desert and had a middle school in La Quinta named for him.

Scott Burcham, a baseball player in the Colorado Rockies organization, was born and grew up in La Quinta.

The band Yawning Man formed there.

Singer and TV personality Andy Williams resided in La Quinta with his second wife Debbie in addition to owning a house in Branson, Missouri, where his Moon River theatre was located.

Scientology founder L. Ron Hubbard lived in secret on a ranch in La Quinta from 1978 to the early 1980s.

All content from Kiddle encyclopedia articles (including the article images and facts) can be freely used under Attribution-ShareAlike license, unless stated otherwise. Cite this article:
La Quinta, California Facts for Kids. Kiddle Encyclopedia.