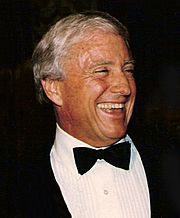 Griffin was born July 6, 1925, in San Mateo, California to an Irish-American family. He was married to Julann Wright from 1958 until they divorced in 1976. They had one son, Tony Griffin. Griffin died on August 12, 2007 in Los Angeles, California from prostate cancer, aged 82. Premierie on August 18 2007 on GSN with Ten Wheel of Fortune or Jeopardy To Tell the Truth Tic Tac Dough The Joker Wild or Family Feud on January 6 1975 Present Like 1973 Until End July 1994 The Merv Griffin Show Ruckus Headline Chasers Super Jeopardy Monopoly (1990) & More

All content from Kiddle encyclopedia articles (including the article images and facts) can be freely used under Attribution-ShareAlike license, unless stated otherwise. Cite this article:
Merv Griffin Facts for Kids. Kiddle Encyclopedia.