The Beverly Hilton facts for kids 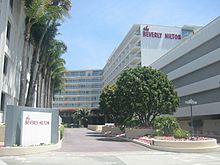 Entrance to the Beverly Hilton Hotel

The Beverly Hilton is a hotel located on an 8.9-acre (3.6 ha) property at the intersection of Wilshire and Santa Monica boulevards in Beverly Hills, California. The Beverly Hilton has hosted many awards shows, charity benefits, and entertainment and motion picture industry events, and is particularly known as the venue of the annual Golden Globe Awards ceremony. 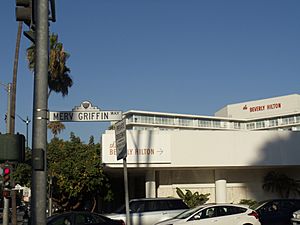 Merv Griffin Way with The Beverly Hilton in the background, in Beverly Hills, California.

Conrad Hilton opened the Beverly Hilton in 1955. Architect Welton Becket designed the hotel as a showpiece with 582 rooms.

Since 1961, the hotel's International Ballroom has hosted the Golden Globe Awards ceremony, presented annually by the Hollywood Foreign Press Association.

In 1975, 50% of the property was sold to Prudential Insurance Company forming a partnership with the Hilton Hotels Corporation. The partnership sold the hotel to entertainer and businessman Merv Griffin for $100.2 million in December 1987.

The Beverly Hilton had completed a $35 million renovation prior to Griffin's purchase. The hotel was Griffin's second choice, as he had expressed an interest in buying the 260-room Beverly Hills Hotel, which had recently been sold to Sultan Hassanal Bolkiah of Brunei for $200 million by a group headed by Denver oilman Marvin Davis.

Griffin owned the hotel from 1987 to 2003, during which time its reputation faded as maintenance was deferred and competition increased. In 2003, Griffin sold the Beverly Hilton for $130 million to Beny Alagem, co-founder of Packard Bell Electronics, through his company Oasis West Realty. Commemorating its 50th anniversary, an ambitious $80 million renovation by architecture firm Gensler began in conjunction with Hilton Hotels, which has managed the property since it opened.

The renovation reduced the number of rooms to 570, which feature 42-inch plasma high-definition televisions and Bose Wave radios. The rooms also have ample work spaces, reflecting a change at the hotel, which long catered mostly to leisure travelers, into a property where business travelers constitute 80 percent of the clientele. The meeting spaces and the International Ballroom—where the Golden Globes ceremony is held—were also renovated.

On February 11, 2012, singer Whitney Houston died in Suite 434. The room number was retired and the room repurposed.

In April 2006, owners unveiled plans for a $500-million expansion to the Beverly Hilton property. The plans require an amendment to the Beverly Hills general plan's three-story height limit in order to build two 13-story condominium towers and a 15-story condo hotel, where rooms would be rented to guests when their owners are away. One intent of the owner's plan was "to position the upgraded hotel as a less-expensive 4½-star alternative to nearby five-star rivals such as the Peninsula."

The Beverly Hills City Council approved the $500 million project by a 3-2 vote. Local resident opponents led by a group called Citizens Right to Decide Committee gathered enough signatures to place the referendum (Measure H) on November 4, 2008, ballot with the argument that "It's Just Too Big." Measure H authorized the Beverly Hills City Council to amend the city's general plan to allow a "luxury hotel, condominiums and open space" to be built on the site of the Beverly Hilton Hotel. Resolution No. 08-R-12601, “Resolution of the Council of the City of Beverly Hills amending the General Plan to enable the revitalization of the Beverly Hilton Hotel site with a new Luxury Hotel, Condominiums, and Open Space,” Los Angeles County election officials reported a week after the vote that local Measure H was losing by 68 votes, with provisional ballots yet to be counted. On December 2, 2008, Proposal H passed by 129 votes with over 15,000 cast.

Measure HH (or the Hilton Condominium Tower initiative) was a November 2016 ballot initiative to allow Oasis West Realty to build a 37-story condominium tower on the Beverly Hilton site. The initiative was rejected by Beverly Hills voters, with nearly 56% voting no.

All content from Kiddle encyclopedia articles (including the article images and facts) can be freely used under Attribution-ShareAlike license, unless stated otherwise. Cite this article:
The Beverly Hilton Facts for Kids. Kiddle Encyclopedia.