During the fourth season of Ellen in 1997, DeGeneres came out publicly as a lesbian in an appearance on The Oprah Winfrey Show. Since 2004, DeGeneres has been in a relationship with Australian actress Portia de Rossi. They were married on August 16, 2008.

DeGeneres was born and raised in Metairie, Louisiana. She is the daughter of Elizabeth Jane "Betty" Pfeffer DeGeneres, a speech therapist, and Elliott Everett DeGeneres, an insurance agent. She has one brother, Vance, a musician and producer. She is of French, English, German, and Irish ancestry. She was raised as a Christian Scientist until age 13. In 1973, her parents filed for separation and were divorced the following year. Shortly after, Ellen's mother married Roy Gruessendorf, a salesman. Betty Jane and Ellen moved with Gruessendorf from the New Orleans area to Atlanta, Texas. Vance stayed with his father.

DeGeneres graduated from Atlanta High School in May 1976, after completing her first years of high school at Grace King High School in Metairie, Louisiana. She moved back to New Orleans to attend the University of New Orleans, where she majored in communication studies. After one semester, she left school to do clerical work in a law firm with a cousin, Laura Gillen. She also held a job selling clothes at the chain store the Merry-Go-Round at the Lakeside Shopping Center. Her early jobs included working at J. C. Penney, being a waitress at TGI Friday's and another restaurant, a house painter, a hostess, and a bartender. She relates much of her childhood and career experiences in her comedic work.

On a February 9, 2011, episode of The Ellen DeGeneres Show, DeGeneres told her studio audience via a letter from the New England Historic Genealogical Society that she is Catherine, Duchess of Cambridge's 15th cousin via their shared common ancestor Thomas Fairfax. Madonna is DeGeneres' eleventh cousin.

In summer 2020, DeGeneres faced considerable controversy after it came out that her show was being investigated for being a hostile workplace and allegations were made that she instigated the abuse, racism and sexual harassment against her staff.

In 2007, Forbes estimated DeGeneres's net worth at US$65 million.

She is a fan of the National Football League, and has shown particular support for the New Orleans Saints and the Green Bay Packers. In 2011, she attended a Saints practice dressed as Packers Hall of Famer Don Hutson.

In November 2011, then-Secretary of State Hillary Clinton named her a Special Envoy for Global AIDS Awareness.

DeGeneres' selfie, which she took at the 86th Academy Awards in 2014 with actors such as Brad Pitt, Angelina Jolie, Bradley Cooper, Jared Leto, and Lupita Nyong'o, became the most retweeted image ever on Twitter, with over 3 million retweets. 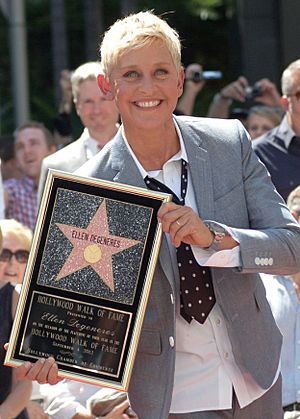 Mark Twain Prize for American Humor by the John F. Kennedy Center for the Performing Arts

All content from Kiddle encyclopedia articles (including the article images and facts) can be freely used under Attribution-ShareAlike license, unless stated otherwise. Cite this article:
Ellen DeGeneres Facts for Kids. Kiddle Encyclopedia.