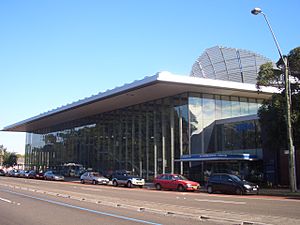 Anzac Parade is a major road in the south-eastern suburbs of Sydney, Australia. It included part of the marathon during the 2000 Summer Olympics, and the blue line denoting the marathon's path still exists today.

Anzac Parade starts at Driver's Triangle, a small park at the intersection of Moore Park Road and South Dowling Street at Moore Park. It is a southward extension of Flinders Street, on the border of Surry Hills and Paddington. At this intersection there is also an entrance to the Eastern Distributor. The street received its name in memory of members of the First Australian Imperial Force (later to become known as ANZACs) who marched down the street from their barracks (now a heritage listed part of the University of New South Wales) to Sydney Harbour, where they were transported to Europe during World War I.

Anzac Parade passes south through the suburbs of Moore Park, Kensington, Kingsford, Maroubra, Matraville, Malabar, Chifley and Little Bay before ending at a loop at La Perouse. It was designated State Route 70 from 1974 until 2004.

Major landmarks along Anzac Parade include the University of New South Wales and the National Institute of Dramatic Art (known as NIDA), where a number of well-known actors (including Mel Gibson, Cate Blanchett and Judy Davis) received their training.

In February 2015, the Albert Cotter Bridge across Anzac Parade opened. This pedestrian and cycle bridge was built to improve access to events at the Sydney Cricket Ground and Sydney Football Stadium.

The road is served by Transdev John Holland bus services, to the city, Railway Square, Bondi Junction, Maroubra, Westfield Eastgardens, Coogee, Little Bay and La Perouse The road also contains a bus-only lane prior to its intersection with Alison Road, as well as a separate parallel bus corridor accompanying its route through Moore Park. It is one of the busiest road based public transport routes in Sydney. This is due to the lack of rail infrastructure in the area and the Sydney Football Stadium, Sydney Cricket Ground, Randwick Racecourse and the University of New South Wales, Long Bay Gaol and NIDA all being located on this road.

in 2015, construction of the CBD and South East Light Rail commenced. Running from Circular Quay down George Street to Central station, it then crosses Moore Park and gles down Anzac Parade. South of Moore Park the line spits into two branches – one continuing down Anzac Parade to Kingsford, and the second heading to Randwick via Alison Road. In April 2016, work began on a temporary six-lane diversion of Anzac Parade between the Albert Cotter Bridge and Lang Road while a tunnel was built below the road. Traffic was directed on to the temporary road from mid-2016. The original alignment was reinstated in April 2017.

South of Kingsford, Anzac Parade is a divided road with a wide grassy median strip. This median strip was formerly used by a tram service. The line was closed in 1961, when the route was replaced by buses.

All content from Kiddle encyclopedia articles (including the article images and facts) can be freely used under Attribution-ShareAlike license, unless stated otherwise. Cite this article:
Anzac Parade, Sydney Facts for Kids. Kiddle Encyclopedia.