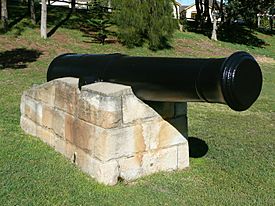 Chifley is a suburb in south-eastern Sydney, in the state of New South Wales, Australia. Chifley is 13 km south-east of the Sydney central business district and is part of the City of Randwick. The postcode is 2036. Chifley is surrounded by the suburbs of Matraville, Malabar, Little Bay and Phillip Bay.

The first house built in the Chifley area was Bunnerong House, which was built in 1825. Most land in that area was owned by the Crown; during the Depression of the 1930s, land was leased to people who built homes in the area gradually, over a drawn-out period of time. Chifley was named after Ben Chifley (1885–1951), Australia's Labor Prime Minister at the end of World War II. Randwick Council made the area, which had been part of southern Matraville, a separate suburb in 1964.

A large public housing complex was established in the area the 1960s. It featured a number of four- and five-storey buildings, plus some smaller buildings containing bedsit-style accommodation, in which lounge-room and bedroom are combined in one room.

Chifley today is predominantly residential. Its low to medium-density housing has attracted a larger proportion of families with children than many other suburbs in the City of Randwick. In recent years, much of the original housing stock has been demolished and replaced by larger and taller family homes. There are also a number of townhouses which fill up the streets of Chifley.

The western edge of Chifley contains a small remnant of Eastern Suburbs Banksia Scrub, which was once the major flora habitat in this coastal region of Sydney. Efforts are being made to remediate and preserve this area.

All content from Kiddle encyclopedia articles (including the article images and facts) can be freely used under Attribution-ShareAlike license, unless stated otherwise. Cite this article:
Chifley, New South Wales Facts for Kids. Kiddle Encyclopedia.