The Australian and New Zealand Army Corps (ANZAC) was a First World War army corps of the Mediterranean Expeditionary Force. It was formed in Egypt in December 1914, and operated during the Gallipoli campaign. General William Birdwood commanded the corps, which primarily consisted of troops from the First Australian Imperial Force and 1st New Zealand Expeditionary Force, although there were also British and Indian units attached at times throughout the campaign. The corps disbanded in 1916, following the Allied evacuation of the Gallipoli peninsula and the formation of I ANZAC Corps and II ANZAC Corps. The corps was reestablished, briefly, in the Second World War during the Battle of Greece in 1941. 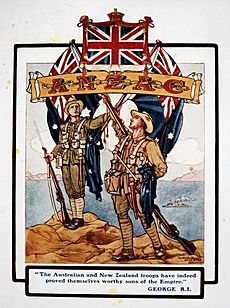 Popular illustration of Anzac troops after the fighting at Gallipoli

Plans for the formation began in November 1914 while the first contingent of Australian and New Zealand troops were still in convoy bound for, as they thought, Europe. However, following the experiences of the Canadian Expeditionary Force encamped on Salisbury Plain, where there was a shortage of accommodation and equipment, it was decided not to subject the Australians and New Zealanders to the English winter, and so they were diverted to Egypt for training before moving on to the Western Front in France. The British Secretary of State for War, Horatio Kitchener, appointed General William Birdwood, an officer of the British Indian Army, to the command of the corps and he furnished most of the corps staff from the Indian Army as well. Birdwood arrived in Cairo on 21 December 1914 to assume command of the corps.

It was originally intended to name the corps the Australasian Army Corps, this title being used in the unit diary in line with the common practice of the time which often saw New Zealanders and Australians compete together as Australasia in sporting events. However, complaints from New Zealand recruits led to adoption of the name Australian and New Zealand Army Corps. The administration clerks found the title too cumbersome so quickly adopted the abbreviation A. & N.Z.A.C. or simply ANZAC. Shortly afterwards it was officially adopted as the codename for the corps, but it did not enter common usage amongst the troops until after the Gallipoli landings.

Despite being synonymous with Australia and New Zealand, ANZAC was a multi-national body: in addition to the many British officers in the corps and division staffs, the Australian and New Zealand Army Corps contained, at various points, the 7th Brigade of the Indian Mountain Artillery, Ceylon Planters Rifle Corps troops, the Zion Mule Corps, several battalions from the Royal Naval Division, the British 13th (Western) Division, one brigade of the British 10th (Irish) Division and the 29th Indian Brigade.

Following the evacuation of Gallipoli in December 1915, the Australian and New Zealand units reassembled in Egypt. The New Zealand contingent expanded to form their own division; the New Zealand Division. The First Australian Imperial Force underwent a major reorganisation resulting in the formation of two new divisions; the 4th and 5th divisions. (The Australian 3rd Division was forming in Australia and would be sent directly to England and then to France.) These divisions were reformed into two corps: I ANZAC Corps and II ANZAC Corps. I ANZAC Corps, under the command of General Birdwood, departed for France in early 1916. II ANZAC Corps, commanded by Lieutenant General Alexander Godley, followed soon after.

In January 1916, the 4th (ANZAC) Battalion, Imperial Camel Corps, was formed with Australian and New Zealand troops. The 1st and 3rd Battalions were Australian, while the 2nd Battalion was British. Then in March 1916, the ANZAC Mounted Division with three Australian and one New Zealand brigade, was formed for service in Egypt and Palestine. There was also the 1st (ANZAC) Wireless Signal Squadron, which served with the British expeditionary force in Mesopotamia in 1916–1917.

Monument in Sfakia commemorating the evacuation of British and ANZAC forces from Crete in late May 1941.

During World War II, the Australian I Corps HQ moved to Greece in April 1941. As the corps also controlled the New Zealand 2nd Division (along with Greek and British formations), it was officially renamed ANZAC Corps in April. The Battle of Greece was over in weeks and the corps HQ left Greece on 23–24 April, with the name ANZAC Corps no longer being used.

Some troops evacuated to Alexandria, but the majority were sent to Crete to reinforce its garrison against an expected air and sea German invasion. Australians and New Zealanders were respectively deployed around the cities of Rethymno and Chania in western Crete with a smaller Australian force being positioned in Heraklion. The invasion began the morning of 20 May and, after the fierce Battle of Crete, which lasted ten days, Crete fell to the Germans. Most of the defenders of Chania withdrew across the island to the south coast and were evacuated by the Royal Navy from Sfakia. Many others evaded capture for several months, hiding in the mountains with generous assistance from the local Cretan population. Others who were captured and transported to Axis POW camps in mainland Europe were able to escape en route via Yugoslavia. Those who escaped found refuge with Chetniks and Yugoslav Partisans until they were either repatriated or recaptured by Axis forces.

During the Vietnam War, two companies from the Royal New Zealand Infantry Regiment were integrated into Royal Australian Regiment battalions. These integrated battalions had the suffix (ANZAC) added to their name (for example, 4 RAR became the 4RAR/NZ (ANZAC) Battalion). An ANZAC battalion served as one of the infantry battalions of the 1st Australian Task Force (1 ATF) from early March 1968 until its withdrawal in December 1971. Due to the rotation of forces there were a total of five combined battalions of this period.

The ANZAC Battle Group was the official designation of Australian and New Zealand units deployed to Timor Leste as part of Operation Astute. The battle group was established in September 2006.

All content from Kiddle encyclopedia articles (including the article images and facts) can be freely used under Attribution-ShareAlike license, unless stated otherwise. Cite this article:
Australian and New Zealand Army Corps Facts for Kids. Kiddle Encyclopedia.