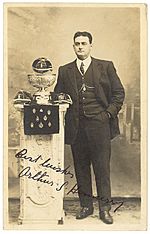 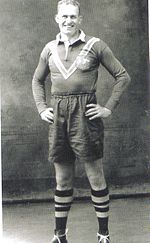 The South Sydney Rabbitohs are a professional Australian rugby league team based in Redfern, a suburb of inner-southern Sydney, New South Wales. They participate in the National Rugby League (NRL) premiership and are one of nine existing teams from the state capital. They are often called Souths and The Bunnies.

The club was formed in 1908 as one of the founding members of the New South Wales Rugby Football League, making them one of Australia's oldest rugby league teams. The Rabbitohs were formed, under their original 1908 articles of association with the NSWRL competition, to represent the Sydney municipalities of Redfern, Alexandria, Zetland, Waterloo, Mascot and Botany. They are one of only two foundation clubs still present in the NRL, the other being the Sydney Roosters. The South Sydney District Rugby League Football Club is currently a subsidiary company 75% owned by Blackcourt League Investments which is, in turn, 50% owned by the actor Russell Crowe and 50% owned by James Packer's Consolidated Press Holdings; the other 25% is owned by the financial Members of the club.

The Rabbitohs' traditional heartland covers the once typically working-class suburbs of inner-south Sydney now generally occupied by factories. The club is based in Redfern, where the club's administration and training facilities are located, however they have long held a wide supporter base spread all over New South Wales. The team's home ground is currently Stadium Australia in Sydney Olympic Park. In the New South Wales Rugby League (1908–1994), Australian Rugby League (1995–1997), and National Rugby League (1998-1999, 2002–present) competitions South Sydney are the most successful professional team in the history of Australian rugby league in terms of total championships won, having claimed 21 first grade premierships. In addition to winning the most premierships, the Rabbitohs also hold the distinction of being the only club to win a premiership in their inaugural season.

All content from Kiddle encyclopedia articles (including the article images and facts) can be freely used under Attribution-ShareAlike license, unless stated otherwise. Cite this article:
South Sydney Rabbitohs Facts for Kids. Kiddle Encyclopedia.