The total catchment area of the river is approximately 21,624 square kilometres (8,349 sq mi) and the area is generally administered by the Hawkesbury–Nepean Catchment Management Authority.

The land adjacent to the Hawkesbury River was occupied by Aboriginal peoples, the Darkinjung, Darug, Eora, and Kuringgai. They used the river as a source of food and a place for trade. 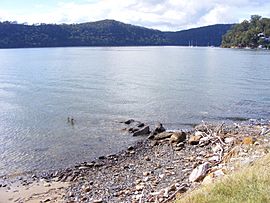 Looking north-east across the Hawkesbury River, with Dangar Island to the right of the image. 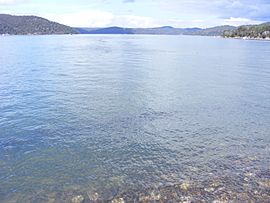 Looking south-east across the Hawkesbury River, from near Brooklyn.

The headwaters of the Hawkesbury River, the Avon River, the Cataract River, and the Cordeaux River, rise only a few kilometres from the sea, about 80 kilometres (50 mi) south of Sydney. These streams start on the inland-facing slopes of the plateau which forms the escarpment behind Wollongong. Flowing north-west, away from the sea, these streams combine to form the Nepean River, and flow north past the towns of Camden and Penrith. Near Penrith, the Warragamba River emerges from its canyon through the Blue Mountains and joins the Nepean. The Warragamba, formed by the joining of the Wollondilly River, the Nattai River, the Kowmung River and Coxs River drains a broad region of New South Wales on the eastern side of the Great Dividing Range. The other principal component of the upper Hawkesbury river system, the Grose River, rises in the area of Mount Victoria in the Blue Mountains.

Once formed, the Hawkesbury River proper flows generally northwards, albeit with a significant number of meanders. Initially the river passes the towns of Richmond and Windsor, which are the largest settlements on the river. At Windsor, the river is joined by South Creek, which drains much of the urban runoff in Sydney's western suburbs that does not fall into the Parramatta River catchment. As it flows north, it enters a more rural area, with only small settlements on the river. On this stretch it passes Sackville and Lower Portland, where it is joined by the Colo River. The Colo River and its tributaries drain the northern section of the Blue Mountains.

From Lower Portland, the Hawkesbury River continues flowing northwards to the small community of Wisemans Ferry where it is joined by the Macdonald River. Here its course turns eastwards and the surrounding landscape gradually becomes steeper and more rugged. At Spencer, Mangrove Creek joins the river from the north. From here to the river mouth, road access to the river is limited to a few points.

At Milsons Passage, the river is joined by Berowra Creek from the south. In the area around Brooklyn the river is crossed by the major road and rail services that follow the coast north from Sydney. The river finally reaches the ocean at Broken Bay.

From the confluence of the Nepean and Grose Rivers to the sea, the Hawkesbury River has a total length of some 120 kilometres (75 mi).

Despite forming the effective boundary of the metropolitan region of Sydney for its entire length, there are very few fixed crossings of the Hawkesbury River proper. Going downstream, these comprise:

In the lower reaches of the river there are also a few passenger ferries that cross the river. These include the Palm Beach Ferry service from Palm Beach to Ettalong and Wagstaffe, and the Hawkesbury River Ferries service from Brooklyn to Dangar Island and Little Wobby.

The Aboriginal name for the river was published as Deerubbun in 1870. The two main Aboriginal tribes inhabiting the area were the Wannungine of the coastal area on the lower reaches (below Mangrove Creek) and the Darkinyung people, whose lands were extensive on the lower Hawkesbury to Mangrove Creek, upper Hawkesbury, inland Hunter and lower Blue Mountains. Also known on the banks of the river were the Eora and Guringai people. 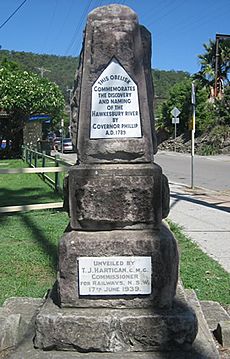 The Hawkesbury River was renamed by Governor Phillip in 1789

In 1789 two expeditions explored the Hawkesbury to the northwest of Sydney and the Nepean River to the southwest. It took about three years to realise they had discovered the same river system. Hawkesbury River was one of the pivotal positions of the Hawkesbury and Nepean Wars, a series of skirmishes and battles between the Kingdom of Great Britain and the resisting Indigenous clans that took place between late 1780s and late 1810s.

The Hawkesbury River was one of the major transportation routes for transporting food from the surrounding area to Sydney during the 1800s. Boats would wait in the protection of Broken Bay and Pittwater, until favourable weather allowed them to make the ocean journey to Sydney Heads. With the opening of the railway from Sydney to Windsor in 1864, farm produce could be shipped upriver for onward transportation by train. However, by the 1880s the river had become silted up between Sackville and Windsor, and Sackville became the head of navigation for sea-going vessels. Until the end of the 19th century coastal steamers linked Sackville to Sydney.

The Hawkesbury River was given its present name by Governor Phillip in June 1789, after Charles Jenkinson, 1st Earl of Liverpool, who at that time was titled Baron Hawkesbury, after the Cotswolds village of Hawkesbury Upton in England, where the Jenkinsons still live. An obelisk was unveiled in 1939 at Brooklyn to commemorate the naming. In 1794, 22 families were granted land at Bardenarang, now known as Pitt Town Bottoms, near Windsor. In that same year, confrontations between Aboriginal people and settlers broke out. 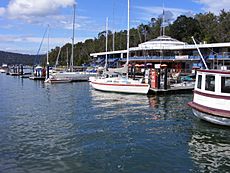 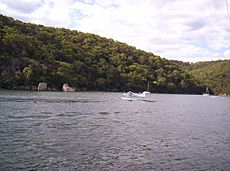 A seaplane on the Hawkesbury River

The Hawkesbury River is navigable from Windsor to the sea. There are no dams or locks on the river, and the effects of the tide are felt as far as Windsor.

Whilst use of the river to carry farm produce and other goods has now largely been superseded by road transport, the river remains the only form of access to a significant number of isolated homes and communities. This is especially true in the lower reaches of the river, where the steep and rugged terrain inhibits road construction. One consequence of this is the operation of Australia's last riverboat postman, a river service that delivers mail to properties on the river between Brooklyn and Spencer.

The Hawkesbury Canoe Classic, a 111 km canoe race, is held annually in October or November. The race starts at Windsor and finishes at Brooklyn. The Bridge to Bridge Water Ski Classic is a water ski race that is run in the opposite direction, from Dangar Island to Windsor. The Australian leg of the Red Bull Cliff Diving World Series takes place in Hawkesbury. Windsor and also Dargle ski park on the Hawkesbury river each year hold a Circuit Boat race meeting with boats travelling from all over country

According to the Hawkesbury Nepean Catchment Management Authority, the Hawkesbury River estuary supports the second-largest commercial coastal fishery of estuary prawns, oysters (prior to the outbreak of QX disease) and fish in New South Wales, with a wholesale value of $6.3 million annually.

All content from Kiddle encyclopedia articles (including the article images and facts) can be freely used under Attribution-ShareAlike license, unless stated otherwise. Cite this article:
Hawkesbury River Facts for Kids. Kiddle Encyclopedia.