Mount Victoria (postcode: 2786) is a small township in the Blue Mountains of New South Wales, Australia. It is the westernmost village in the City of Blue Mountains, located about 120 kilometres (75 mi) by road from the Sydney central business district and at an altitude of about 1,052 metres (3,451 ft) AHD . The settlement had a population of 823 people at the 2011 Census. 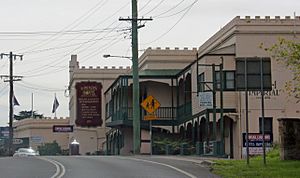 Mount Victoria is located on an escarpment plateau extension of Mount York, the site of a camp on the original Blaxland, Wentworth and Lawson crossing of the Blue Mountains in 1813. The area was originally marked as One Tree Hill on an early map dating from 1834 by the Surveyor General, Sir Thomas Mitchell. This is why when the township was established in 1866 it was known as One Tree Hill.

After the road across the Blue Mountains was constructed a toll bar was opened about 1 kilometre (0.62 mi) east from the present township in 1849 and the area was also known as Broughton's Waterhole Toll Bar. Coaches were charged at the toll according to how well sprung they were, ones without springs were not charged as it was believed they would help crush the road surface.

After the railway station, marking the termination of the Main Western railway line, was opened in 1869 the town also became known as Mount Victoria. The town's name was officially changed after the first Post Office was built in 1876.

By the late 19th century, the town had become a prosperous settlement and many private schools, including The School, Mount Victoria, were founded in the area, which become somewhat of a hill station retreat for wealthy Sydney families. 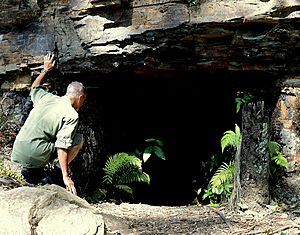 To the south-east of Mount Victoria lies the Asgard Swamp area, now part of the Blue Mountains National Park. The area is the site of a coal mine that was developed in the nineteenth century, but which was ultimately unsuccessful. Six adits were driven into the coal seam by Walter Mackenzie and Thomas Garret, circa 1881. A coke oven was built and it was also proposed to build a tramline from Mount Victoria, but it is not known if this ever happened. The leases changed hands a few times over the years, but no work was done after 1908. Around the south and east edges of Asgard Swamp, there are the remains of huts used by the people who worked the mines. 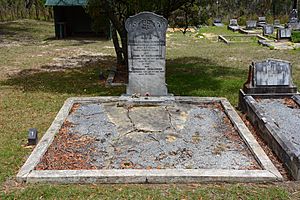 Mount Victoria Cemetery, located one and a half kilometres south-east of the township, was established in 1881. Notable internees include John Berghofer, the builder of Berghofer's Pass at Mount York. (The pass, no longer used for vehicular traffic, has since been included in a network of walking tracks at Mount York. The Mount York area is now heritage-listed.)

Other internees include members of the Lanfranchi family, owners of Marthaville, a heritage-listed house on the Great Western Highway.

Today, Mount Victoria is a small township with a large number of historic buildings and a few attractions including the Post Office, a Hall which is used as a cinema, the Imperial Hotel, the Toll Keepers Cottage and a museum at the railway station.

The town is the starting point for many bushwalks and features several lookouts over the Kanimbla Valley including the lookout from Mount Piddington.

The railway station, along with Lithgow, is the terminus for the Blue Mountains Line. The town is located at the junction of the Great Western Highway and the Darling Causeway to Bell. The Roads and Maritime Services is at present researching a major upgrade to the Great Western Highway with the view to bypass the township and the steep Victoria Pass down to Little Hartley to the west.

Mount Victoria contains a number of buildings with historic significance.

All content from Kiddle encyclopedia articles (including the article images and facts) can be freely used under Attribution-ShareAlike license, unless stated otherwise. Cite this article:
Mount Victoria, New South Wales Facts for Kids. Kiddle Encyclopedia.