Hartley Vale is a small village in the Blue Mountains area of New South Wales, Australia. It is approximately 150 kilometres west of Sydney and 12 kilometres south-east of Lithgow. It is in the local government area of the City of Lithgow.

Hartley Vale is centred on Hartley Vale Road, which stretches from the Governors Causeway to the Great Western Highway. The area is largely open countryside with many substantial private properties, bounded by the River Lett to the north and Mount York to the south. The village is approximately five kilometres west of the Main Western Railway—which runs from Sydney to Lithgow and beyond—and ten kilometres from the nearest railway station at Bell. 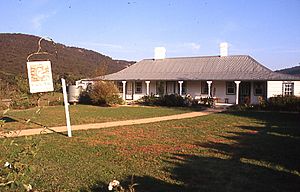 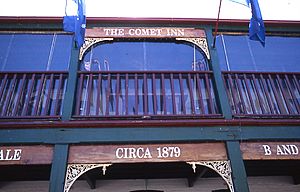 The valley is an historic area where the early roads over the Blue Mountains came down into the plains found to the west of the mountains. The first road through the mountains was built by William Cox from 1814-1815. Parts of his original road can still be seen at Mount York, immediately south of Hartley Vale, and have been incorporated into a walking track.

A kilometre east of Coxs Road is Lockyers Road, which was started in 1828 by Major Lockyer as an alternative crossing to Coxs Road, but was never finished. It goes down into the valley and finishes slightly west of the Hartley Vale village. Another kilometre east is Lawsons Long Alley, which was started as an alternative road by William Lawson, with the aim of avoiding the steep grades of Coxs Road at Mount York. While building the road, Lawson discovered what he thought was coal, but which was in fact oil shale. Mining began in the 1860s and a rail line was constructed into the valley of Kerosene Creek. The incline was designed by Norman Selfe who would also design what is now the Katoomba Scenic Railway. Hartley Vale Station was created on the Main Western Line, but later was abandoned, as was oil shale mining.

Lawsons Long Alley goes through the valley of Kerosene Creek and joins Waltons Road, which goes to Hartley Vale Road on the east side of the village. Lawsons Long Alley and Lockyers Road, along with Coxs Road, were developed as walking tracks by the Department of Lands, New South Wales. They all lead to the Hartley Vale area, culminating at a picnic area just west of the village.

The Hartley Vale area also includes a range of other tourist facilities.

All content from Kiddle encyclopedia articles (including the article images and facts) can be freely used under Attribution-ShareAlike license, unless stated otherwise. Cite this article:
Hartley Vale, New South Wales Facts for Kids. Kiddle Encyclopedia.