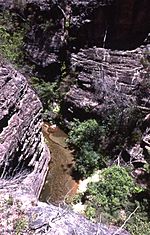 Bell is named after Archibald Bell, Jr., who was the first colonial man to map the route over the Blue Mountains via Richmond. This crossing had been partly explored by colonial explorer George Caley, who went as far as Mount Banks in 1804, but Bell was the first colonial explorer to go the whole way from the Richmond area to the Bell area thanks to Indigenous guides, Darug men Emery and Cogy, who were already quite familiar with the route. The Bells Line of Road was later established along this route.

The area has a small number of properties with an average size of approximately 4 hectares (9.9 acres), and in surrounding areas are various walking tracks, (some in the national park and some on private property) which give views of the Hartley Valley, Wollangambe Wilderness and surrounding areas. Bell is entirely surrounded by native bush, most of which is part of the Blue Mountains National Park. This section of the park is dominated by the Wollangambe River, which begins north of Bell and flows to the Colo River. The area is rugged, stony country with few tracks. A walking trail from Bell gives access to the Wollangambe River and is used as a starting point by experienced bushwalkers venturing into the Wollangambe Wilderness.

As Bell's Line of Road is the only alternative route to the Great Western Highway over the Blue Mountains, Bell is the site of an RTA Heavy Vehicle Checking Station.

The population of the village is less than 100.

All content from Kiddle encyclopedia articles (including the article images and facts) can be freely used under Attribution-ShareAlike license, unless stated otherwise. Cite this article:
Bell, New South Wales Facts for Kids. Kiddle Encyclopedia.